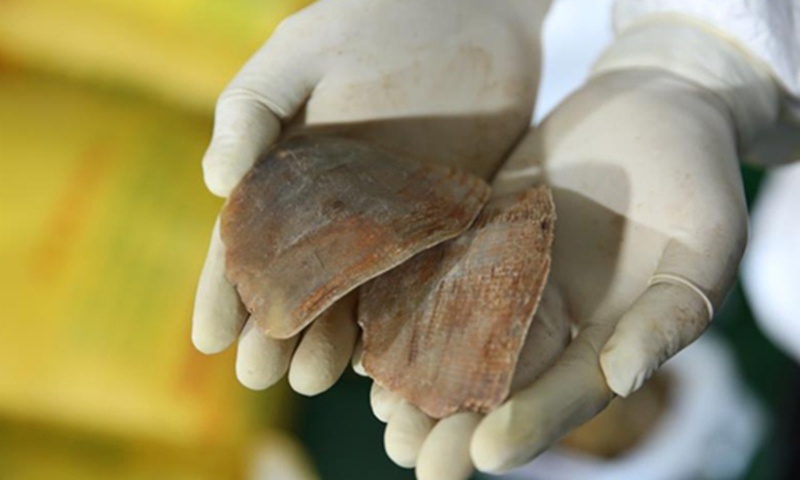 Prison sentences ranging from 15 months to 14 years were handed out to 17 defendants involved in China's largest smuggling case of pangolin scales in recent years involving over 23 tons of pangolin scales smuggled from Nigeria in Africa to South China's Guangxi Zhuang Autonomous Region between 2018 and 2019. A court in Wenzhou, East China's Zhejiang Province, made the judgement on Tuesday.

Two of the defendants surnamed Yao and Wang, who received and sold the scales in Yulin, Guangxi, were given prison sentences of 14 years and 13 years, respectively, and had their personal assets, worth 4 million yuan ($619,184) and 3 million yuan, respectively, confiscated.

The other defendants were given prison sentences ranging from 12 years to 15 months. In addition, their personal assets were confiscated or they were fined.

In 2018 and 2019, Yao and Wang received and sold pangolin scales purchased from Nigeria in Africa by a smuggler surnamed Cai (dealt with in a separate case) who commissioned a smuggling gang to smuggle the scales into China, according to Wenzhou Intermediate People's Court.

Yao and Wang sold the smuggled pangolin scales to two defendants surnamed Yuan and Zhang in Yulin, Guangxi, who sold the scales further on to others.

"Strict sentences are given to criminals involved in smuggling activities of wildlife and related products, which aim to deter those who attempt to follow suit; however, we cannot be too optimistic that an individual case can completely curb such smuggling behaviors, since the smuggling of wild animals and their products is still rampant in China based on the low seizure rate at customs and the deformed demand in the domestic market," Zhao Guohua, an expert on customs law and lawyer from Beijing Mingji Law Firm, told the Global Times on Tuesday.

The total value of the 23 tons of pangolin scales amounted to 182.88 million yuan.

The scales were identified as those from African tree pangolins listed in the Convention on International Trade in Endangered Species of Wild Fauna and Flora; they are completely prohibited in international trades, Metropolitan Express reported.

It was estimated that the 23 tons of scales came from nearly 50,000 pangolins, which were previously considered as one of the possible intermediate hosts for COVID-19.