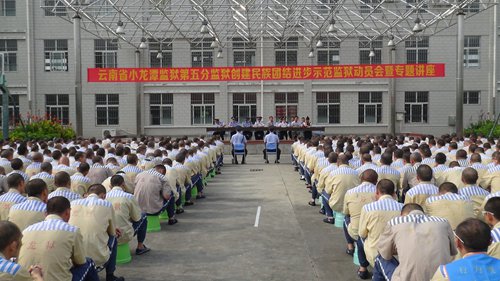 Prisons in provinces and regions with  large numbers of ethnic minorities have been promoting ethnic unity among inmates, which experts hailed as an important move to safeguard social stability.

At Yunnan's Xiaolongtan Prison, where half of the inmates are ethnic minorities, prisoners listen to stories of ethnic heroes, attend lectures on ethnic unity and watch minority group dances.

The prison also teaches the inmates the meaning of ethnic unity through ancient Chinese classics like the "Three Character Classic," or San Zi Jing, and gives them brochures on ethnic policies.

China has 56 ethnic groups, with the Han being the biggest. In peacetime, ethnic unity is still necessary to maintain national stability as ethnic misunderstanding has been threatening the stability of prisons.

"Different beliefs, customs and habits cause poor communication and misunderstandings, which lead to conflicts among ethnic groups in prison," Zha Jianyong, deputy head of the fifth branch of the Xiaolongtan Prison, told the Global Times.

Prisoners also study patriotism and the documents released by the 19th National Congress of the Communist Party of China. It helps them realize that "the Han people and the minorities are inseparable," Wang Chunhua, the head of the Xiaolongtan Prison, told the Global Times.

A Uyghur prisoner, who is serving a life sentence for trafficking drugs and who asked not to be named, said the prison program helped him better understand different ethnic cultures.

"When I first entered prison, I could not speak Putonghua, but now I can speak and write," the inmate said.

The Aksu Prefecture Prison in Xinjiang has implemented similar programs. Inmates are taught ethnic policies and how to safeguard ethnic unity.

Ethnic unity is also a crucial part of prison life in the Tibet Autonomous Region Prison, which holds around 1,000 inmates - the most in the region. The prison has its own textbooks in both Tibetan and Putonghua, and has offered lessons in Putonghua, the Tibetan language and taught prisoners math since 2012.

In the Ningxia Hui Autonomous Region, where about a third of its population are ethnic Hui, the Ningxia Women's Prison has provided lessons to all police officers in the prison, asking them to respect the habits and religious beliefs of Muslim inmates, news site china.com.cn reported.

Zhu Weiqun, former head of the Ethnic and Religious Affairs Committee of the National Committee of the Chinese People's Political Consultative Conference, told the Global Times that while China has made progress in promoting ethnic unity, the work will continue. "The long-term goal of ethnic unity is to unite and integrate different ethnic minorities."