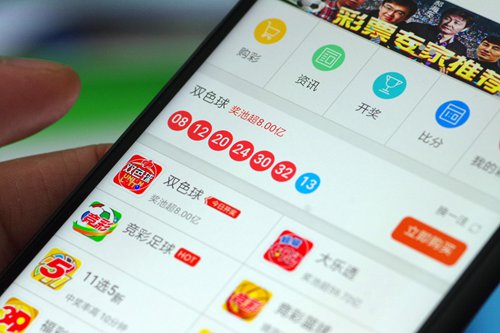 China's crackdown on online lotteries during the FIFA World Cup has shown the red card to crazy fans who were having the best of both worlds — enjoying the soccer festival and trying to make a fortune by betting on it.

Despite banned by the Chinese government in 2015, there was a robust surge in online lotteries as the tournament began in Russia, even though the Chinese soccer team did not make it to the World Cup.

The government is concerned that online lotteries, driven by profit, may give access to underage teenagers or create other management loopholes, while others complain about the inconvenience of going into a lottery store and said the ban has prompted many to bet in WeChat groups or go to foreign websites.

During the World Cup this year, mobile apps and websites selling the lotteries have flourished, with some topping the app store list, including the Tiantianaicaipiao, Renrenzhongcaipiao and Caipiaocaipiao.

After the official clampdown, however, such platforms and those backed by Weibo and Tencent have suspended operations, CNR reported. Many such websites come up with this notice when one tries to log on: "System is under maintenance and upgrade."

"Purchasing lotteries online has always been illegal. Relatively lax supervision by authorities led to a spike in recent years," Adrian Geng, the CEO of Sina Caitong, told the Global Times.

Operators are willing to take risks because of the allure of huge profits, Geng added.

Under lottery management rules, no entity shall carry out the business of sale of lottery via internet without the approval of the Ministry of Finance. All sports lottery tickets are sold offline through branches run by the General Administration of Sports.

If lotteries were sold widely online, underage teenagers who are not allowed to bet would get access. Income from online sales cannot be identified at a provincial level as Chinese lottery sales are province-based, Geng explained.

As of June 20, the National Sports Lottery Center suspended thousands of sales terminals involved in online ticket sales in many provinces, Xinhualuncai, a WeChat account specializing in lottery, reported. The number of suspended machines was expected to reach more than 6,000 on June 21, the report said.

Geng said that meeting social responsibility, rather than making money, is the ultimate goal of the National Sports Lottery Center. "That's why the center wouldn't use the FIFA World Cup to advertise itself for more revenue."

Total sales of China's sports lotteries in the week from June 18 to 24 stood at 11.83 billion yuan ($1.7 billion), while it was only 1.6 billion yuan a week before the World Cup, data released on sporttery.cn, official website of lottery SMG, shows.

Even though online lottery is banned, Chinese gamblers still have many options to taste the thrill of betting.

Xue, a PhD student based in Shanghai, said that many of his friends use private gambling in WeChat groups, in which one person is the "banker" and provides winning and losing rates. "Mobile payment on Alipay and WeChat allows us to gamble in private with small amounts of money more conveniently. We don't have to choose online lottery," Xue told the Global Times.

"I feel everyone is betting this year during the World Cup. Even many people who don't watch soccer matches are into it," he said.

Foreign gambling websites also illegally sneak into the Chinese market in an effort to take a share of the spoils, which results in huge outflow of capital of Chinese citizens, Chen Haiping, a researcher at the Gaming Lottery Research Center of China with Beijing Normal University, told the Global Times.

Some stores or groups on platforms such as Taobao, WeChat and QQ have also been found claiming that they are commissioned to sell  lottery, according to Nandu Daily.

Lottery is seen as a welfare project in China. Its issuers are not motivated by the market, only routinely raising funds to meet the financing gap of the government for good causes, Chen noted.

But the trend of internet, said Chen, is irresistible and the lottery has already developed into an industry involving tourism, amusement and culture. There has been talk of opening online lottery services inside Chinese government circles in recent years, but since different interest groups are involved, the progress has been slow.