As the popularity of beauty pageants declines worldwide, China has fallen in love with a different type of charm contest-dog shows. The craze has seen owners nationwide showing off their pooches, and also produced a value chain for the breeding of pedigree animals. 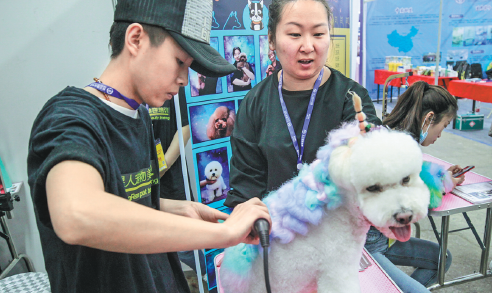 A contestant is groomed before a show in Shenyang, Liaoning province, last year. (Photos: China Daily)

Wang Zhuang, a 28-year-old from Shenyang in the northeastern province of Liaoning, runs a kennel where he breeds shiba inu-a small dog native to Japan-many of which have taken part in shows in recent years.

"At first, I was just a dog lover, but then I learned about the Westminster Kennel Club Dog Show in the United States and I became obsessed with these events," he said. "Now, I'm a regular participant in dog shows."

However, although he enjoys taking part in shows, his main interest lies in learning more about shiba inu and how he can breed high-quality, pedigree specimens.

"There is a set standard for evaluating shiba inu. I can only get to know the standard better, and my dog's good and bad points, by taking part in shows," he said.

"Dogs are not tamed by us, they are our family members, and that, I think, is the most important philosophy for dog owners. My favorite dog, named Run, won two BIS (Best in Show) awards when he was only 10 months old. But he is a naughty boy who drove me mad when he was a puppy.

"However, the little rascal is very timid, so he shies away from anything dangerous. He doesn't even dare jump off my 20-centimeter-high couch," he said with a laugh.

Wang noticed that Run regularly gnawed things, such as furniture or toys, which was annoying but also indicated that the puppy was curious about new things.

"I started training him by using new toys and novelties. For example, I gave him rewards when he obeyed my orders, which made me feel proud," he said.

"Run can even make a bow with his little paws, just like saying 'Thank you'! The gesture wins him affection at shows, from the judges and the audience."

Dog shows originated in the United Kingdom in the mid-19th century as a way of determining which dog could be crowned champion canine. Over the past century, they have gradually developed into gentle beauty contests, where the contestants' bloodline, appearance, posture and character are assessed.

In 1911, the Federation Cynologique Internationale-a collection of national clubs that is recognized as the world's largest canine organization-was established in Belgium, with its headquarters in the town of Thuin.

In 1971, the FCI held the first World Dog Show, which quickly became known as the "Olympics for Dogs" and helped canine pageants gain huge popularity across the Western world. Since the turn of the century, dog shows have become increasingly popular in China.

In 2006, the country's first professional canine organization-the China Kennel Union-was founded, and the shows it organized attracted large audiences. In the same year, the CKU was included as one of the 92 contracted partners of the FCI. 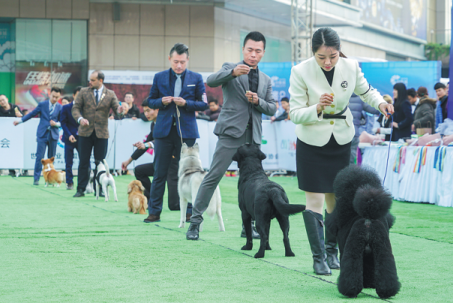 Handlers show pedigree breeds at a dog show in Hangzhou, Zhejiang province, in 2017.

"Dog shows have enjoyed a boom time in recent years in China as purebred dogs receive greater recognition across the nation," said Wang Lijia, director of the CKU office in Changchun, capital of the northeastern province of Jilin.

"Pets are also family members. People now want more quality dog breeds in case some genetic disease may prevent a long relationship and companionship with the animal. So they come to shows to learn more about pedigree dogs."

According to Wang Lijia, when the CKI was established, there were about 10 dog shows in China a year, but the number has soared to 80 or even 100-plus as the events grow in popularity.

"In May, the FCI-hosted World Dog Show was held in Shanghai. Nearly 2,000 dogs from different countries and regions took part," she said. "It was a stage to show China's achievements in breeding techniques and the good conditions pedigree dogs enjoy in the country."

The dogs that took part in the show were top performers that had undergone strict assessment to win their titles. Those triumphs required great efforts from their owners, who also spent a lot of money to ensure success, she added.

Haruko Mizukoshi, from Japan, who has been a judge at dog shows since 2010, said dogs are usually assessed on things such as balance and gait, bark and character, but the animal's lineage always takes top priority.

"Judges must have a good understanding of the standards, be familiar with everything about the dogs, and display artistic sensibility and scientific knowledge," she said.

Mizukoshi added that the comprehensive standards are designed to identify defective genes and improve future generations.

Wang Lijia, director of the CKU's Changchun office, said the aim of dog shows is to produce high-quality specimens.

"It helps to protect the animals, because we choose healthy dogs with good characters, which helps to reduce the possibility of their descendents being abandoned or abused as a result of physical defects," she said.

The greater recognition of pedigree dogs and the quest to breed and own show champions has prompted the emergence of businesses related to breeding. Dogs that qualify to enter shows are about 10 times more expensive than regular canines.

In October 2017, Wang Bing, director of the Crape Myrtle Kennel in Chengdu, capital of Sichuan province, told Chengdu Economic Daily that customers prefer to buy the offspring of show dogs because of their superior bloodlines and excellent health.

The more awards a dog wins, the higher the price of its puppies. Wang Bing said most of the 20-plus dogs he owned were show dogs and their puppies could cost tens of thousands of yuan or sometimes more than 100,000 yuan ($14,200).

The whopping prices didn't deter customers, but attracted them because many scammers offered dogs in poor health at low prices.

Wang Bing said it took a great deal of effort and money to produce show dogs and high-quality purebreds. As a result, by October 2017, he had only bred 62 dogs in the previous nine years, selling 48.

"The puppies are available via presale, so customers are required to reserve them at least six months in advance," he said.

Lam Gin-dik, a 44-year-old from Hong Kong, is a trainer and handler at dog shows. He runs his own kennel in Beijing, where he breeds Bernese Mountain Dogs.

"It takes about a month for me to train a dog to get it ready for a show. The dog must be a purebred, with good looks and health," he said. "The owner usually pays the handler about 3,000 yuan to train the dog and provides a bonus if the dog wins a prize at a show."

He said it costs at least 10,000 yuan a year to train each dog and enter it for shows in China: "The expenses cover food, grooming and a training course. The cost rises if the owner wants to enter their dog in a show overseas."

Wang Zhuang, the kennel owner in Shenyang, said that even though dog shows have received greater recognition in China in the past decade, it remains a niche activity that needs more promotion to help regulate training and breeding, which would bring a positive influence to bear on the market.

"From my perspective, breeding or selling show dogs is not just about money; it is a platform to find friends with the same desire to produce quality animals," he said.

"Some irresponsible kennels are eager to make a profit, so they buy stud dogs simply for reproduction, but the puppies they sell are mainly in poor health. I hope that these shows will ensure that more dogs-pets or show breeds-will be valued and respected by people."