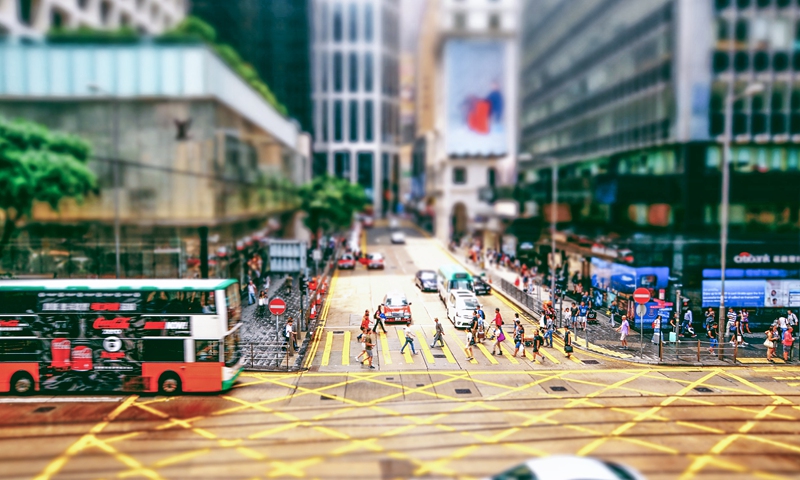 Some pro-secessionist Hong Kong textbooks have been reported by students' parents for presenting dreadful images of Chinese philosopher Confucius, smearing the Confucius Institute as "political hype" and using outdated sources to belittle China's development.
The textbook, Modern China, was issued in 2019 and taught in class at a local high school. However, its false representations were soon spotted by students' parents and posted online recently, as the "majority of the content reflect prejudiced views on China from some Western countries, which are filled with sarcasm and smearing lies," parents were quoted as saying by Wenweipo on Saturday.
Confucius, a renowned figure who is admired and recognized worldwide, was portrayed with a demonic smile on his face and guns, knives and other weapons in the background; While the Confucius Institute, set up to bring about cultural exchanges between China and the rest of the world, was described as a "political hype" and "ideological propaganda."
Cartoons right next to the descriptions depicted a terrified looking foreigner sitting on the ground, with a caption saying, "[The image] reflects the views of the international community, and questions China's political ambitions to establish Confucius Institutes in foreign countries," Wenweipo reported.
Turning a blind eye to China's development during the past decades, the textbook deliberately introducedg outdated sources from 2010 to compare China's national strength with that of the US, Russia and Japan, saying that apart from population and military strength, "all other fields lag behind," as quoted by local media.
While making great efforts to create misconceptions about China, it made no mention of issues such as the failed handling of wildfires in Australia, racial discrimination in the US, and the botched Brexit process in the UK, "as if the textbook is trying to stir up hatred between Hong Kong and the Chinese mainland by deliberately picking up flaws and weaknesses," a student's parent said, Wenweipo reported.
Publishers said that they have voluntarily submitted the textbook in question to the education regulator in Hong Kong for consultations, and corresponding revisions regarding the Confucius Institute and outdated sources have been made, media reported.
A total of six publishers and eight textbooks went through the consultation in mid-August, which was conducted by a team of education professionals appointed by the bureau.
In July, the Hong Kong education bureau vowed to remove textbooks and reading materials in schools that involve inciting subversion, separatism and other illegal content forbidden by the newly enacted National Security Law for Hong Kong, and will regularly check if such books exist within campuses.
Schools have the right to prepare textbooks for their students under the guidance of the bureau, but they should also carefully examine books that are selected. If problems emerge, the bureau will follow through.