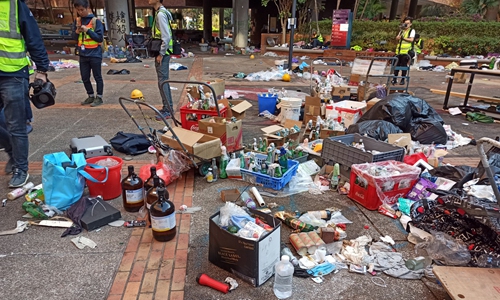 Hong Kong's educational regulators announced on Wednesday that they have investigated more than 60 of 106 public complaints made from June to the start of November, of teachers suspected of glorifying the violence in the social unrest and insulting police, and are considering punishing teachers involved in 30 verified cases.

The Education Bureau of the Hong Kong Special Administrative Region made the announcement on Wednesday at a press conference.

Kevin Yeung Yun-hung, the secretary of the bureau, told media that if misconduct is proven, it will consider necessary disciplinary actions, which include a warning, a reprimand or even de-registration if their offenses are very serious in nature, according to a transcript of remarks posted on the bureau's official website.

The bureau said it has no comment on the number of teachers arrested due to legal procedures, Wen Wei Pao reported, and the bureau has asked the school to consider suspending a teacher arrested on Monday in Sheung Shui for alleged illegal assembly and possessing offensive weapons.

Global Times learned that 106 cases were all related to teachers' improper comments and teaching materials.

The bureau said among the 60 cases, two teachers who cursed and insulted police and their families on social media were involved.

Wong Kwan-yu, the president of the Hong Kong Federation of Education Workers, said that teachers are not supposed to spread their political views in the classroom. However, some young teachers touched the red line by spreading comments and assigning homework designed to distort the truth of illegal protests and violence, which produced a negative impact on the students.

Hong Kong SAR Chief Executive Carrie Lam said at Tuesday's press conference that the Hong Kong police have arrested more than 6,000 people since June 9. Among them, 2,393 or about 40 percent are students, and about 300 high schools in the city were involved.

Considering the difficulty of getting evidence from classroom discussions, some investigation work is still needed, that's why only 30 cases were verified so far, Wong noted.

Besides teachers, some high-tier officials should be blamed as well. According to Wong, legislators representing Hong Kong's education authorities, as well as the city's largest teachers' union, often hold a permissive attitude towards violence and hatred, using freedom of speech as an excuse.

Wong said that the bureau and government are too "polite," and they should release more information about "problematic teachers" to the public.

Li Xiaobing, an expert on Hong Kong, Macao, and Taiwan at Nankai University in Tianjin, told the Global Times that the move of Hong Kong's Education Bureau is of a tentative nature. If the public response is positive and supportive they will take a tougher stance against "problem teachers."

Li noted collective efforts from society are needed to help students establish the correct values, and understand history correctly. Schools should be more active in positively influencing public opinions, and the government should take a tougher stance in supporting the education bureau.

Lam slammed the violence and illegal activities in universities and asked the Secretary for Education to seriously follow up the case of a teacher after he and 11 rioters were arrested for carrying flammable weapons and instruments for road blockage and vandalism.