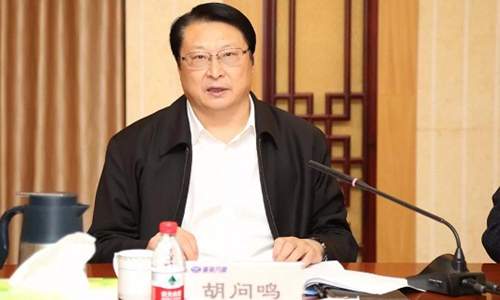 Hu, former Party chief and chairman of the China Shipbuilding Industry Corporation (CSIC), is being investigated by the Communist Party of China Central Commission for Discipline Inspection and the National Supervisory Commission, according to a statement the commission released on its website on Tuesday.

As the chief commander of China's aircraft carrier program, Hu oversaw the development of China's first domestically developed aircraft carrier and also the country's second one, later known as the Shandong, when it was commissioned into the Chinese Navy in December 2019.

On August 30, 2019, Hu, then aged 62, retired from his position as CSIC's Party chief and chairman, the company announced then on its website..

CISC, now merged with the CSSC, was responsible for the research, design, production, testing and support missions for naval weaponry and equipment including aircraft carriers, conventional and nuclear powered submarines, surface vessels and underwater weapons, according to publicly available information.

Song Zhongping, a Chinese military expert and TV commentator, told the Global Times on Wednesday that Hu's case will not have any major impact on China's military programs.

Each military project would involve many units, and the group company, namely the CSIC, is only responsible for the overall and comprehensive strategy, for which a collective decision-making mechanism is applied, Song said.

Hu is the former head of the CSIC, so he is not in charge of China's major naval projects anymore and the investigation into Hu won't have any impact upon current major industrial defense projects, the anonymous expert noted.

"A great nation's national defense won't be shaken by a few problematic officials," he said.

Hu's probe came after Sun Bo, former general manager of the CSIC, was probed by the CCDI in 2018.

Sun was eventually sentenced to a 12-year jail term for corruption and abuse of power on July 4, 2019, according to the people.cn, website of the People's Daily.

Song said while no major impact is expected due to certain individual cases, they have sounded an alarm on China's arms industry, because so many important projects could be involved.

"Anti-corruption must always be at the forefront," Song said.