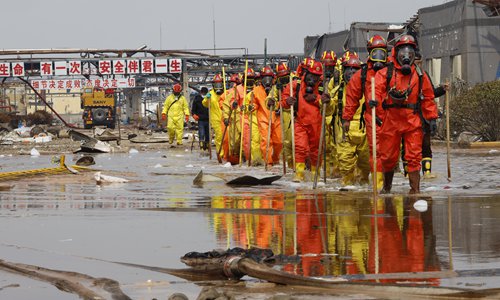 Members of the rescue team wear protective clothing and masks as they enter the Tianjiayi chemical plant on March 24, 2019. (Photo: Global Times)

A feeling of helplessness swept over the Global Times reporter after entering the Tianjiayi chemical plant in the Xiangshui county of Yancheng, East China's Jiangsu Province, on March 24, three days after a massive explosion there claimed 78 lives.

Roads were covered with stained water and mud. Wearing a pair of oversized protective shoes, the reporter waded through water that came up to the ankles.

Rescue staff told the reporter that water had come up to the knees in some places in previous days.

Many nearby buildings had been destroyed, their rubble looking like burnt roughcast housing. Pipelines collapsed and lay tangled over each other on the ground.

Iron sheets hanging outside the buildings flapped in the wind, making harsh noises in this scene of desolation.

Smells of chemicals - a mixture of acid, base benzene and other unknown materials - lingered in the air. They got stronger as the reporter went deeper into the plant.

A firefighting truck was silently sprinkling foam onto what remained of a giant benzene tank that is about two floors high.

It was one of the tanks - two benzene and one methyl alcohol tank - where the explosion started. Not far from the tank, grey smoke continued to spew out of a tall chimney.

An eye-catching slogan read: "Humans have only one life, safety stays with you always." It was still hanging above the main road in Tianjiayi even after the plant had turned into a perfect shooting location for a dystopian horror film.

The explosion happened at about 2:48 pm, March 21, following a fire that broke out in the plant. It affected 17 factories and zones in a local chemical industrial park covering a 1.1 square-kilometer area, according to rescue authorities.

Firefighters and vehicles in the sealed off area around the Xiangshui chemical industry park on March 24. Photo: Li Hao/GT

A local clothing shop owner surnamed Qin told the Global Times reporter that she felt a slight tremor at the time but did not pay much attention to it.

It was not until a customer came into the shop that Qin knew what had happened.

The reporter met Qin around 8 am on the morning of March 23 at a local square where about 50 people were lining up to donate blood.

Qin was one of the volunteers helping and had just received test results that said she could donate blood. "I'm so glad that I meet the donor conditions. I want to do anything I can to help," Qin said.

From March 21 to March 28, a total of 1,153 Xiangshui residents had donated more than 430,000 milliliters of blood, the Xinhua News Agency reported.

Local volunteers could be spotted everywhere in the hospital, at rescue scenes and with victims' families. Their rapid and organized response impressed the reporter.

As early as 7 am in the Xiangshui People's Hospital, volunteers were already in place to hand out food, drinking water and help maintain order. As of March 28, more than 50,000 free meals had been delivered to the injured and their families, medical staff as well as rescue and relief workers on the front-line, according to Xinhua.

Lu Jun, the chief of staff of the Jiangsu provincial fire and rescue team and vice general director of rescue work in Xiangshui, told the Global Times that more than 300 firefighters and rescue workers had gone into action immediately after the explosion.

In total, 930 firefighters and 195 fire trucks were summoned from across Jiangsu and sent to Xiangshui to help, Lu said.

The Global Times reporter saw fire trucks, communications vans and medical tents lined up on road sides in the isolation area. Rescue workers used drones to monitor the situation inside the park and determine the next phase of the rescue plan.

Among the 78 people who died in the accident, 22 were still unidentified as of March 25, according to local authorities.

Lu said that the police were busy conducting DNA tests to identify the remaining victims as soon as possible. Rescue teams had taken some families to factory dormitories to get the victims' toothbrushes in order to carry out the DNA test. 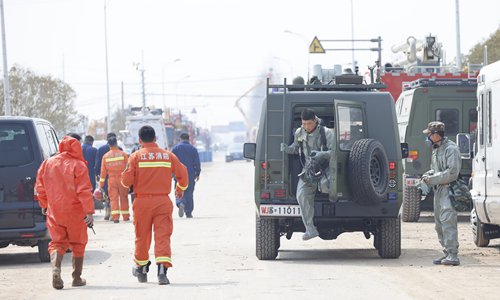 Firefighters and vehicles in the sealed off area around the Xiangshui chemical industry park on March 24, 2019. (Photo: Global Times)

The Xiangshui tragedy happened because some local governments and companies failed to learn lessons from previous cases and were not serious about improving safety, an emergency team dealing with the accident under the State Council said at a meeting on March 23.

The Tianjiayi plant has been punished and fined many times but the owners persisted in their old ways, which eventually resulted in the tragedy, according to the meeting.

Media reports showed that from 2016 to 2018, Tianjiayi received six administrative punishments from the Xiangshui environment bureau for air pollution and discharging waste in violation of regulations. Its chairman Zhang Qinyue was sentenced to 18 months in jail with a two-year probation in 2017, the Beijing Youth Daily reported.

Information on China's Ministry of Emergency Management's website shows that Tianjiayi was urged to rectify a total of 13 safety hazards during a work place safety inspection in February 2018, including the lack of warning signs and contingency measures for benzene leaks.

In the wake of the Xiangshui tragedy, the emergency ministry on March 27 vowed to strengthen the control and management of dangerous chemicals nationwide.

Authorities at all levels should inspect enterprises that are involved in nitration manufacturing and storage to make sure they comply with regulations on dangerous chemicals.

The ministry said that a revised law on production safety could be launched within this year and a blacklist system would be established to motivate chemical plants to take the initiative in production safety.