Professor uses physics to tackle problems behind the beautiful game 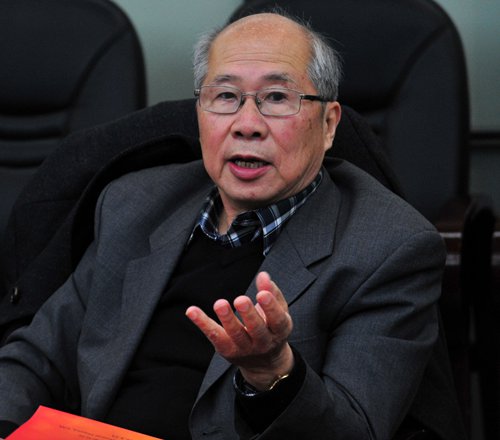 While many people denounce the pathetic performance of Chinese football in international games, one retired physics professor is trying to understand the reasons behind the failure of the sport in this country. Ge Weikun, a 76-year-old physics professor, was soaked in sweat playing football even when pollution levels in Beijing were off the charts.Ge from Tsinghua University recently became something of an internet celebrity, not for his impressive achievements in physics, but for his study and analysis of football using physics theories. This unexpected fame came a while ago after he delivered a lecture at a conference in Beijing illustrating physics theories behind football techniques.   The lecture went viral, and is reported to have left many football fans "suddenly enlightened." It is not the first time that Ge has attempted to assist Chinese football in some way using his scientific knowledge. A die-hard football fan, Ge has been paying close attention and making contributions to the sport for a long time. In 2014, together with several other professors, he launched an online course called Football Sport and Science, which continues to bring in viewers every year. But at the same time, his deep engagement with football has also brought about controversy, with some saying that he is being "overly officious." ""I would be quite willing to discuss football techniques with anyone. But such blind accusations are just meaningless," said the silver-haired academic. Making headlines"Can a physics professor diagnose the problem with Chinese football?" is the kind of eye-catching headline on a number of reports describing Ge's involvement in the sport. Impassioned by his lecture, many also turned to the videos Ge and several other professors produced for the online course on football and science. To date, more than 30,000 people have signed up for it.In one of his videos, Ge explained why a David Beckham kick can curve the way it does, and he also uses mathematics to describe how a kick can suddenly drop from its trajectory. Ge told the Global Times that his theories come from a book on football and science which he happened to spot when attending a conference in the UK. Since then Ge has deepened his understanding of football and for the first time learned that the sport could be analyzed from a scientific perspective. Although it might be too much to expect a physics professor to come up with a panacea for the ills plaguing Chinese football, Ge is doing everything he can to make a contribution to the sport. Ge graduated from Peking University and then studied in the UK, before teaching in the US. His more than 20 years of living outside the Chinese mainland has allowed him to perceive more clearly the problems Chinese football is facing. After returning to Tsinghua University in 2008, he immediately joined the staff football team and later a research center for football. The center is used to hold forums, invitational tournaments and publish football-related reports among other things. "Science can help football in various ways, whether it is physics or computer science or information technology. For example, with big data, people can track the movement of the ball and the players, which is important both for the coach and the players," said Ge.Besides shooting videos, Ge has also written articles on WeChat regularly since 2017, analyzing almost every major match. Love of the gameGe is a vivacious and open-minded man, laughing frequently during the interview. While it's fair to say he is an accomplished academic - he is a Professor Emeritus of The Hong Kong University of Science and Technology and has published hundreds on core journals - his research into football is driven by sheer love.Ge was born in the middle of the War against Japanese Aggression, and was also affected by the Cultural Revolution (1966-76), which began after his graduation from Peking University. Spending his childhood in Beijing, Ge told the Global Times that unlike today, their only source of fun back then was kicking a football about on the streets. Two of his friends went on to become professional football players.  Anyone who is serious about sport faces a difficult choice between going professional and continuing with their studies, since becoming a professional player means one has to give up schooling completely. Ge managed to get into the best middle school in Beijing and became an amateur track and field athlete. It wasn't until Ge went to study in the UK in the late 1970s that he picked up football again. After that, he studied and taught overseas for more than 20 years, and wherever he went, he organized football teams among Chinese students, with himself as the coach. Ge proudly recalls that in 1991, while teaching in the US at Dartmouth College, he helped organize the first invitational tournament among Chinese and US students, and the team he led beat the Yale University team 1:0 in the final. After returning to China in 2008, Ge joined the football team in Tsinghua and would play every Wednesday, come rain or shine. "It has become a habit. It makes me happy and healthy," said Ge. 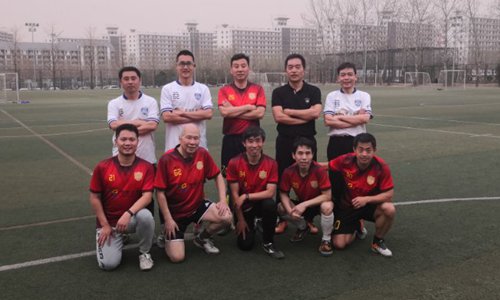 Lacking a cultureMeanwhile, Ge, who is more eager than most to see a rise of Chinese football, bluntly states that what China lacks most is "a culture for football," by which he means the position that the sport holds in life and society. Having spent years abroad, Ge has seen how football can be part of the culture in countries like the UK and Germany. "In Manchester, there are so many clubs for people to join and communicate with," said Ge who got his PhD from the University of Manchester. As he observes, this lack of football culture causes several problems, such as a separation between training and school education. "Under the current situation, it is impossible for children at school to spare much time for football," said Ge, "When it cannot coexist with study, most parents will choose study over football." "When the Chinese team lets people down, people always say 'Why is it so hard to choose 11 good players out of 1.3 billion?' But the fact is, we choose those 11 out of only 6,000 registered players," said Ge, "The number in Japan is 600,000 and 6 million in Germany." He also criticizes the misunderstanding that "kicking a football does not need a high IQ." "On the contrary, football is a sport that requires high-level intelligence, cultivation and civilization," said Ge, calling for the development of "campus football" that also emphasizes other aspects of players' education.The lack of football culture has also resulted in a utilitarian attitude toward the sport in society, Ge said. "While it is a sport that stresses teamwork, in China many coaches mostly teach the players how to improve their own ability," Ge analyzed, which he sees as reflecting a tendency to heroism in society. But Ge remains optimistic and believes that given the country's emphasis on developing the sport, football will see big progress in the coming years. "You will make it if you spare no pain."He is also planning to write a book to illustrate the relationship between football, culture and science to enhance Chinese people's understanding of the sport he loves.