JIUQUAN, June 16 (Xinhua) -- Among the three crew members aboard the Shenzhou-12 spaceship, Tang Hongbo is a space rookie.

After preparing for over a decade, Tang's space dream is finally coming true. 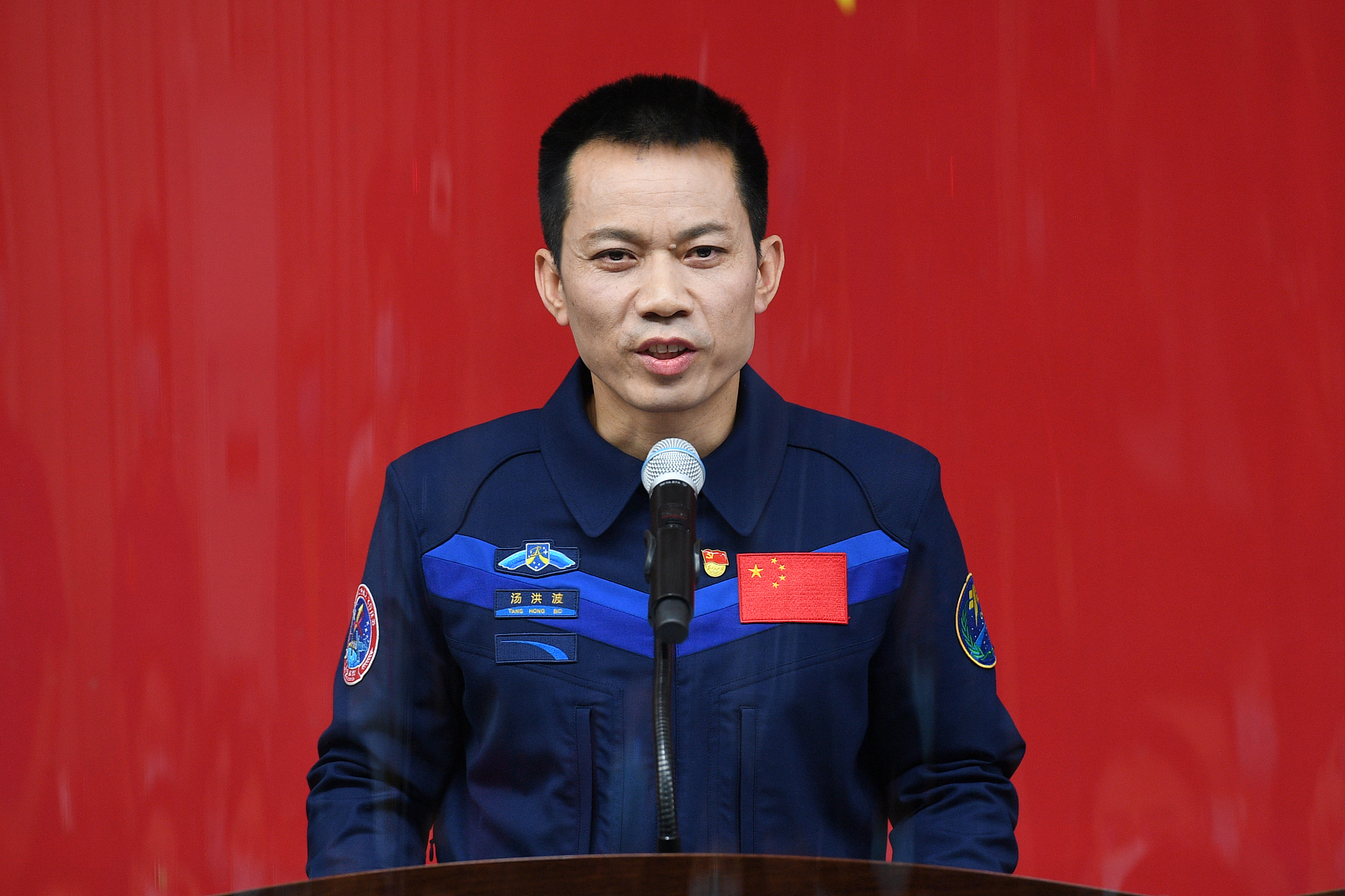 "I am very proud to be selected into the Shenzhou-12 spaceship crew," Tang said at a press conference on Wednesday.

"This is my first spaceflight mission, and pressure is inevitable," the 45-year-old astronaut said, "But after 11 years of learning, training and testing, I am full of confidence in myself and our team."

Born in 1975, Tang joined the People's Liberation Army in 1995 and clocked 1,159 hours of safe flight. He became a member of the second batch of Chinese astronauts in 2010.

He was selected as a backup crew member for Shenzhou-11 in 2016.

The Shenzhou-12 spaceship is expected to be launched on Thursday morning. This will be the first manned mission during the construction of China's space station, and the crew will stay in orbit for three months.

When asked about his expectation for this mission, he answered with a smile.

It has been 11 years since Tang was selected into the second batch of Chinese astronauts.

"When Liu, Wang and Chen flew into space, I asked myself when could I realize my space dream and use what I have learned?"

Tang told himself to "start from scratch," and keep training with devotion and diligence like a fresh trainee for his space dream.

"Tang is modest and always eager to learn. I have full confidence in this crew, and I trust Tang very much," said Nie Haisheng, another member of the Shenzhou-12 crew, which also include Liu Boming.

In his training preparation, Tang was confident about his physical strength and endurance.

"I could get very tired during training, but I would always get over it."

In the underwater training designed for extravehicular activities (EVA), however, he met an unexpected challenge -- he was having a hard time getting used to the extravehicular spacesuit.

"I am not used to wearing a watch or hanging any additional things on my body. At the beginning of underwater training, I felt restless and just wanted to get rid of the suit right away."

The setback troubled him. "I have prepared for so many years, is this the end of it?"

Tang asked Liu Boming for advice. Liu told him that he had to overcome it by himself. He found some tricks, such as turning down the temperature inside the extravehicular suit to make himself calmer. He also learned psychological self-adjustment methods taught by the training center.

When Tang felt unbearable in the suit, he would take a break and used the techniques he learned to calm down. Then he would get back into the suit and continue training.

Gradually he was able to work in the extravehicular suit for hours without feeling uncomfortable.

"Tang is the most hardworking one in the second batch, very diligent in study and reliable in work. He will be a good help to us," said Liu Boming.