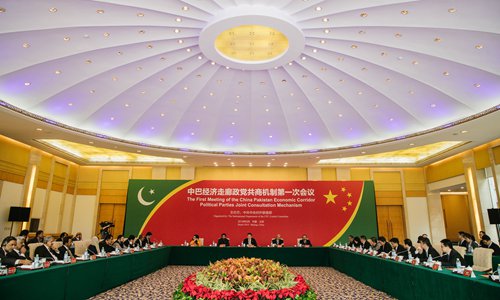 Representatives of China and Pakistan attend the First Meeting of the China Pakistan Economic Corridor Political Parties Joint Consultation Mechanism held in Beijing in March to discuss cooperation and implementation in Pakistan of the China-proposed Belt and Road Initiative. (Photo: GT)

China-Pakistan cooperation in the next phase will focus more on benefiting people through local projects that improve livelihood along the Chi­na-Pakistan Economic Corri­dor (CPEC), Chinese experts said on Monday as Chinese Vice President Wang Qishan was visiting Pakistan and the two countries boosted their cooperation on multiple projects.Wang arrived in Islamabad on Sunday for his three-day visit until Tuesday, the Xinhua News Agency reported.Zhao Lijian, a senior diplomat at the Chinese Embassy in Pakistan, tweeted on Monday that the two countries signed five memorandums of understanding including 1 billion yuan ($145 million) for the social sector and 40 million yuan for disaster relief.Lin Minwang, a professor at Fudan University's Center for South Asian Studies, told the Global Times that "the new [Pakistani] government hopes construction of the CPEC brings more benefits to the locals, so Wang's visit and the documents signed by the two countries show that China is giving a positive response and taking concrete steps to support its partner."Wang and Pakistani Prime Minister Imran Khan on Sunday launched four mega development projects in the fields of energy, technology and education under the CPEC, according to the website of the corridor project.The first project is a 660-kilovolt transmission line to be laid between Matiari and Lahore and transmit power from coal plants located at Thar, Port Qasim and Hub.The project will have the capacity to supply 2,000 megawatts with a 10 percent overload capability for two hours, the report said. The second one is the Rashakai Special Economic Zone project to promote industrialization through optimally priced, world-class industrial infrastructure in Khyber Pakhtunkhwa province.The project is designed and set to become "the key trade and logistics hub connecting Kashgar, Kabul and Gwadar on the Belt and Road, and be a high-end host of international commercial, technological and manufacturing hub," Urdu Piont reported.These projects could bring jobs and boost economic income for the ordinary people as well as living standards as more stable electric power is provided, Lin said. "Khan's government wants to make Pakistani people really feel the change and benefits brought from the China-proposed Belt and Road Initiative and the CPEC," he said.Rana Ali Qaisar, general secretary of the international department of the National Party of Pakistan, told the Global Times Monday that "the visit by Vice President Wang shows that China has never changed its support for its iron brother. The relationship and cooperation between the countries will not be affected by a political power transition within our country."Wang said on Monday that "I am confident the CPEC will add new impetus to development in Pakistan besides furthering regional development. I am happy to know that supporting CPEC is a consensus among all parties and ethnic groups across Pakistan," Pakistan Today reported.Education, technologyThe Confucius Institute at the University of Punjab was also launched at the ceremony. The institute mainly provides education of Chinese language, cultural promotion and cultural exchanges and other projects and activities.With the development of the CPEC, the demand for Chinese speakers in Pakistan will be increased and it is important for China to build more such institutes in Pakistan, Lin noted.Qaisar said that boosting educational cooperation between the two countries is always a hot topic proposed by Pakistani delegations who visited China and "Vice President Wang's ongoing visit has brought great progress in this aspect."The ceremony attended by Wang and Khan also marked the launch of the Huawei Technical Support Center to be established in Pakistan as part of Chinese tech giant's commitment to make a massive investment in Pakistan.The activities of Chinese firms in Pakistan will increase for sure and the use of Huawei equipment in Pakistan will also be increased, Lin noted. Establishing a technical support center shows that the two sides want to reinforce technological support for CPEC construction, he said.