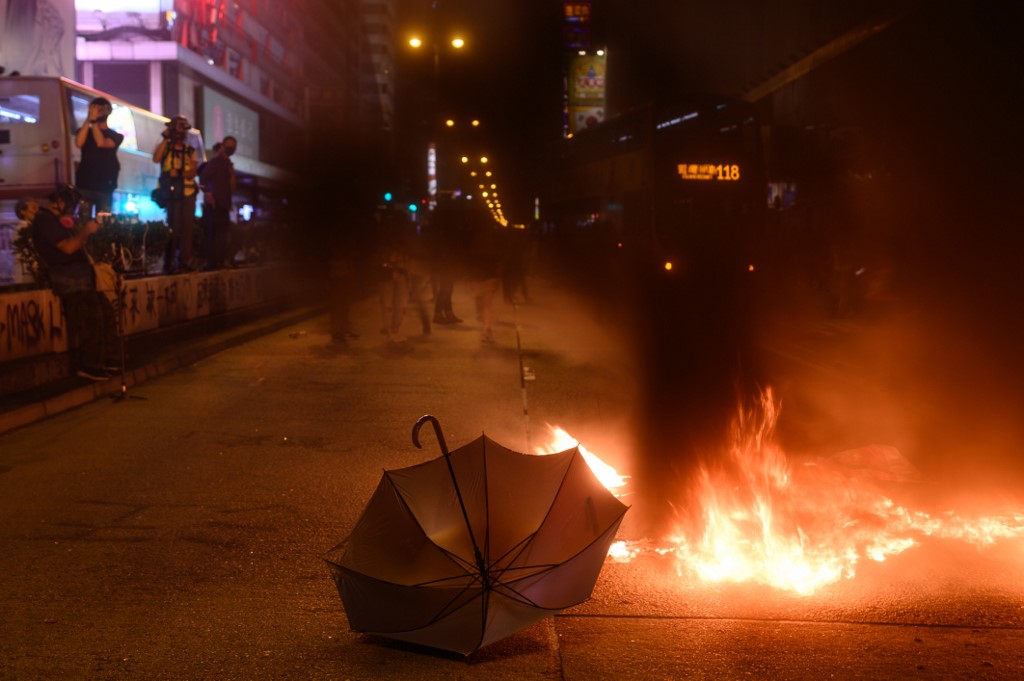 An umbrella is left on the road as protesters burn barricades in Mong Kok district of Hong Kong on November 2, 2019. (File photo: AFP)

Chan expressed his concerns in a blog post after concluding a visit to London earlier this week, during which he met government officials as well as people from business, finance and innovative technology sectors.

Chan said the prolonged violence, including vandalizing shops and public facilities, has taken its toll on both Hong Kong's economy and its reputation as a safe global commercial and financial center.

He cited repeated queries from the people he met during the London trip, who worried about when the unrest in Hong Kong would cease.

Many have canceled visits to Hong Kong or postponed investment plans over safety concerns, he said, adding that he faced similar concerns when he visited the United States last month.

However, Chan pointed out that overseas investors were still very interested in opportunities in Hong Kong and the Guangdong-Hong Kong-Macao Greater Bay Area.

As long as social security and order are restored, Hong Kong is still highly competitive especially as a bridge between the Chinese mainland and the international financial market, as well as a springboard leading foreign investment into the Greater Bay Area, he said.

The months-long unrest has already delivered a major blow to Hong Kong's economy, which contracted 2.9 percent year-on-year in the third quarter, marking the first decline in almost 10 years and a technical recession.

Chan said given the significantly weak economic performance in the third quarter, Hong Kong is highly likely to see a negative growth in the full year of 2019.

He particularly noted the 3.5 percent year-on-year decline in private consumption in last quarter, which accounts for over two-thirds of Hong Kong's GDP.

If private consumption continues to register sharp falls in future quarters, it will impose greater pressure on Hong Kong's employment, he warned.