CHINA Promises to open up seen as trustworthy

Promises to open up seen as trustworthy 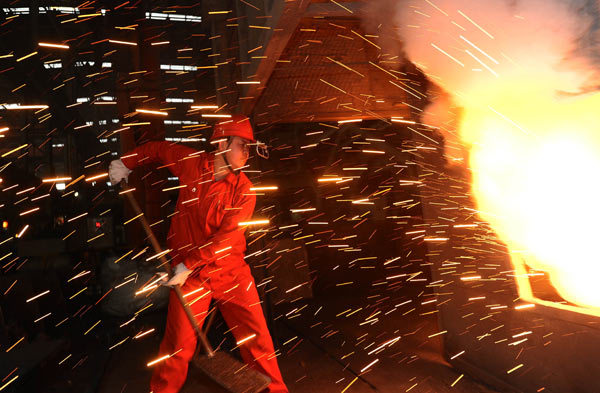 A worker at a steel plant in Dalian, Liaoning province. (Photo: agencies)

The world should have faith in China's commitment to further opening-up as the country, by delivering its 14th Five-Year Plan (2021-25) blueprint, is expected to map out more ambitious tasks in order to reinforce high-quality economic, technological and cultural engagement with the rest of the world, observers said.

They commented as the Fifth Plenary Session of the 19th Communist Party of China Central Committee opened on Monday.

Xi Jinping, general secretary of the CPC Central Committee, briefed participants about the draft proposals of the 19th CPC Central Committee on formulating the 14th Five-Year Plan for Economic and Social Development as well as targets for 2035－a top-level policy blueprint for China's mid－and long-term development.

Xi, who is also China's president, has on multiple occasions sent reassuring signals on the country's long-term view on expanding opening-up and has outlined fresh goals to meet in the near future.

Despite strong economic headwinds from the COVID-19 pandemic, China managed to reverse a GDP downturn, continued to host foreign trade-related events and made public many important policies to assist the entry of foreign buyers and investors in the vast market, home to 1.4 billion people.

Throughout the year, Xi vowed on many occasions, including at the United Nations General Assembly, that the country aims to foster a "new development paradigm" with the domestic market as the mainstay while domestic and international markets reinforce each other.

At a symposium with leading experts on economic and social studies on Aug 24, Xi said that work on such a new development paradigm is definitely not isolating the domestic market but seeking the benefits of domestic and international economic circulation based on openness.

China will produce even greater market opportunities for other countries and will serve as a remarkably attractive destination for global commodities and production resources as it engages even more closely with the global economy, Xi said.

Seeking greater opening-up is not only a visionary choice for China to maintain sustained growth amid huge market uncertainties but also a recipe for offsetting some difficult problems clouding global growth, experts said.

Zhang Yuyan, director of the Chinese Academy of Social Sciences' Institute of World Economics and Politics, said, "We should improve the level of opening-up in an all-around approach during the years implementing the 14th Five-Year Plan, and we should unswervingly push for navigating the economic globalization (process) through the current bumpy stage."

China is expected to encourage more countries to open up by seeking greater quality in its own opening-up, thus "pushing for and playing a leading role in reforming and perfecting the global governance system", he added.

Zhang said many people have been concerned about anti-globalization headwinds, and trade protectionism and unilateralism are on the rise on the global stage.

"However, the world economy has a high degree of interdependence ... and globalization is a must and a trend for various countries," he said.

Ding Yifan, a researcher of global economy at the Development Research Center of the State Council, said that as China heads into the 14th Five-Year Plan next year and the CPC marks its centenary, the performance of the Chinese economy in the near future will lay the foundation and set the tone for the hundred years to come.

"China has been bolstering its opening-up and we have seen the attractiveness of the Chinese market multiply. Enterprises from developed countries are bound to earn greater profits as the country highlights domestic circulation as the mainstay," Ding said.

With foreign investment in China having increased for six consecutive months this year, Foreign Ministry spokesman Zhao Lijian said that many foreign enterprises have increased their presence in China, which is regarded as a "safe haven" for transnational investment.

From January to September, the reinvestment of profits of foreign-invested enterprises denominated in US dollars increased by 25.5 percent year-on-year, he said.

"It shows that more and more international investors are optimistic about China's economic growth prospects and hope to share in the dividends of China's economic development. China will continue to open wider to the outside world, provide other countries with an enormous market and development opportunities, and contribute to world economic recovery and growth," Zhao said at a news briefing on Friday.

Wu Xiaoqiu, a senior economist and vice-president of Renmin University of China in Beijing, said that opening-up "will remain a key aspect" of the 14th Five-Year Plan and "remain a key source of policy dividends" as the country's economy has long benefited from becoming part of the international economic system.

This year has also seen a slew of heavyweight commerce and trade exhibitions in China, including the 2020 China International Fair for Trade in Services in Beijing in September as well as the regular Canton Fair－China Import and Export Fair in Guangzhou.

The events featured online displays, negotiations and transactions despite the limitations imposed by the pandemic.

The third China International Import Expo is scheduled to open in Shanghai in November.

Senior Chinese officials recently unveiled opening-up plans for the next five years or specific goals to be achieved in the next phase, highlighting policymakers' commitment to engaging with the world over the long term.

Vice-Premier Liu He said at the Financial Street Forum in Beijing on Wednesday that the country's financial departments will implement the proposals outlined in the 14th Five-Year Plan and promote a new round of development and reform and opening-up. China also will introduce more high-level international competitors, Liu said.

Yi Huiman, chairman of the China Securities Regulatory Commission, said at the same forum that China will promote the institutional opening-up of the capital market, and will study the gradual unification and simplification of pathways for foreign investors to participate in China's capital market.