China's Chargé D'affaires Office in Lithuania expounded Chinese government's solemn position on China-Lithuania relations in a press meeting on Wednesday, emphasizing that properly handling the Taiwan question is the precondition and key to the restoration of bilateral relations. 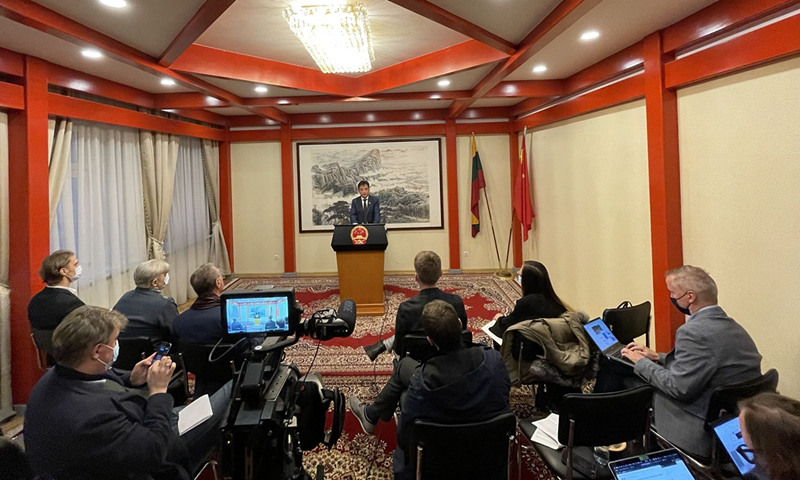 Qu emphasized that Lithuania will neither obtain the so-called sense of security nor meet its long-term and fundamental interests by falling foul with China, the permanent member of the UN Security Council and the second largest economy in the world. Instead, the Lithuanian government must bear all the ensuing consequences for its treachery and faithless act.

Qu expressed China's understanding and respect for Lithuanians' love of independence, freedom and democracy, which Chinese people also pursue. However, Lithuania has lost diplomatic independence by choosing sides and following orders of a certain country. The so-called "values-oriented diplomacy" it promotes is hypocritical.

"For example, some Lithuanian lawmakers coupled 'human rights' to the Winter Olympics and incited a boycott of the Beijing Winter Olympics. However, they kept silent on Lithuania's rough treatment of refugees at the Belarusian border, on the discrimination of those that belong to the domestic Russian race and Polish ethnicity and on the independence movement of Catalan in Spain."

China has downgraded its diplomatic relations with Lithuania to the chargé d'affaires level for its brutal betrayal of the One-China Principle, which is the political foundation for an ambassadorial-level diplomatic relationship between the two countries.

Qu also sternly warned the Taiwan authorities that collusion with foreign forces and stated that political manipulation is doomed to fail. History cannot be changed that the mainland and the island belong to one China despite secessionists trying to misrepresent facts.