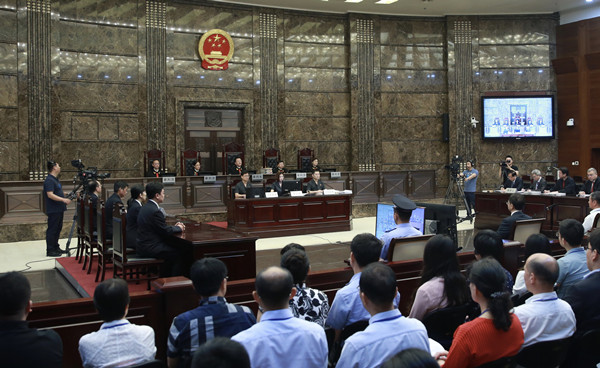 Zhang Wenzhong, founder and former chairman of Wumei Holdings, is pronounced not guilty at the Supreme People's Court on Thursday, reversing a decade-old verdict. XU LIXIN/XINHUA

Chinese retail tycoon Zhang Wenzhong has experienced many turning points in his life, but none compare with the moment when he heard the country's top court pronounce him "innocent" on Thursday.

As the founder and former chairman of Wumei Holdings, the parent of retail chain Wumart Stores, Zhang had been hoping for the moment for more than a decade after being sentenced to prison for 18 years for fraud, embezzlement and corporate bribery in 2008.

However, on Thursday, the Supreme People's Court－after a final retrial－made the ruling that the original sentence was based on insufficient evidence and the laws applied were improper.

"When I heard the word 'innocent', I was trying hard to hold my tears," Zhang said. "After going through all these difficulties, I finally got such a result."

Zhang, 55, has been the first high-profile entrepreneur in the country whose name was cleared in such controversial property-related cases. Experts said the acquittal reflects ongoing efforts by the Communist Party of China and judicial authorities to better protect the legitimate rights of businessmen, particularly their property rights.

"It's the central leadership's determination and concrete measures that helped clear my name," Zhang said.

"The ruling is not only about me, but all entrepreneurs and entrepreneurship," he said. "I believe my case is a new beginning to rectify similar property-rights disputes involving private companies, and the correction will inject a new driving force into the development of private enterprises in China," Zhang said.

The correction has also been regarded by law professionals as an example of how the country is implementing its increasing focus on the rule of law.

Chen Weidong, a law professor at Renmin University of China, said some controversial court rulings in such cases reflected the historical limitations on how to view and handle private enterprises in China at that time. Judicial authorities' misunderstanding and wrongful application of laws should also be blamed.

Zhou Guangquan, a law professor at Tsinghua University, said the case provides a standard on how to try property-rights-related cases for grassroots courts.

The case began to unfold in 2006, a year of both glory and a deep abyss for Zhang, a scholarly retailer. But his story first really got going years earlier, when, as a post-doctoral graduate from Stanford University School of Engineering, Zhang returned from the United States to China and set up his computing company in 1992, encouraged by China's reform and opening-up policies.

In 1994 Zhang established the first Wumart store in Beijing, which initially was designed to showcase the information-management system and point-of-sale devices he developed for Chinese retailers. The supermarket quickly drew the attention of millions of Beijing residents and reached revenue of 100 million yuan in the first year. In 2004, Wumart took up about one-third of Beijing's retail market.

In November 2003, Wumart was listed on the Hong Kong Stock Exchange, and quickly expanded its retail empire through acquisitions and mergers of local retailers, including Merry Mart and Ningxia Xinhua Department Store. The information system developed by Zhang also received top awards by the China General Chamber of Commerce.

However, at the peak of Wumart's expansion in 2006, his days of glory, Zhang was probed by the country's top disciplinary watchdog in a case related to then vice-mayor of Beijing Liu Zhihua. Later that year, as he began to fall into the abyss, Zhang resigned from Wumei. Liu received a suspended death sentence in 2008 for taking about 7 million yuan in bribes.

Also in 2008, Zhang was sentenced to 18 years by the Hengshui Intermediate People's Court in Hebei province, but for crimes unrelated to Liu's case.

The verdict said Zhang was guilty of defrauding 31.9 million yuan from a national subsidy, the most severe crime of the three charges against him. The court said although Zhang knew that private enterprises were not eligible to apply for the subsidy, which was mainly granted to State-owned companies, he still faked materials to get the money.

The other two charges were about Wumei's bribing senior executives of other two companies in order to facilitate the acquisition of Taikang Life Insurance Co Ltd, and Zhang's misappropriating tens of millions of yuan of company money for personal investments in the stock market. Though he later returned the money, illegal gains were kept, the court ruled.

Zhang was also given a fine of 500,000 yuan. The hearing, which lasted 16 hours, was not open to public, according to media reports at the time.

After the first sentencing, Zhang started his decadelong appeal. In March 2009, the Hebei Provincial High People's Court upheld the conviction, but cut the jail term to 12 years.

"The law application of the ruling was seriously wrong," Zhang's lawyer Zhao Bingzhi has repeatedly argued. He said the national subsidy never banned private enterprises, and no one told his client he could not apply for the subsidy.

On Thursday, the top court accepted Zhao's argument and said the other two charges could not stand due to insufficient evidence and the incorrect application of law.

However, the loss is immense to both Zhang and Wumei. With the absence of its founder and soul leader, the company has missed the most dynamic and fast changing era for retailers in the country. Its business has remained stagnant for years and it exited from the Hong Kong Stock Exchange in 2015.

Different from many aggressive businessmen, Zhang is soft-speaking and elegant. No matter for an interview or to stand trial, he always wore suits and had good manners.

Zhang was released in 2013 after getting commutations twice in prison. Even during the years behind the bars, he did not stop from reading and researching. "Reading is what helps me survive the most miserable and helpless moments," said Zhang, who talked to China Daily in an exclusive interview last week.

Mostly, he read English-language books and said his English has improved greatly. He was able to obtain four patents in terms of technology development during his imprisonment.

The prison life did not change Zhang's hardworking mode. He is still strict with himself and calm when handling business.

"He is a man of actions," said a man close to him. "He won't wait for the next day to solve issues."

Having asked what he thinks of the lost years, Zhang said: "One should not live in the past but in the future, with rational pursuit and expectations."

He also expressed gratitude to his entrepreneur friends who constantly visited him in prison and appealed on his behalf.

When Zhang gave a public speech at the China Entrepreneur Forum earlier this year for the first time since his imprisonment, almost all executives and entrepreneurs stood up and applauded, including Jack Ma, founder of Alibaba Group.

"I'm honest with my heart and could face the test of history. I have no regret or hatred," Zhang said in the speech. "But I require to thoroughly rectify my wrongful case, and my name should be completely cleared."

Yan Maokun, head of the top court's research office, said the correction of Zhang's case showed the central leadership's determination to protect rights of entrepreneurs and their properties.

It also reflected the country's equal protection in a diversified ownership economy, as well as its encouragement of the private economy, the highlight of the rule of law and the respect to human rights, he said.

"Justice is sometimes late, but will never be absent," Yan said.

"Correcting miscarriages in Zhang's case is also to remove improper regulations on the nonpublic economy, eliminate barriers for its developments, ensure fair competition in the market, create a sound business environment and inject dynamism into private enterprises."

Property protection has been effectively strengthened since the 18th National Congress of the Communist Party of China in late 2012. In 2016, the CPC Central Committee and the State Council issued a guideline on better protection of property rights in an effort to shore up social confidence and promote social justice.

The guideline requires governments at all levels to insist on the equal, comprehensive and legal protection of property rights and also stipulates the nonpublic economy cannot be violated.

In 2016, the nation's top court also urged all courts to urgently review property-rights-related disputes dating to 1978 and to pay attention to the court rulings in which private enterprises were found to engage in misconduct.

A document released after the annual Central Economic Work Conference, on Dec 20, which set the tone for China's economic policies this year, also asked for the review and for courts to rectify some controversial property rights disputes that have raised social tensions.

A week later, the top court announced the retrial of three major cases linked to property rights, including Zhang's case. The other two are related to Gu Chujun, former chairman of Guangdong Kelon Electrical Holdings Co, and an equity transfer dispute.

Chen from Renmin University, who has been following Zhang's case closely, said the retailer's new innocent verdict "is the best implementation of the central leadership's requirements to increase efforts to protect properties and rights of entrepreneurs".

The case is also an example for grassroots courts, "showing how to hear such a case in regulated ways", he said.

Private enterprise contributes much to the economy in taxes and commerce, "but we have to admit we failed to realize or even look down on its value and significance in the past," Chen said.

Zhou Guangquan, the law professor from Tsinghua University, said Zhang's case should also point to the misunderstanding of laws, because "judges at that time might not have distinguished economic disputes from economic crimes".

He said such a wrongful application of laws in hearing property-rights-related cases may not be rare in courts in the past due to a lack of judicial experience.

"To avoid such wrongful convictions, courts must overcome interference from local governments and improve the accuracy of law applications," he said. "We cannot make new wrongful judgments while overturning convictions wrongly made in the past."

While the country is moving forward to better protect the property right of businesspeople, Zhang also is looking forward－for himself and for Wumei.

Technology has always been a driver for Zhang's business. "I could have become a programmer and got involved with e-commerce," Zhang said jokingly. "I was in retail by chance."

Humble and cautious about Wumart's expansion plans, he is still a fighter in the industry. Earlier this year, Wumart acquired 21 Lotte Mart stores in Beijing from the Republic of Korea's Lotte Shopping for about 248.5 billion won ($230.2 million). Wumart now has more than 1,000 stores in North, East and Northwest China, and the retail giant has earned revenue of more than 50 billion yuan as it continues to march into northeastern and southern regions.

"For me, my mission is to continuously improve digital retailing, upgrade the unification of online-and-offline experiences, provide safe and fresh food for society and provide a better income for Wumart's employees," Zhang said. "Persistence matters," he added. "Plus a positive attitude and belief in justice."