CHINA Protecting Qinghai's snow leopards with the help of their droppings

Protecting Qinghai's snow leopards with the help of their droppings 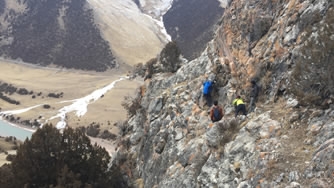 In “Protectors of the Plateau,” Rediscovering China investigates the challenges facing the people responsible for animal protection efforts in one of the most inhospitable parts of northwest China.

China is home to more than half of the world’s snow leopard population. Their home range is the Tibetan plateau – particularly the Sanjiangyuan area, which has the most extensive connected snow leopard territory in the world. With 24 snow leopards roaming its vicinity, the town of Angsai in Qinghai’s Zaduo county has more of the animals than anywhere else in the world. In Yunta, an area that has recently gained fame after featuring in the Disney wildlife documentary, “Born in China,” nine snow leopards were discovered in 2012. Now, in 2017, there are 12.

Protector of the Plateau – Cheng Chen

One of the people trying to ensure that this positive trend continues is Cheng Chen, a researcher working for the Shanshui Conservation Center – an environmental protection NGO based in Beijing.

She divides her time between the highlands of Qinghai, where she scours the mountains for traces of the leopards at heights of up to 5000 meters, and in Beijing, where she analyses fecal samples in a modern laboratory.

When the NGO initially started working in Qinghai, they had no data on the snow leopard population. All their knowledge was gained from talking to the local farmers. However, their observations need to be verified, and this is where Cheng Chen comes in.

The farmers help narrow down the location of snow leopards by relaying any sightings, and then Cheng Chen searches the mountains for evidence of leopard activity, such as paw prints, pits dug with their hind legs or the smell of urine where they have marked their territory. However, the most important item on the list for her is their droppings. These, she collects and takes back to her Beijing laboratory for DNA sampling.

“They have information on the snow leopard’s diet and the animal itself,” Cheng says. “First, we conduct species identification, and then through DNA analysis, we can determine what animals it mainly eats. Then we know which animals in the area are important to the snow leopard.”

Aside from providing an understanding of what’s been on the predators’ menu, the DNA samples reveal which individual animal left its business in the area, so its home range can be identified. On a larger scale, the analysis can also provide an insight into how genetically diverse the population is. With so few snow leopards left in the world, the risk of inbreeding is high. This, in turn, presents a danger to their long-term chances of survival.

While snow leopard numbers may be growing, Cheng Chen is keen to point out that a lot of protection work still needs to be done. She’s concerned that the prevalence of video footage featuring snow leopards, including projects such as Disney’s “Born in China,” might give the impression that snow leopard sightings are quite common.

“There’s one thing we always want to clarify – that snow leopards are still very rarely spotted,” she says. “The thousands of pictures that you can find online, they could be the same snow leopard. If it wasn’t for equipment like infrared cameras or other kinds of tech help, you’d rarely see even one of them. Do not get the impression that there are a lot of snow leopards, just because of the numerous pictures. The number of snow leopards is still very low, and they need to be protected.”