Protection has antelope numbers leaping ahead 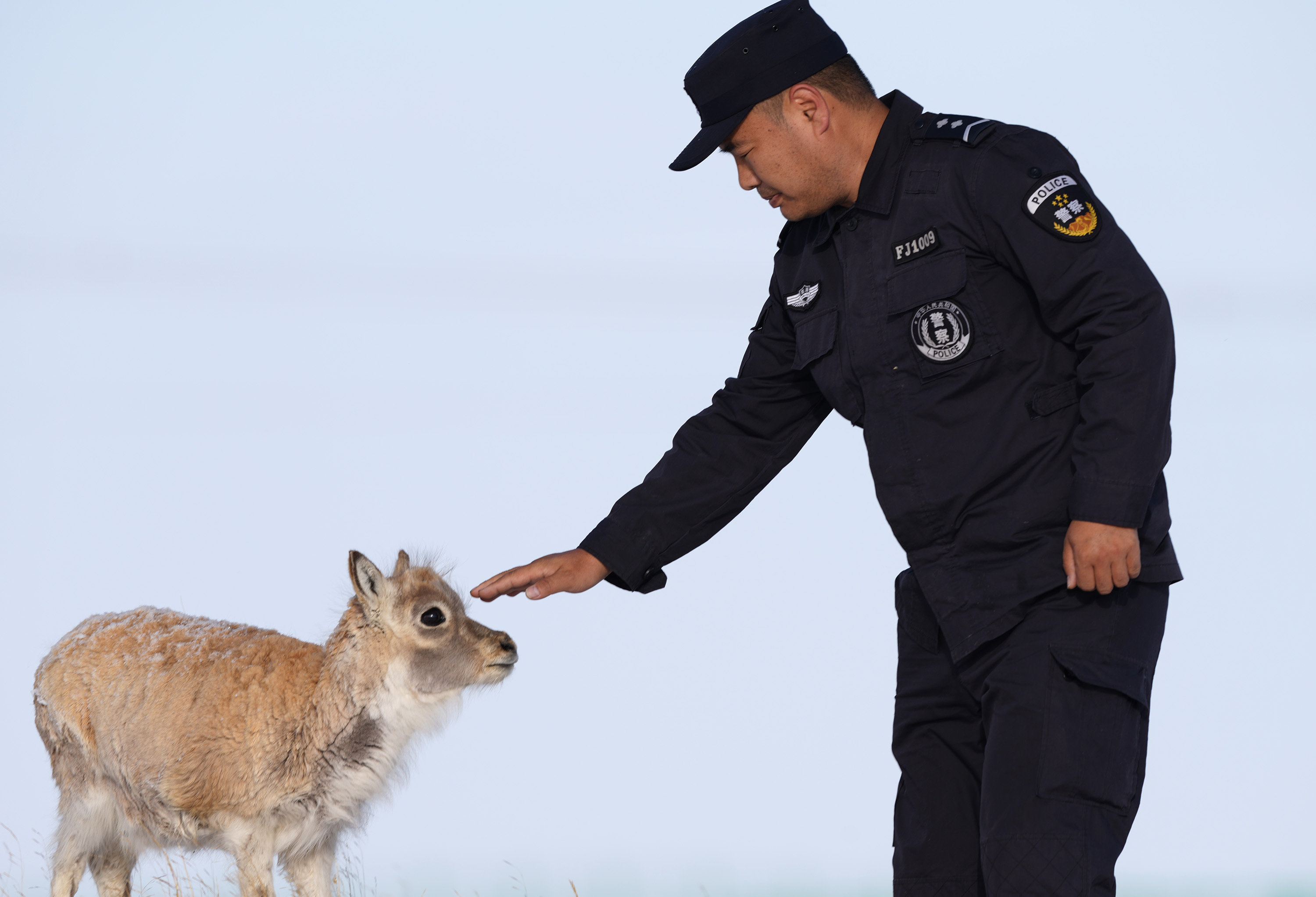 Yuan Guangming tends to a Tibetan antelope in the Hoh Xil National Nature Reserve in northwest China's Qinghai province on April 20. For more than a decade, Yuan has dedicated himself to the protection of Tibetan antelopes and other wild animals in the nature reserve. (Photo: Xinhua)

No pregnant woman would hike 400 kilometers on foot through remote areas of western China just to have her baby. That's why humans have hospitals.

But that's what female Tibetan antelopes do. And after they have had their calves, they turn around and go back to where they started, an 800 km round trip, admittedly on four legs rather than two, but it's still a daunting distance.

Tens of thousands of pregnant Tibetan antelopes are now making their way across the high grasslands of the Tibet autonomous region, with some of them greeting old friends who started the journey earlier and are on their way back with their surviving calves. Most newborns die in the harsh conditions.

Every year starting from early May, the animals begin their long trek, impelled by Mother Nature, after mating in November or December. They make the return trip around August.

Wu Xiaomin, an expert from the Shaanxi Institute of Zoology, said the population of the once-endangered species has increased dramatically in the last few decades thanks to enhanced protection efforts, including more aggressive enforcement of anti-poaching laws and measures to improve the animals' habitat.

The antelope are a first-class protected species in China, but they are making good progress in increasing their numbers. The population of the species has grown from 60,000 or 70,000 in the early 1990s to around 300,000 now.

"Every year, starting from around May, all the female antelopes, including 2-year-olds, take part in the migration," said Wu, who also works for the Northwest Institute of Endangered Zoological Species.

Wu said the habitat for the Tibetan antelope in China covers more than 1 million square kilometers, mostly in remote, severe environments with altitudes between 3,700 meters and 5,500 meters.

"Because of climate change, the migration time of the antelopes during which they give birth is coming a few days earlier, and their longest migratory route could reach 800 km if measured in a straight line," Wu said.

More than 90 percent of the female animals give birth every year, but only about 30 percent of the newborns survive. Many of the calves die on the journey, unable to hold up under the extreme conditions, which include predators and disease.

From a survey trip he took to observe the migration in July last year, he happened to observe a herd of more than 60,000 migrating antelopes at close range in Rongma township in Tibet's Nyima county.

"I was shocked to see such a big herd," he said. "I felt what turned out to be a magnitude 6.6 earthquake early in the morning, but I had a pleasant time for the rest of that day."

Thanks to the government's protection efforts, patrol stations are abundant. However, there is a slight problem of conflict between nomads and wildlife in Tibet, he said.

"The nomads put fences on the grassland to protect the grass and distinguish their own share of grassland, but sometimes these hinder the normal activity of the Tibetan antelopes," he said, adding that passageways must be cut through the fences to let the animals through.

"The government of the Tibet autonomous region has taken action in recent years to give more protected space to wildlife by relocating nomads from places at altitudes above 4,800 meters to other places in the region," he said.

"Relocation of nomadic families from extremely high altitudes is a smart measure, and we also need to have more high-tech facilities to carry out surveys and protection work in the reserves."

According to a staff member at the Nagchu bureau of forestry and grassland, the city has been working to provide a better habitat for many rare wildlife species, including the Tibetan antelope. The city's ecological protection measures include operating 73 management stations. In addition, it employs 780 professional patrol officers who have worked year-round for the safety of wildlife since 2015.

Around the habitat of the Tibetan antelope in the Serling Tso National Park in Shanza and Palgon counties, 64 full-time staff members guard the passageways, resting areas and birthing places.