Since June, Hong Kong's opposition and some radical forces have used the pretext of peaceful demonstration to engage in protests that have sometimes become violent. 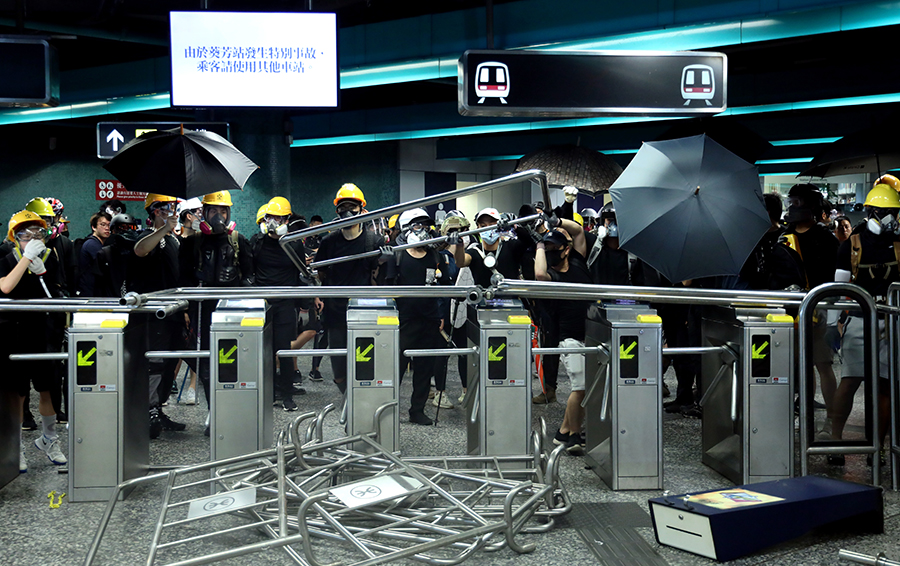 Protesters use steels barricades to form a defensive line inside the Quarry Bay MTR station, Hong Kong, as they face off with riot police on Aug 11. (Photos: China Daily)

Though the Hong Kong Special Administrative Region government has said on many occasions that it has completely halted the amendment of two ordinances concerning the transfer of fugitives, protesters continued to escalate violence and cause mayhem in the city.

Here is a timeline of the activities that challenge the rule of law, disrupt social order, and undermine national sovereignty and the "one country, two systems" principle.

· On June 9, demonstrators started to protest against the proposed amendments. In the small hours of June 10, well-organized protesters started attacking the LegCo building, blocking roads and assaulting police officers. They clashed with police, with some attempting to rob officers of their guns. Eight policemen were injured.

· On June 12, an illegal rally started around Admiralty, and some radical members stayed around the LegCo building until midnight. Well-organized protesters assaulted officers with bricks, homemade spears and even petrol bombs, injuring 22 police officers. Though police exercised restraint, the protesters continually assaulted their lines and forced police to use appropriate force to disperse demonstrators.

· On June 21, even after the HKSAR government announced that it had halted the amendments, violence continued. Extremist protesters surrounded police headquarters and wreaked havoc, and blocked the public from using services at Revenue Tower and Immigration Tower. Then they blocked Hong Kong government offices and the High Court.

· On June 26, some people instigated demonstrators to storm police headquarters for the second time. They repeated similar savage behaviors. Opposition lawmakers were once again present to provide support. The personal details of some police officers were illegally leaked online.

· On July 1, rioters blocked roads and threw corrosive liquids at police officers. They ransacked the LegCo building and assailed police with toxic chemical powder. They extensively damaged the council chamber, defaced the HKSAR regional emblem, tore up the Basic Law, waved a colonial-era flag and even called for the establishment of a so-called interim government. 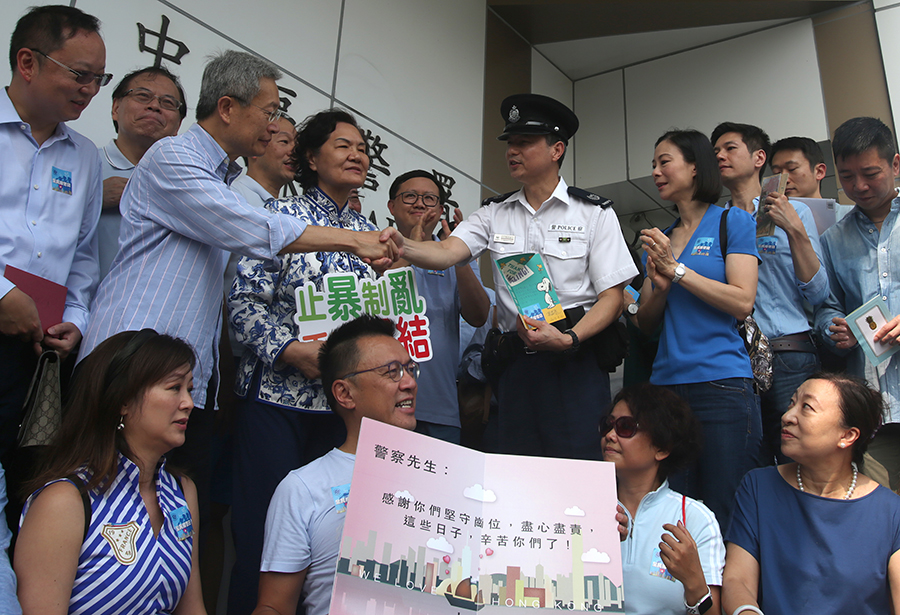 A group of citizens show support for the Hong Kong Police outside the Central Police District Headquarters on Aug 10.

· On July 6, disputes broke out in Tuen Mun district between protesters and residents. Residents were besieged, beaten and kicked by radicals. Protesters occupied roads and besieged Tuen Mun police station.

· On July 7, protesters organized another demonstration in Kowloon, leading to a 50 percent plunge in passengers through the West Kowloon high-speed train station, compared with an average weekend. Only 31,000 passengers traveled through the station on that day. After the demonstration, some radical protesters illegally blocked roads in Tsim Sha Tsui, forcing most shops to close early.

· On July 13, a demonstration in Sheung Shui district ended with violent clashes with the police. A few radical protesters blocked main roads, beat and attacked police officers with umbrellas, iron bars, suspected toxic powders and corrosive liquids. At least 16 police officers were injured. At night, the protesters continued to sabotage stores in the district. The police then launched a clearance operation in accordance with the law.

· On July 14, some protesters removed a roadside fence in Sha Tin district to block roads, sharpened bamboo branches as weapons, and hurled bricks, umbrellas and other debris at police officers from high buildings. Fierce clashes broke out at New Town Plaza, injuring at least 10 police officers. An officer in plain clothes was attacked by a mob. Some officers were left with facial fractures. One police officer's finger was bitten off.

· On July 27, though the Hong Kong police had issued a notice of objection, some people assembled illegally in Yuen Long district. A group of radical protesters illegally cut off traffic, besieged police vehicles, smashed car windows and smeared cars with insulting words. Police officers were deployed at the village entrance to prevent conflict between protesters and villagers. Several radical protesters also besieged the Yuen Long police station, forcing the report room to suspend service. Opposition lawmakers were once again present to support the violent acts.

· On July 28, a number of radical protesters carried out illegal demonstrations in the central and western parts of Hong Kong Island, seriously hindering traffic. They dug up sidewalk slabs, destroyed street signs and lampposts, set fires on multiple roads and charged police lines. Violence escalated, as some people carried weapons such as bows and arrows and petrol bombs. 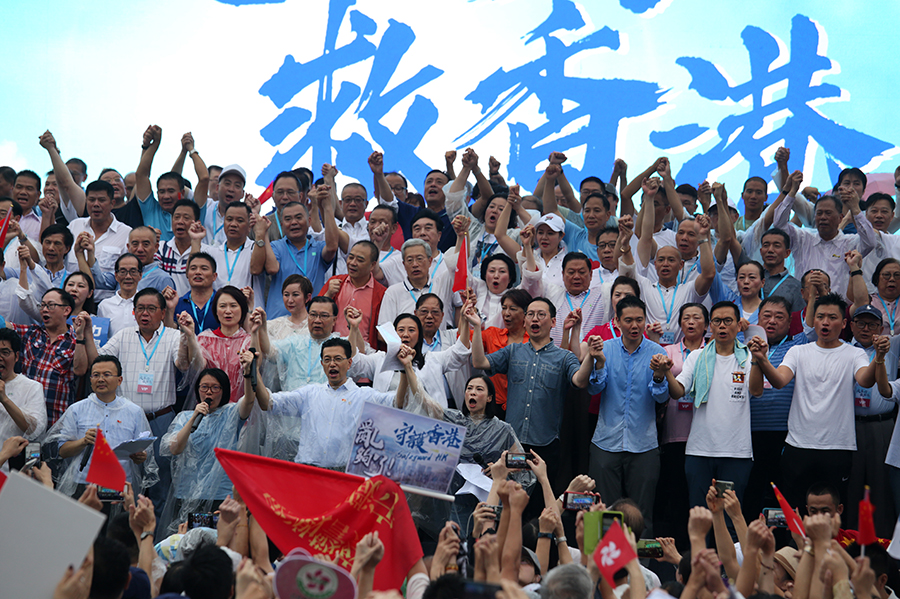 More than 476,000 people attend an event in support of the Hong Kong Police at Tamar Park on Aug 17.

A group of protesters attacked the offices of the Central Government in Hong Kong, insulted the national emblem and flag, and undermined national sovereignty and dignity and the "one country, two systems" principle.

· On July 21, radical protesters besieged and attacked the Liaison Office of the Central People's Government, defaced the national emblem in front of the building by hurling eggs and black paintballs, damaged security facilities and scrawled graffiti insulting the nation.

They even spoke about forming an "interim legislature" in a statement read out at the scene.

· On July 26, police arrested a suspect on suspicion of desecrating the national emblem.

· On July 28 and Aug 4, protesters mounted more attacks at the liaison office, but riot police stopped them

· On Aug 3 and on Aug 5, black-clad, masked protesters twice ripped the national flag off the pole in Tsim Sha Tsui and flung it into the sea, in clear defiance of national sovereignty. 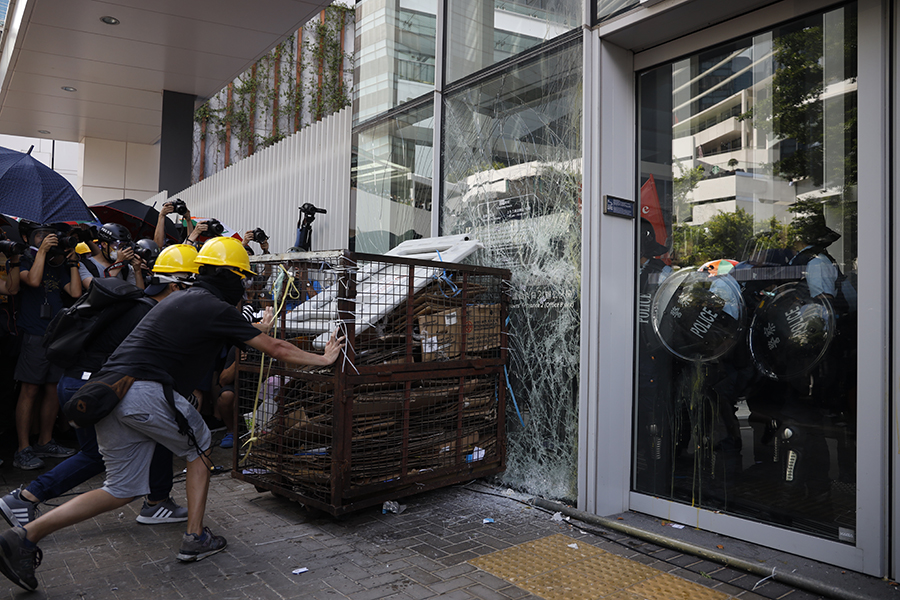 Protesters try to ram a trolley laden with flattened cardboard boxes through the glass-fronted entrance of the Legislative Council complex in Admiralty on July 1.

Pushed to the brink

· On Aug 5, flash mobs stirred up trouble across Hong Kong. They destroyed public facilities, including roadside railings, sidewalk slabs, traffic bollards and lights. As a result, 36 roads and the Cross-Harbor Tunnel were blocked, 96 buses were suspended or rerouted, eight MTR lines were obstructed and more than 200 flights canceled.

From the night of Aug 5 to the early hours of the following day, some radical protesters raided at least 10 police stations. They scribbled words to insult police, hurled petrol bombs and firebombs at police stations and officers, shot vision-harming lasers, ruined police cars, and caused mayhem on several streets, and at police stations and buildings. They also cut off power lines.

· On Aug 11, protesters threw petrol bombs and wounded at least one policeman.

· On the evening of Aug 13 and early on Aug 14, violent acts occurred at Hong Kong International Airport. Some radicals attending an unlawful assembly at the airport inflicted severe physical harm on two residents of the Chinese mainland.

Around 8 pm on Aug 13, they unlawfully detained a resident from Shenzhen, Guangdong province, surnamed Xu, who held a Hong Kong and Macao travel permit for private visit purposes and was at the airport to see people off. They tied him up, shot a laser at his eyes and beat him unconscious.

They also obstructed the way for an ambulance crew to take him to hospital. With the help of the police, it took nearly four hours for Xu to be rescued. As the events played out, they also besieged and assaulted a police officer and snatched his baton.

After midnight on Aug 14, some protesters tied both hands of a Global Times reporter surnamed Fu and beat him, suspecting him to be a fake reporter, causing multiple injuries.

The protesters have become better equipped, coordinated and planned, and they have continued to push the level of violence to new heights. Many weapon caches containing explosives, firebombs and knives suspected to be owned by radical protesters have been uncovered in police operations.

From June 9 to Aug 6, the Hong Kong police arrested 589 people suspected of illegal assembly, rioting and assaulting the police.

What is more alarming is that anti-China forces in the West have colluded with local anti-China forces who intend to mess up Hong Kong. On multiple occasions, foreign nationals were seen meeting and talking with radical protesters. Recently, leaders of "Hong Kong independence" groups secretly met with officials of the United States Consulate General in Hong Kong. The day after their meeting, the groups said on social media that they plan to boycott classes in September.

It is incontrovertibly evident and without question that the Hong Kong opposition camp and radical groups have colluded with foreign forces. Certain forces in the US and Britain have deliberately ignored extreme violence in the illegal protests and attempted to portray mobsters as campaigners for "freedom, democracy and human rights".

During the recent riots, the Hong Kong Police Force has honored its duties and enforced the law with professionalism and great restraint. The police have been a pillar in safeguarding Hong Kong's social security and the last shield to uphold its social stability. It has maintained its reputation as one of the world's most outstanding police forces. From June 9 to Aug 5, 139 officers were injured on duty. 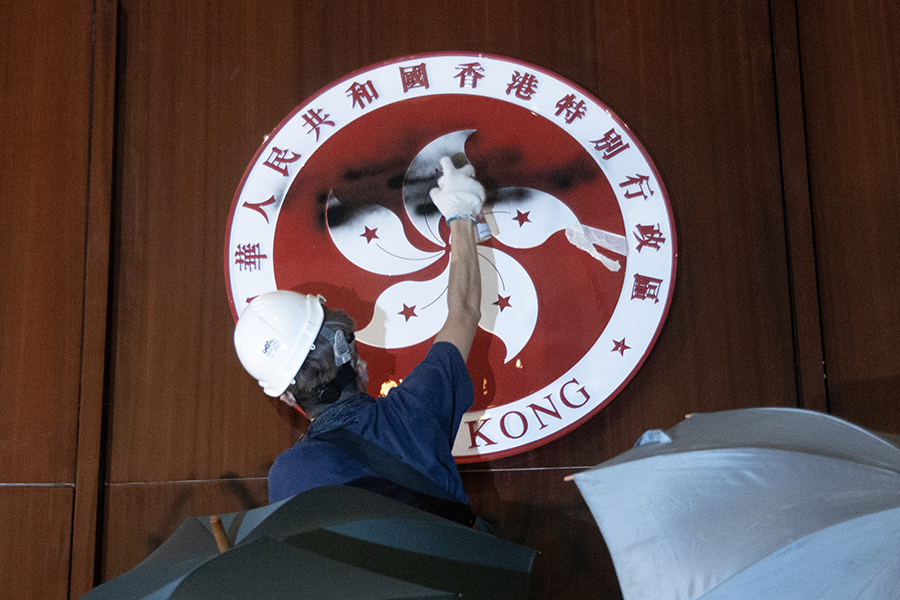 A protester sprays paint over the city emblem in the complex.

Looking back at the past two months, the ordinance amendment issues have changed in their essence and now bear the features of a "color revolution".

Should violence and chaos be allowed to continue, the safety of Hong Kong citizens' lives and property will be endangered, and the governance authority of the SAR government, the cornerstone of the rule of law in Hong Kong, its prosperity and stability and the "one country, two systems" principle will be destroyed. Citizens of Hong Kong will not allow this to happen. The people of China will not allow this to happen.

On Aug 7, the Hong Kong and Macao Affairs Office of the State Council and the Liaison Office of the Central People's Government in Hong Kong jointly held a symposium in Shenzhen to brief the attendees on the central authorities' policies on stabilizing Hong Kong's situation.

It stressed that the most pressing and overriding task in Hong Kong is to stop the violence, end the chaos and restore order.

The recent violence in Hong Kong is intolerable in any civilized, rational society under the rule of law. Any illegal and criminal acts that blatantly defy the basic principle of "one country, two systems", trample the rule of law, destroy social stability and infringe public interests will be brought to justice.