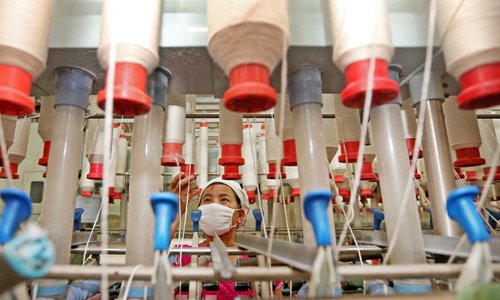 A worker in a textile company in Huaibei, East China's Anhui Province in October 2017 Photo: IC

Of the 27 provinces that have released their third-quarter GDP data so far, 22 reported growth higher than China's overall GDP level in the first three quarters. Experts said China's economic growth will remain stable, maybe with a slight fall in 2018, but growth of above 6.5 percent can be expected."Overall, China's economic situation has shown clear improvement this year, especially in terms of structural changes," Cong Yi, a professor at Tianjin University of Finance and Economics, told the Global Times on Thursday.  Of the 22 aforementioned provinces, Southwest China's Guizhou Province and the Tibet Autonomous Region both had GDP growth of 10.1 percent in the first three quarters, the highest growth level so far, the Beijing News reported on Thursday. They were followed by Chongqing Municipality, also in Southwest China, which had GDP growth of 10 percent in the first three quarters. Liu Dongliang, a senior analyst at China Merchants Bank, told the Global Times on Thursday that different provinces in Southwest China have different economic highlights, with Guizhou doing well in the Internet industry and Chongqing having strong fixed-assets investment. China's overall GDP growth reached 6.9 percent in the first three quarters this year, according to data released by the National Bureau of Statistics (NBS) on October 20. Better signs in Northeast ChinaAccording to the third-quarter GDP data released so far, there has also been an improvement in Northeast China, which has been burdened with strong downward pressure in recent years. For example, Northeast China's Liaoning saw GDP growth of 2.5 percent in the first three quarters this year, up from 2.1 percent growth in the first six months. The province's GDP slumped by 2.5 percent in 2016. The other two provinces in Northeast China, Heilongjiang and Jilin, have not yet disclosed their third-quarter GDP growth. Liu said that Northeast China's economic rebound comes along with a revival in  upstream industries and a price rise for many raw materials like steel and coal. "But the key economic problems in the area, such as imbalanced industrial structure and low efficiency, will not be solved in a short period of time," he noted. Cong said that Northeast China's economy is highly dependent upon heavy industry, but it has been rather slow in upgrading in this area, so when industry performs poorly, so does the area's economy. "I think the [Northeast China] region needs to find a new engine for its economic growth," Cong told the Global Times. Economy to remain stable The provincial GDP data released so far also demonstrated a slight economic slowdown recently, as nearly two-thirds of provinces saw their GDP growth fall in the first three quarters compared with the first half.But both Liu and Cong said this was a normal economic fluctuation. "Growth in the real estate sector has slowed as the effects of government regulatory policies have gradually manifested themselves. The infrastructure sector has slowed as local government financing dwindled due to policy restrictions," Liu said, forecasting that GDP growth is still likely to reach 6.8 percent in 2017. "Next year, the economic slowdown will continue, but there won't be a very sharp decline," Liu noted. He predicted that GDP growth is likely to be around 6.7 percent for 2018. Cong also said that China's economy will remain stable. "GDP growth of above 6.5 percent is very likely to become the normal state in the long term," he said, adding that domestic demand will become a strong pillar for China's economy in future.