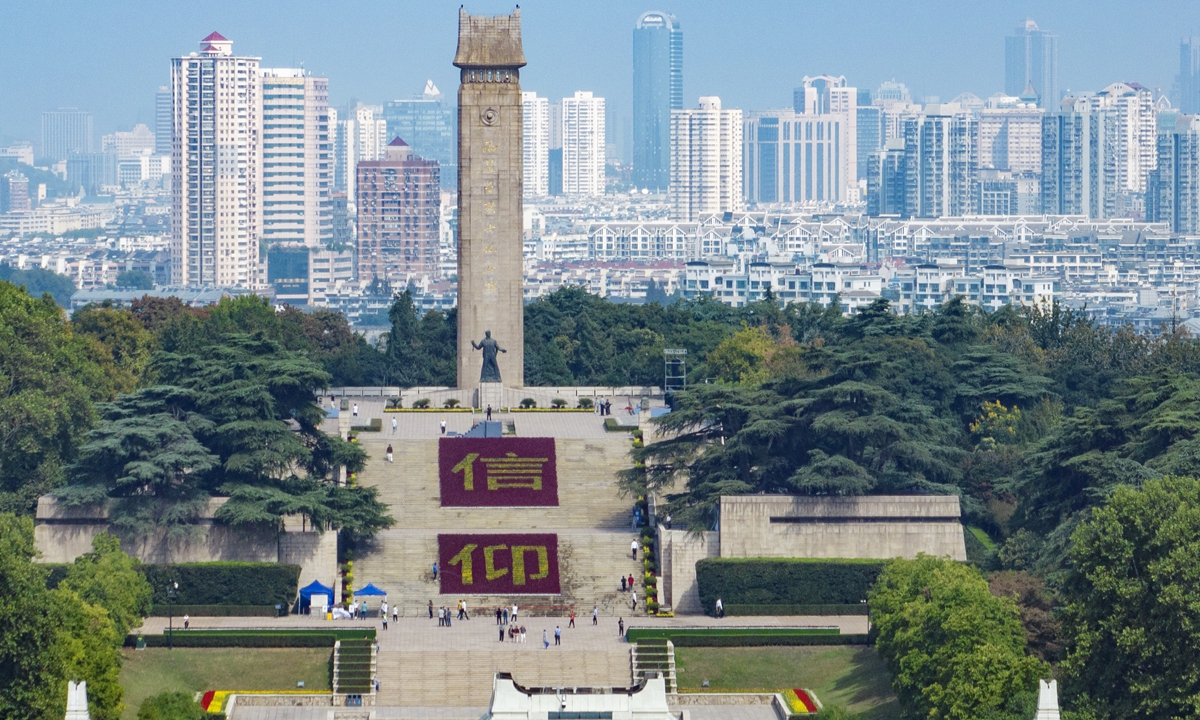 Tens of thousands of pots of flowers form the word "faith" on the steps in front of the Yuhuatai Revolutionary Martyrs Monument in Nanjing, East China's Jiangsu Province on September 29, 2022, in memory of the revolutionary martyrs ahead of Martyrs' Day. (Photo: VCG)

Ahead of China's ninth Martyrs' Day which falls on Friday, a day reminding the Chinese people to always remember the contributions made by the martyrs before they celebrate the National Day on October 1, the public have sent condolences and thoughts to the martyrs while the spokesperson for the country's defense authorities vowed to carry forward the martyrs' spirit.

Soldiers who had previously fought with the martyrs also came to pay tribute to them at the Martyrs' Cemetery in Kangxiwar in Northwest China's Xinjiang Uygur Autonomous Region. The soldiers brought snacks that the martyrs loved to eat in their lifetime and photos of their families.

"I still often think of the moments when I fought alongside you," said a comrade of martyr Xiao Siyuan in front of Xiao's grave.

Xiao is among the four heroes sacrificed their lives during the Galwan Valley border clash with India in 2020.

In many cities across China, young students have been gathering at the martyrs' cemeteries to send their condolences and wishes. While various forms of martyr commemorations are being held nationwide, the public are also expressing respect and condolences through the internet.

Many netizens left messages on China's Twitter-like platform Sina Weibo paying tribute to the martyrs. "The people's heroes will be immortalized forever," many of them wrote.

The spokesperson of the Ministry of National Defense also expressed the People's Liberation Army's (PLA) condolences and wishes to carry forward the martyrs' spirit, ahead of Martyrs' Day.

"In order to fight for national independence and people's freedom and happiness, and for the prosperity and strength of the country, countless martyrs have sacrificed their lives, and their merits are well known in history and their spirits are immortal," Senior Colonel Tan Kefei, spokesperson for the ministry, said at a press conference on Thursday.

Tan said that the entire army will remember the achievements of the martyrs, carry forward the spirit of the martyrs, resolutely fulfill the mission entrusted by the Party and the people, and strive to achieve the Party's strong military goals in the new era.

On September 16, the ninth flight of 88 Chinese People's Volunteers (CPV) martyrs' remains returned to China from South Korea, carried by a Y-20 large transport aircraft escorted by two J-20 stealth fighter jets. A solemn burial ceremony was held on the second day in Shenyang, Northeast China's Liaoning Province. All walks of life have been expressing mourning and admiration in memory of history.

A "more ordinary" martyr also has been remembered and mourned in his hometown and by the Chinese people. Zhang Zichen, a native of Northwest China's Shaanxi Province, drowned on October 2, 2021, at the age of 26, while defiantly entering the sea to save others in Qionghai, South China's Hainan Province. Later that year, he was awarded the title of martyr.

On Wednesday, his ashes were moved to the Martyrs' Memorial Garden in his hometown. A small memorial ceremony was held for him by local residents.

In Yangzhou, East China's Jiangsu Province, the residents took their own way to pay tribute to their martyrs, by providing Yangzhou's cultural heritage service to the martyrs' families and descendants - traditional pedicure.

On Tuesday, a local pedicure studio that has existed for generations in Yangzhou offered traditional moxibustion and pedicure services to the families and descendants of martyrs as part of a citywide initiative to care for veterans and families of martyrs in Yangzhou.

In the heroic city of Nanjing, Jiangsu which has been deeply marked in modern China's history after suffering through the Nanjing Massacre in 1937, the level of management and maintenance of martyr memorial facilities in county areas and below has been improved across Nanjing.

In the southwestern border region, the former comrades of a martyred policeman who died while fighting illegal drug smuggling was rushed to the martyr's cemetery to honor him on the occasion of Martyrs' Day, Xinhua News Agency reported Thursday.

Cai Xiaodong, a border management police officer, was shot while chasing drug traffickers and fell at the border on December 4, 2021. Comrades who came to honor him reported to him that his detachment had seized more than 580 kilograms of illegal drugs in 2022, "We didn't disgrace you."

Over the past few years, China's top judicial authorities have added 22 clauses, including defaming martyrs, attacking police and disturbing the operation of public transport, to the Criminal Law in a supplementary regulation that have come into effect. According to the supplementary articles of the Criminal Law, those who insult, slander or infringe upon the reputation and honor of heroes and martyrs shall be sentenced to imprisonment of no more than three years or criminal detention if the circumstances are serious.

On Friday, the ninth Martyrs' Day, China's top leaders and representatives from all walks of life will attend a ceremony to present flowers to fallen national heroes at Tian'anmen Square.