CHINA Public concerned over sexual assault against kids in countryside

Public concerned over sexual assault against kids in countryside 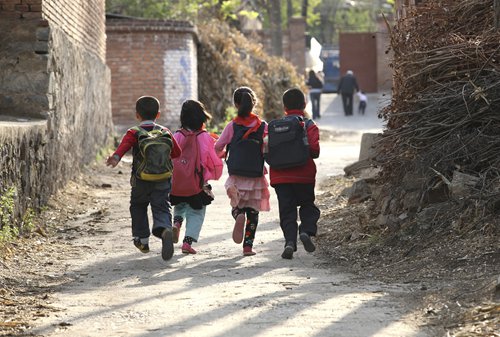 Children in a rural area head to school. (Photo: VCG)

Recently, a series of cases of sexual assault on children in rural China has triggered public concern that the sexual abuse of children has become endemic in China's countryside.

Meanwhile, people are also asking why China does not adopt chemical castration for serious sexual offenders.

The Supreme People's Court of the People's Republic of China has released the details of four typical cases of rape and molestation of children, including one in which the perpetrator was recently executed, the Xinhua News Agency reported in late July.

"Uncle put his hand into my underwear last night. He kissed me and touched my private parts, and said he loves me," Jiajia (pseudonym), a 12-year-old rural girl told Lu Baoqi, a social worker from the Qi Chuang social service center who works in juvenile protection in South China's Guangdong Province.

Jiajia was staying at the home of her best friend, Xiaoyi (pseudonym), that night. The two girls shared a bed in the living room and Xiaoyi's father was in an inside room. Most rural children don't have private space in their homes, which contributes to the lack of sexual safety awareness, Lu told the Global Times.

Jiajia told Lu that she was stunned and her mind went blank when it happened. She felt her body suddenly freeze, and was unable to push the man away.

Lu recalled what Jiajia said to her: "I don't know if he really loves me or not, but love is no reason for him to touch me. No matter what he thinks, he must not touch me without my consent."

"Jiajia had attended sex education classes provided by Qi Chuang and built a trusting relationship with me, which was the luckiest part of this case. Jiajia recognized the sexual assault and reported it to me in time," Lu told the Global Times.

Jiajia preserved her underclothes as evidence, which was something she learned in Lu's class on preventing sexual assault.

However, it still took Jiajia's family three days to make up their mind to call the police, Lu said.

"If the police send uncle to prison, who will take care of Xiaoyi? She is my best friend," Jiajia asked Lu.

Jiajia used to think this "uncle" was kind and always treated her well. He made sure Jiajia was safe and asked her to go home early every day, Lu said.

Jiajia's mother was worried about her daughter's reputation, as all the villagers would know if she called the police. She also believed that talking about sex with other people, even the police, was shameful.

With patient encouragement, Lu helped Jiajia call 12355, a youth helpline supported by the Central Committee of the Communist Youth League of China. With the permission of Jiajia's family, they initiated the alarm procedure.

The vast majority of sexual assaults against children are committed by acquaintances, Lu said.

The crime rate among acquaintances is always high, with the highest rate reaching 87.87 percent in 2014, according to Girl's Protecting.

Zhang Xinyu, a project officer at the Rural Women Development Foundation, which is based in Guangdong Province and provides support for the development of rural women and children, told the Global Times that rural children are mostly left-behind children who are taken care of by their elderly grandparents.

The absence of guardians results in a lack of protection and supervision for rural children. In many cases, they don't know who to talk to if they've been sexually assaulted, Zhang said.

Rural culture is relatively conservative and insular. The concept of sex being a shameful thing is still prevalent, and many people believe it's immoral to talk about sex openly.

This not only makes child victims afraid to report their assault to the police, but to some extent also encourages perpetrators to believe they can get away with their crimes, according to Zhang.

After Lu played a sex education film to her rural students, she asked them why the girl in the film was sexually abused. The boys, who were 13 to14 years old, wondered, "Is it because she was wearing black stockings? Or she went back home too late?"

Lu told the Global Times that sex education for rural children is lacking, compared with that of urban children, as there are not enough professional teaching materials and teachers.

We should not only improve education for children on how to prevent sexual assault, but also strengthen the legislation to severely punish the perpetrators, Lu said.

Megan's Law in the US requires the registration of convicted sex offenders and public notification when a sex offender is released into a community, Xinhua reported in July.

It was triggered by public anger over the 1994 slaying of young Megan Kanka by a released sex offender living near her home in New Jersey, according to the New York Times.

South Korea introduced the use of electronic ankle bracelets in 2008. Sexual crime recidivists and those who have sex with children under the age of 13 are required to wear them when they are released from prison, Xinhua reported.

Under a law that took effect in July 2011, South Korean judges can impose "chemical castration" on adults who sexually abuse people under the age of 16 for up to 15 years, depending on the case. This is the first time an Asian country has introduced such a punishment, according to Xinhua.

China issued Opinions on Punishing the Crime of Sexual Assault on Minors (Opinions) on October 24, 2013, which for the first time determined that perpetrators who committed sexual assault against a girl under the age of 12 were explicitly classified as having assaulted a minor, and would not be granted any exceptions on the basis of being unaware of her age, the Procuratorate Daily reported in 2013.

On March 2, 2015, the Opinions on Handling Domestic Violence determined that raping or molesting children who are family members constitutes domestic violence and must be dealt with severely in accordance with law, the People's Court Daily reported in 2015.

Zheng told the Global Times that in the past six years, while summarizing the current situation of child protection, China has also learned from the experience of other countries, adopting measures such as compulsory reporting obligations and personal safety protection orders.

Objectively speaking, there are still some gaps between China and some other countries in terms of legislation, Zheng said.

"However, I think the focus should be on the comprehensive protection of children from sexual assault and support for children who have been victims of sexual assault at the law enforcement level," Zheng said.

For example, the Opinions detailed the compulsory reporting obligation, under which people with special duties of guardianship, education, training, rescue, care and medical treatment toward minors, as well as other citizens and units have the right and obligation to report incidents of sexual abuse to law enforcement organs.

Some Chinese parents worry that legislation on the sexual assault of children is not strict enough. Once a child sexual abuse case is exposed by the media, chemical castration is often called for by the public.

Chemical castration is a form of criminal punishment involving a medical injection that can restrain the sexual impulse of offenders and prevent them from committing sexual crimes again.

Yu Yue, 37, a father of a 5-year-old girl, told the Global Times, "Sexual offenders against children in China should be chemically castrated just like those in South Korea, to ensure they aren't capable of sexually abusing children again."

Zhang Jinghua, a 28-year-old mother-to-be, said that she supports chemical castration out of disgust at sex offenders who target children.

Even though Zhang studied Sociology for her bachelors and master's degrees, she could not consider the use of chemical castration against serious sexual offenders as a human rights issue.

Zheng, the lawyer, told the Global Times that there are not enough empirical studies to prove the effectiveness of chemical castration at present.

It is difficult to assess whether chemical castration will lead to more extreme sexual assault tactics and greater harm to children, thus violating the principle of protecting children's interests. It is a disguised form of "corporal punishment", which involves human rights and legal issues, and needs to be fully considered in legislation, Zheng said.

Instead of chemical castration, China will fully establish an information database of sexual offenders against minors, which will prevent them from working in fields where they would have close contact with children.