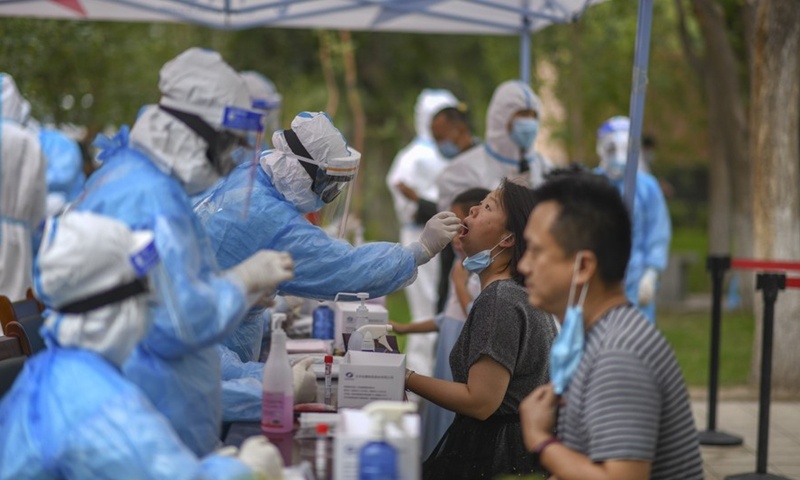 Medical workers collect swab samples for residents at Tianshan District in Urumqi, northwest China's Xinjiang Uygur Autonomous Region, July 20, 2020. Urumqi is carrying out free nucleic acid tests for all residents and people who are visiting the city, in a bid to screen for novel coronavirus infections and reduce the risk of the epidemic spread. (Photo: Xinhua)

Police in Kashi prefecture in Northwest China's Xinjiang Uygur Autonomous Region released a notice at around 5 pm Saturday on Sina Weibo, calling on residents to wear masks and do not listen to or spread rumors.

The police's notice came after many flights at the Kashi Airport were canceled. Since 4:25 pm, more than 20 flights with the destination of Kashi have been canceled or returned, or have landed in another airport, the Global Times learned. Most flights leaving Kashi were canceled after 5 pm.

"We are running normally," an employee at the security check of Kashi Airport told the Global Times on Saturday. "We have not received any notice involving a public health event or COVID-19. Cancellation of flights is the decision of airline companies."

A number of residents in Kashi reached by the Global Times said they received a phone message from the local government on Saturday, which said that Kashi would conduct a sweeping nucleic acid test for all residents to meet prevention requirements for the winter season.

During the testing period, in order to achieve the effect, the city will stop the flow of people and vehicles, according to the message. It calls for residents to cooperate and pay attention to official notices.

At least two Kashi residents confirmed with the Global Times that they have been informed orally about the sweeping nucleic acid test.

No official announcement has been released from the Kashi government as of press time.

An employee at the Kashi People's Hospital told the Global Times on Saturday night that residents should wait for notification from communities. "If your community tells you to do nucleic acid test, you should do it."

But employees at two other local hospitals said they have not received any notice about a large-scale nucleic acid tests yet.

A resident from Shufu county of Kashi said that the county is under lockdown and the county government is screening for COVID-19 cases.

Some photos and videos posted online Saturday afternoon showed supermarkets in Kashi crowded with people shopping for daily necessities such as toilet paper and vegetables.

"We are still open and are selling goods," Mireban, a saleswoman from a wine shop in the old town of Kashi, a local landmark, told the Global Times on Saturday.