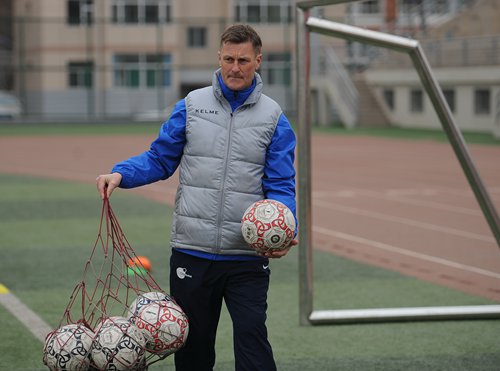 Primary and high schools in China have been on a hiring spree for foreign soccer coaches as the country tries to create fertile ground for the sport.

The ultimate aim is for China to become a world soccer force by 2050.

Young players are applauding the foreign coaches, who have brought new ideas to soccer training. At the same time, experts are also calling on China and overseas countries to ensure the quality of the coaches.

Soccer coaches from the Czech Republic have been selecting young players from among 600 first and second grade applicants at Meili Primary School in Jiaxing, Zhejiang Province, the Jiaxing Daily reported on July 5.

After several rounds of tests, a total of 40 boy and girl students will be trained by the Czech coaches over the summer holiday.

On June 21, the Culture and Sport Bureau of Xiuzhou district, Jiaxing and the Football Association of Czech Republic signed a cooperation agreement.

Under the deal, Czech coaches will work in local schools with young players every summer, and the association will train Chinese coaches.

In March 2017, the Ministry of Education (MOE) renewed a project for supporting foreign soccer coaches at public schools, which was initiated in 2015, according to a statement on the MOE website.

Even though the MOE said in the statement it would only sponsor two or three coaches in each Chinese provincial region each year, local authorities have employed many more foreign coaches by themselves.

German coaches will work in 10 schools in Mentougou district of Beijing in the following months, the Beijing Youth Daily reported in April.

There have also been coaches hired from top professional soccer clubs.

"The project is beneficial," said Wang Dazhao, a Beijing-based sports commentator. "Students and Chinese coaches and PE teachers could gain different ideas and means in soccer training from the foreign coaches."

Wang said that the foreign coaches he met "encourage children a lot" and have a pure passion for soccer. "They do not treat coaching soccer as work, but a hobby to enjoy."

"Many of them could coach using the Chinese language after several years of staying in China," he said.

Jone, a young Beijing soccer player, told the Global Times that he had good experience with his Portuguese coach.

Wang said that playing soccer is not primarily for winning achievements or making money, but rather for communicating with people and developing one's body and personality.

China launched a soccer reform program in 2015 and unveiled an ambitious blueprint in April 2016 to get 50 million children and adults playing soccer by the end of this decade.

However, not all plans of importing foreign coaches are going smoothly.

"We did not see much effect on our school from the foreign coaches, so we decided not to apply for more this year," an employee surnamed Xia from Hainan Middle School in Haikou, South China's Hainan Province, told the Global Times on Wednesday.

"I saw his resume. He was graduated from police school… not a professional coach," Xia said.

"He could only train school soccer teams, but could not give PE classes to most students," Xia said.

According to a joint statement issued by the MOE and the State Administration of Foreign Experts Affairs in February 2018, hiring a high-quality foreign soccer coach from European countries costs 335,000 yuan each year, and from Latin America, 470,000 yuan, people.cn reported.

Coaches should be between 22 and 55 years old and have a Coaching C License from the Union of European Football Associations or equal qualifications.

"China and foreign countries should have standards in selecting coaches through agreements, to ensure their quality," Wang noted.