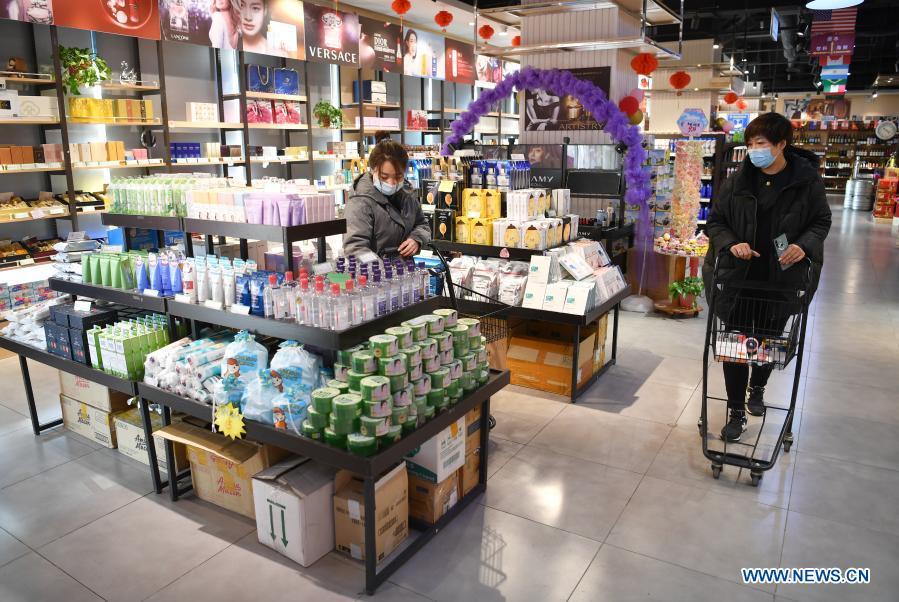 At the annual sessions of the top legislature and the top political advisory body, deputies deliberated the 2021 government work report and the draft outline of the 14th Five-Year Plan (2021-2025) for national economic and social development and the long-range objectives through the year 2035.

The draft outline aims to improve the well-being of the people by boosting employment, actively responding to an aging population, and raising the average life expectancy by one year in the next five years. The per capita disposable income will also keep pace with GDP growth.

While containing COVID-19, the Chinese government has encouraged the resumption of work and production to boost employment and people's well-being.

"It is with the government support that my business has survived," said Du Dungang, chairman of a snack company based in Qingdao, east China's Shandong Province.

Du's company mainly exports its products but met with operational difficulties early last year when orders worth 11 million yuan were canceled due to the pandemic. The company was on the brink of bankruptcy when it received a bank loan of 10 million yuan with the government's help. It then managed to sell its stock to the domestic market.

The survival of the business has kept more than 30 workers employed. Even in the toughest time when it suspended operations, the company managed to make its payroll.

"They are all my old pals and have to support their families," Du said.

Despite the epidemic, China has successfully eradicated absolute poverty -- a historic feat for the world's most populous nation.

The government work report said China would set a five-year transition period to consolidate and expand its achievements in poverty alleviation and continue to promote rural vitalization.

In a drive to boost consumption at county and township levels, China will promote e-commerce and express delivery services to cover rural areas in 2021, the report said.

The five-year plan draft outline promised to use multiple channels to add income to the low-income group and expand the size of the middle-income group, among other measures to optimize the income distribution structure.

Xu Xiaoying, a migrant worker from east China's Jiangxi Province, said she was glad to learn that the country will take actions to include migrant workers in the middle-income group.

"The wages of migrant workers are relatively low, and higher income will not only improve our living standards but also help stimulate consumption," she said.

According to the government work report, government subsidies for basic medical insurance for rural and non-working urban residents will increase by an average of 30 yuan per person this year. Subsidies for basic public health services will also increase. More medicines for chronic and common illnesses and high-priced medical consumables will be covered by bulk government purchases to lighten the burden on patients.

In the next five years, China will build a high-quality education system by deepening educational reforms. The average number of years of schooling among the working-age population will rise to 11.3, the draft outline said.

Other aspects addressing people's well-being include renovations of old urban communities, more kindergartens, and an increased number of doctors.

John Ross, a senior fellow at the Chongyang Institute for Financial Studies under Renmin University of China, said the increasing income and more complex needs will significantly enrich the lives of the Chinese people.