CHINA Putin: Strategic partnership with Beijing is a priority

Putin: Strategic partnership with Beijing is a priority 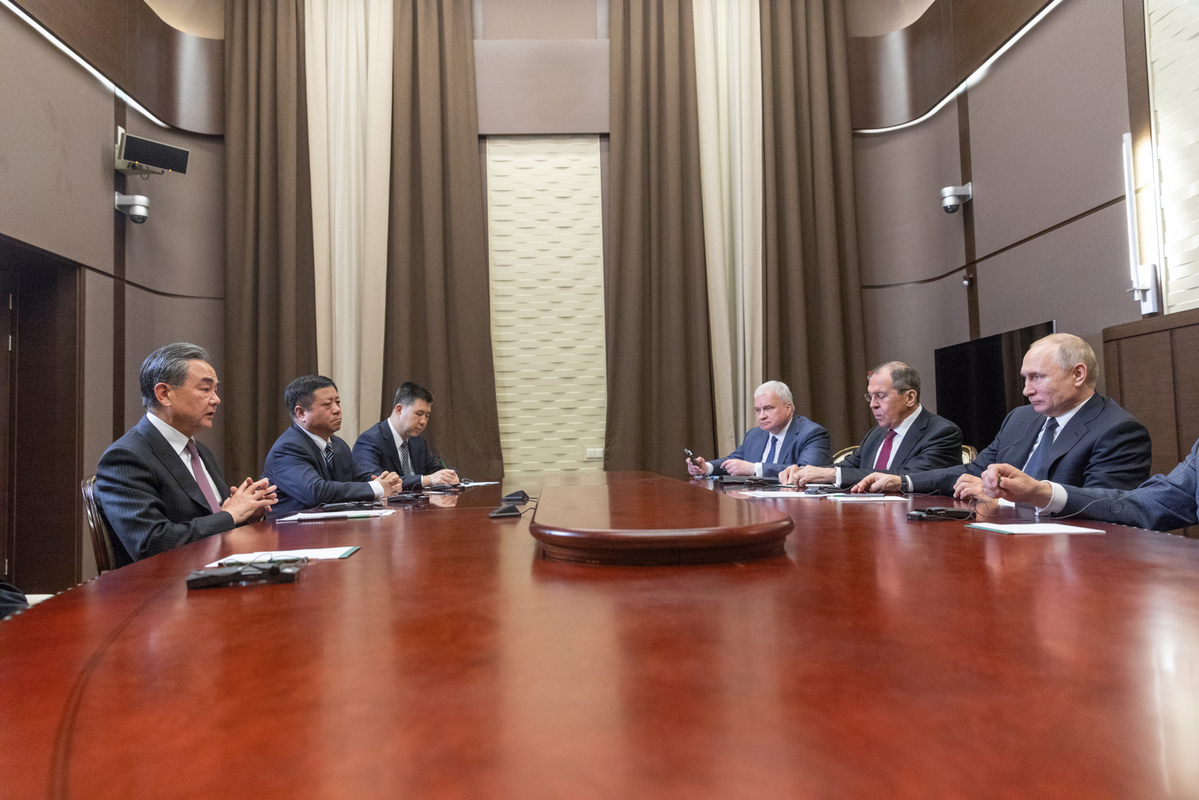 Russian President Vladimir Putin has said that developing a comprehensive strategic partnership of coordination with China is the priority of his country's external relations.

Putin made the remarks when meeting Chinese Foreign Minister Wang Yi on Monday in the Black Sea city of Sochi.

"I met with President Xi Jinping last month, and we reached new agreements over the coordination between the Belt and Road Initiative and Eurasian Economic Union," Putin said.

Putin said the two leaders also talked about major international and regional issues. "I am looking forward to meeting President Xi in June during his state visit to Russia, and jointly celebrating the 70th anniversary of the establishment of diplomatic relations," he said.

Wang said Putin's visit to China last month as well as his participation at the Second Belt and Road Forum for International Cooperation has made important contribution to the forum in Beijing.

He said the relation between the two countries has reached the highest level in history under the leadership of the two presidents.

Wang, who is also a State Councilor, met Russian Foreign Minister Sergei Lavrov earlier on Monday during his two-day visit to Russia.

He said the first meeting between the two presidents this year pointed out the developing direction of the Sino-Russian relations, and made a good start for the neighbors to celebrate the 70th anniversary of the establishment of diplomatic ties.

The comprehensive strategic partnership of coordination between the two countries, which is built on strong political mutual trust and firm mutual support, has no intention of sowing discord with any third country, Wang said.

No matter what changes occur in the world, China and Russia will deepen cooperation and strengthen their strategic partnership, he said.

Wang said Xi is visiting Russia next month, and the two leaders will make a comprehensive summary of the development experience of China-Russian ties in the past 70 years and make strategic plans for the future development.

Wang said he was glad to see the Sino-Russian political relationship has converted into practical cooperation results, and the bilateral trading volume reached $100 billion last year, the highest in history.

In the current international community, unilateralism has been crashing the existing system and some basic rules of international relations, and rumors and discredit have been tools to attack other countries.

Under this international situation, China and Russia as two powers with responsibilities should enhance strategic coordination to safeguard the mutual interests of both countries as well as maintaining the peace and stability of the world, Wang stressed.

Lavrov agreed with Wang, saying this year is remarkable for the Sino-Russian relations, as the leaders meet frequently and the two countries have close communication in different levels and in various fields.

He said Russia is seeing its relationship with China is the priority in its diplomacy, which meets the long-term interests of Russia.

China and Russia are key partners on the international stage and have established a close and efficient communication mechanism in many multilateral frameworks such as in the United Nations, G20, Shanghai Cooperation Organization and many others, and two countries will maintain communication in various platforms, said the Russian diplomat.