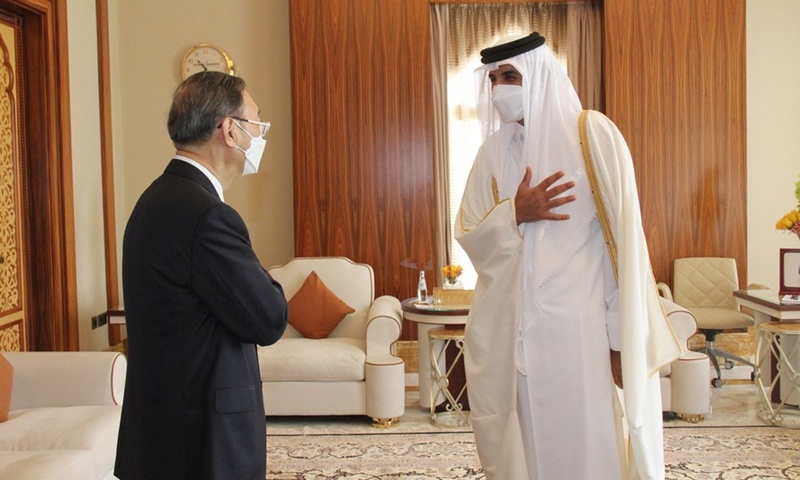 Qatari Emir Tamim bin Hamad Al Thani (R) meets with Yang Jiechi (L), a member of the Political Bureau of the Communist Party of China (CPC) Central Committee and director of the Office of the Foreign Affairs Commission of the CPC Central Committee, in Doha, Qatar on Feb. 20. (Photo: Xinhua)

Yang, a member of the Political Bureau of the Communist Party of China (CPC) Central Committee and director of the Office of the Foreign Affairs Commission of the CPC Central Committee, conveyed Chinese President Xi Jinping's cordial greetings to the Qatari emir.

Yang said that under the personal care and guidance of the leaders of the two countries, the China-Qatar ties have witnessed rapid development in terms of pace and depth, with political mutual trust constantly strengthened and pragmatic cooperation displaying strong vitality.

He noted that China supports Qatar in exploring independently a development path suited to its national conditions, and its efforts to safeguard national sovereignty and security.

China is ready to work with Qatar to boost the coordination of development strategies, deepen cooperation in the joint construction of the Belt and Road Initiative (BRI) as well as in fighting the COVID-19 pandemic, and constantly enrich the content of the China-Qatar strategic partnership, the senior Chinese diplomat said.

Yang expressed China's full support to Qatar in hosting the 2022 FIFA World Cup, pledging that China will continue to support Chinese companies in overcoming the challenges created by the pandemic in order to complete the construction of the relevant stadiums on schedule with high quality.

China supports Qatar in playing a bigger role in international and regional affairs, and is willing to work together with Qatar to practice multilateralism with concrete actions and safeguard the common interests of developing countries, Yang noted.

He also voiced China's support to the efforts by the Gulf Cooperation Council (GCC) countries to strengthen solidarity and cooperation, and jointly promote regional stability and development.

For his part, the Qatari emir asked Yang to convey his sincere regards to President Xi Jinping.

He said that Qatar is eager to further develop its relations with China, deepen strategic communication, enhance mutually beneficial cooperation in the fields of energy, investment, digital economy, culture and infrastructure construction within the BRI framework, and continuously seek new progress in advancing the China-Qatar strategic partnership.

He also expressed Qatar's willingness to strengthen coordination with China on international occasions to jointly promote world peace and stability.