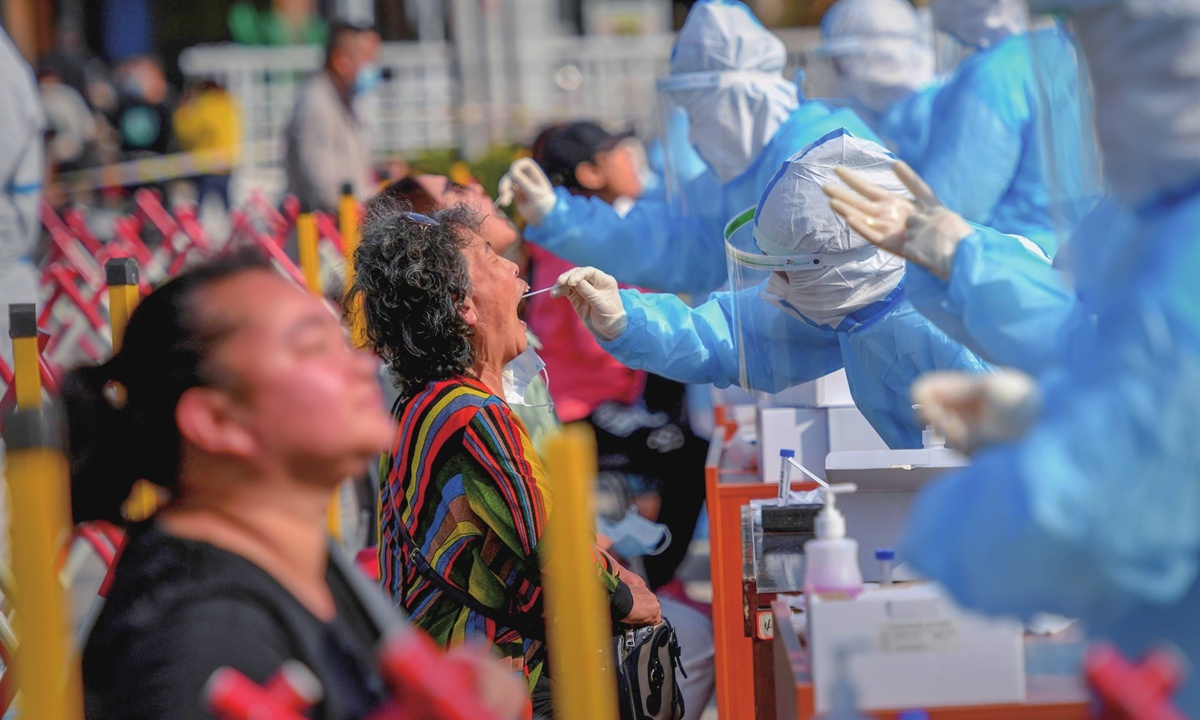 Residents of Qingdao, East China's Shandong Province line up for nucleic acid tests on Monday, after 12 people in the city tested positive for the coronavirus. The city on Monday vowed to test 9 million of its residents within five days. Photo: VCG

With no clear sign pointing to the source of a recent flare-up of COVID-19 in Qingdao, East China's Shandong Province, health experts speculated that there might have been a cross-infection within a local hospital, and the apparent absence of other new infections beyond this transmission chain is a good sign.

The source of infection for this outbreak is strongly linked to the Qingdao Chest Hospital, and the possibility of community transmission is low, said Jiang Fachun from Qingdao disease prevention and control center, at a press conference on Tuesday.

Some Chinese media outlets, including Caijing magazine and China News Week, have quoted insiders as saying that preliminary investigations showed the spread of the novel coronavirus was caused by incomplete disinfection after CT checks. The reports could not be confirmed as of press time.

A Qingdao-based public health expert told the Global Times on condition of anonymity that all signs of the sources of infections pointed to the Qingdao Chest Hospital. Cross-infection involving CT rooms could not be ruled out.

If the CT facilities were not properly disinfected, the COVID-19 virus could survive for at least 24 hours, which could cause cross-infections, Yang Zhanqiu, a Wuhan-based virologist, told the Global Times.

"Any exposure could cause the spread of the coronavirus if imported cases being treated in the hospital were not under appropriate closed-loop management," he said.

Beyond the 12 cases reported on Sunday, communities in Qingdao and other cities in China had reported no new infections as of press time, which was interpreted by experts as a good sign.

"Two days have passed, but no new cases have been detected, meaning the small cluster of infections did not cause a further spread, like some people hyped online. It is a good sign," the anonymous expert noted, calling on people not to overreact.

As of Tuesday afternoon, the coastal city had collected nucleic acid tests of more than 4.23 million people, with a total of 1.9 million results coming out. The city aims to test its entire 9 million residents within five days.

Other cities inside Shandong Province had tracked down and tested more than 225,000 people who visited Qingdao since September 23. Results showed they were negative for the coronavirus as well.

In an effort to plug any transmission loopholes related to an infected taxi driver, Qingdao officials said on Tuesday that all 52 close contacts of the driver had been quarantined for medical observation. Two rounds of nucleic acid tests on them were negative. Another 89 related people of those close contacts were also being closely monitored.