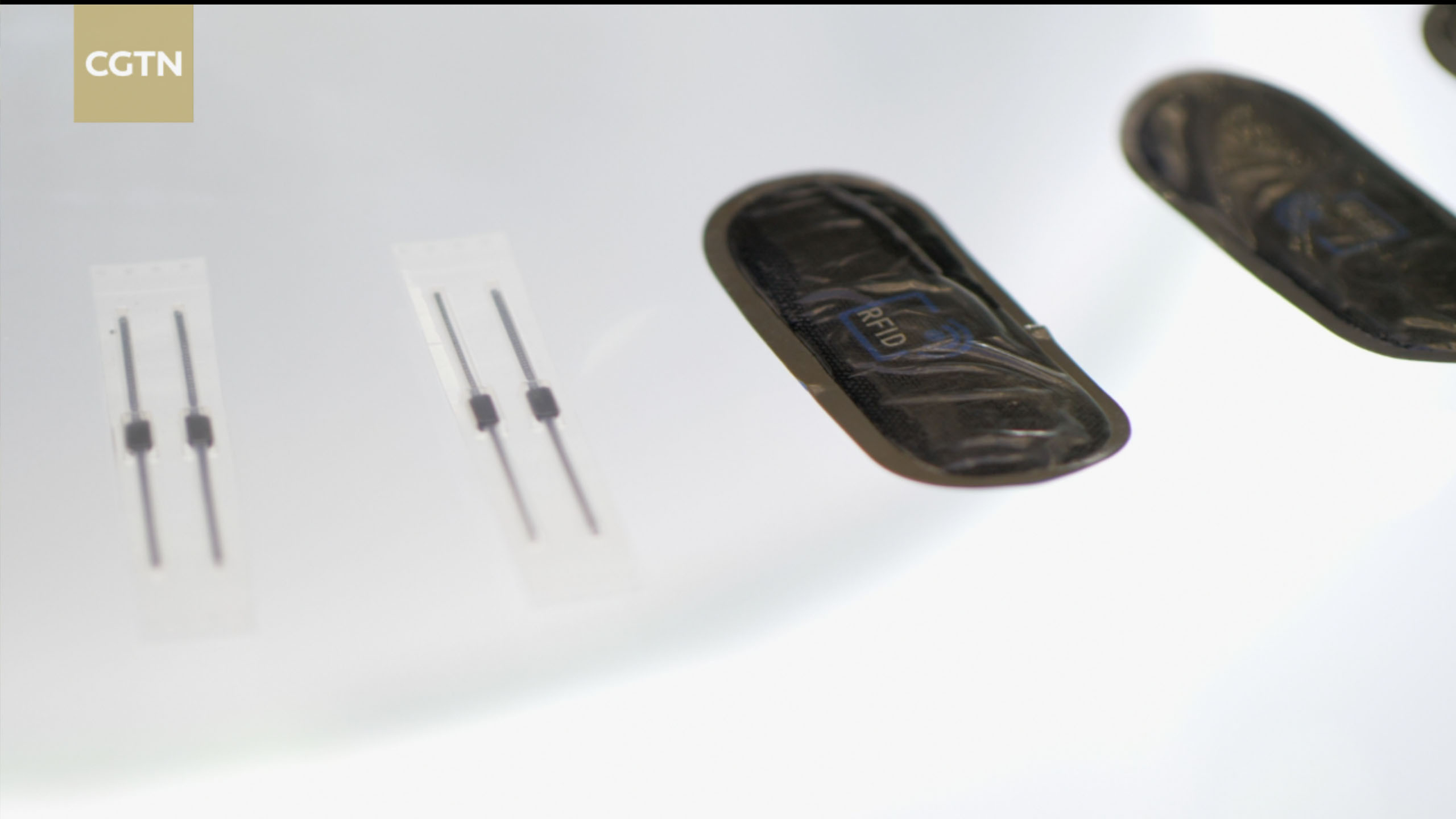 Engineers at a Chinese manufacturer of tire-making machinery in the coastal city of Qingdao are proud of having reinvented the wheel – literally. Their foray into information technology and the Internet of Things (IoT) has helped them drive innovation in the rubber and tire industries, and ride the wave of intelligent manufacturing under the ambitious "Made in China 2025" initiative.

Inside the headquarters of Mesnac, "smart" is a term used repetitively, almost excessively – smart tires, smart solutions, smart factory. The company has invested over a decade redefining what a tire does, and is now focused on changing how a tire is made.

Mesnac made news headlines in 2008 when it bought two million Radio Frequency Identification (RFID) tags to embed in rubber wheels. The technology had already been used to identify and track people, packages, and equipment, but its implementation in tires was unheard of.

The technology consists of a small data-encrypted chip embedded in an asset and a reader that visualizes the info when placed at proximity of the tag.

But the nature of rubber, whose making requires high pressure and temperature, presented speed bumps to the application of the technology. The fact that the chips were ending up in wheels, which will then navigate all sorts of rugged terrains, did not make the undertaking any smoother.

"We need to make sure that the RFID tags are not influencing the tires or the safety of tires, and that they can withstand high temperatures during the manufacturing process of the tires and their usage. Roads can have complex conditions, so we need to ensure that the embedded RFID tags could last during the whole life cycle of the tire," Dong Lanfei, head engineer of the IoT division at Mesnac, told CGTN.

China's speedy economic development fueled the growth of the country's tire industry. A boom in infrastructure projects, which linked cities, towns and villages in a complex web of roads and highways, has been a boon for tire manufacturers, whose output also benefitted from a popular drive for automobile ownership.

China is already the world's largest producer of tires, with estimates putting the country's output at 960 million units last year, according to IBISWorld data.

But manufacturers not only want to go big, they also want to go smart.

Technologies, such as RFID tags, are a telltale of how the future is shaping up to be: interconnected, convenient, and practical. 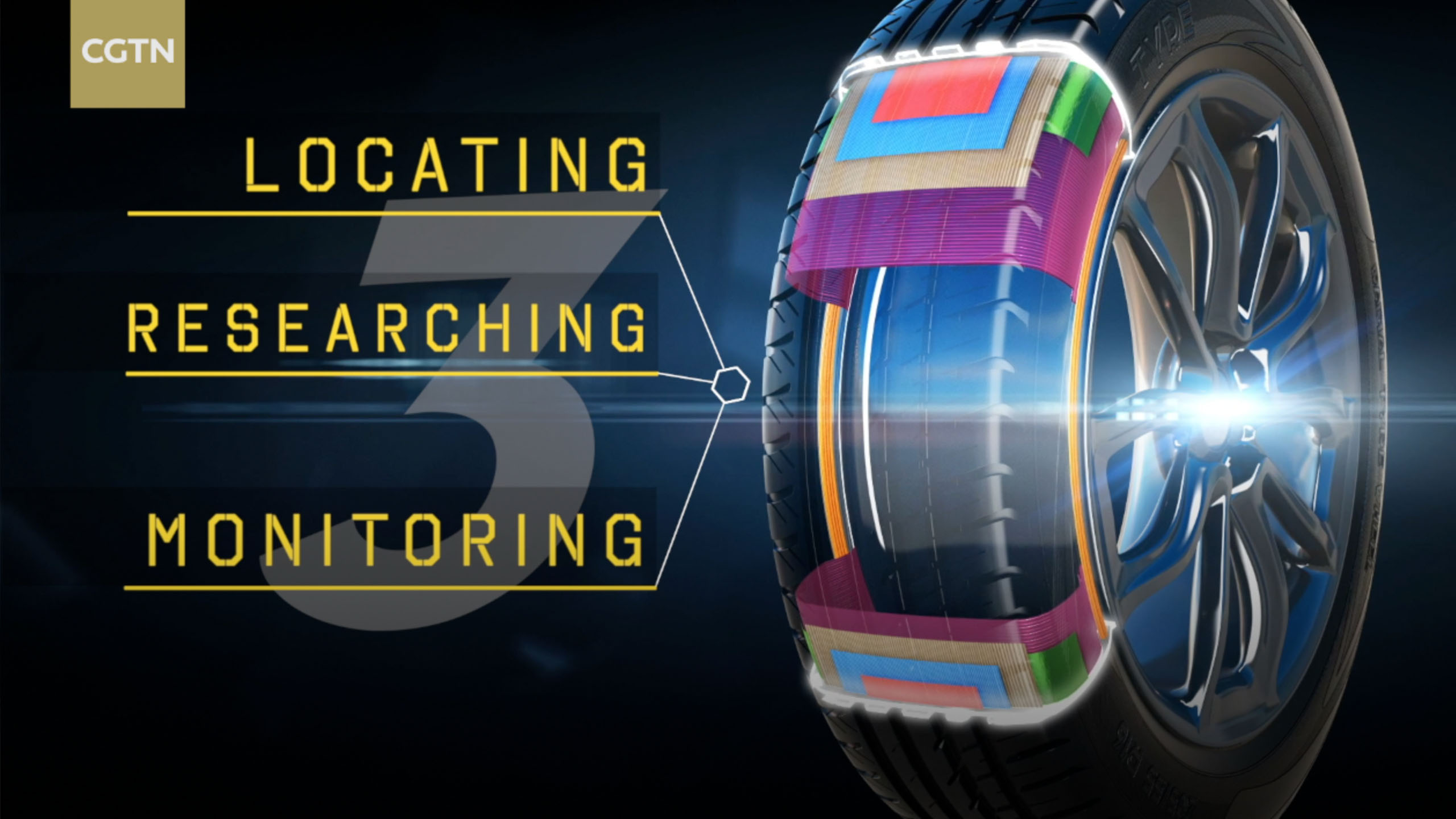 The three functions of RFID tags in tires. (Photo: CGTN)

Dong speaks passionately about the different applications of the Chinese innovation, and how it will revolutionize the function of wheels.

The RFID label works as a unique identification card, enabling the tires to be tracked through the production and distribution phases.

With the help of the technology, car owners can "identify which company manufactured the tire, when it was produced, and what are its specifications," she said. This establishes a level of transparency, and helps prevent counterfeiting.

The information concealed inside the small labels are also vital for tire manufacturers, and can potentially drive innovation in the field, as it lets them "manage, monitor and track the whole life cycle of the tire."

Companies can document how long and in what way tires have been used, monitor their performance and cost-effectiveness, and analyze tire-related data such as rotation speed, temperature, and pressure.

"The information can help the manufacturers better understand how the tire is working, and hence work on improving its quality. If a batch of tires is substandard, traceability helps them go back through the supply chain to the materials that were used, and stop the production of this tire [model]," she said. 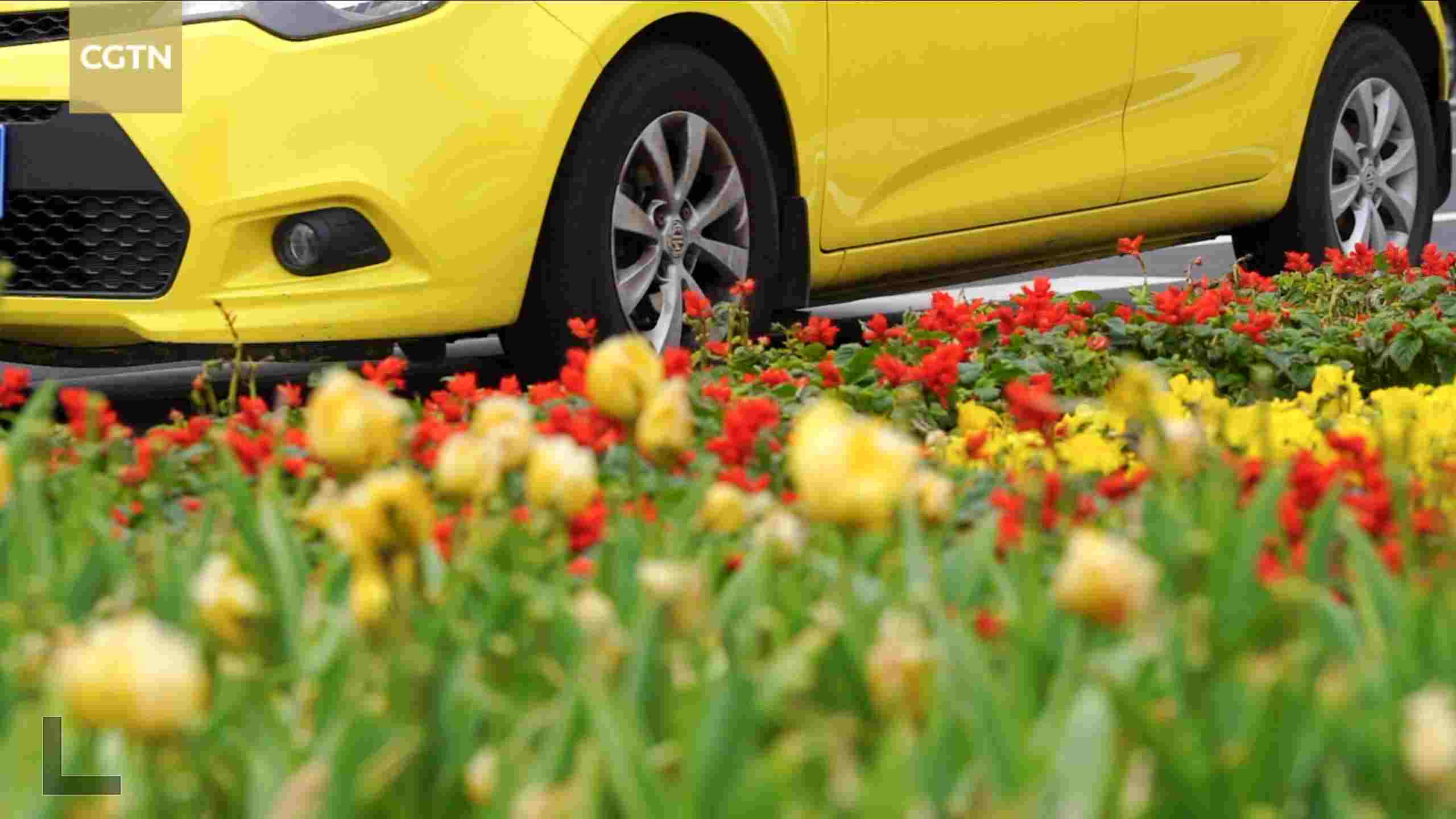 Monitoring the condition of wheels as they roll on the streets can also prevent accidents as RFID tags can serve as an early warning system that identifies when the tires should be inspected or even maybe replaced before it is too late.

The Qingdao Public Transport Group Rail Bus company has already employed RFID tags to manage and monitor its fleet of buses operating in the coastal city. However, the implementation of the technology is still on a very limited scale, and tagged tires for passenger vehicles are yet to hit the market in China.

But Dong is optimistic about the future applications of RFID tags in the auto industry, emboldened by the company's R&D capability in the field and the Chinese government's support.

New doors of opportunity will open wide once tags can actively transmit a signal (so far a reader pointed towards the chip is needed for data to be displayed) and a more stable Internet connection is available. But the future might not be as far off as one would think: Chinese telecommunication companies are racing to provide full 5G services as early as next year, offering faster connection speeds on the go.

China's homegrown BeiDou Navigation Satellite System, to which around 4.8 million commercial vehicles are already connected according to Ran Chengqi, director general of the China Satellite Navigation Office, is also set to play a decisive role in the functional upgrade of the tags.

With a real-time car positioning system in service and "Internet of Cars" in full swing (IoT for vehicles), "one day we can maybe use our phones to retrieve data from the tires, and check if it's time to change them, [the location of] the nearest repair shop, and when we can go [there]," Dong said.

Mesnac's focus on RFID tags has placed it on the map as a pioneer in the tire industry, paving the way for collaborations with over 20 tire companies. Goodyear, Michelin, Pirelli, and Bridgestone are some of the big international names the Chinese company has worked with in recent years. At home, Mesnac counts Wanli Tire and Linglong Tire as its clients.

The company's innovation drive has gained momentum amid comprehensive revamps of the country's manufacturing process, as part of the "Made in China 2025" plan.

The ambitious blueprint seeks to turn China into a breeding ground for cutting-edge technologies, innovation, and entrepreneurship by enhancing industrial capacity, upgrading industries, and expanding information and digitization. 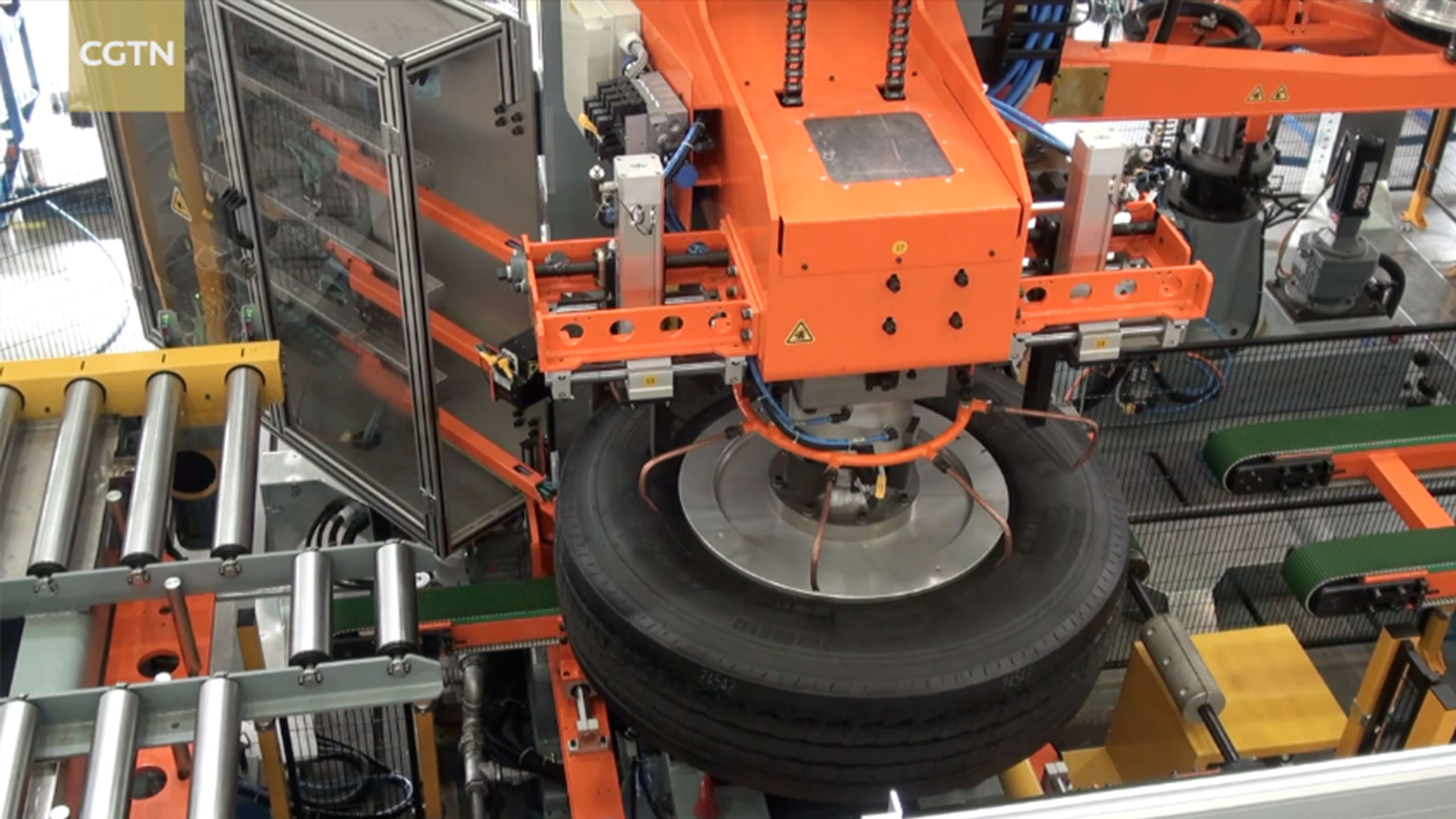 Managers at Mesnac say their R&D vision is aligned with the national plan, and benefits from an increased focus on robotics – one of the 10 priority sectors highlighted in the plan.

The company has been heavily investing in the "smart factory" concept, which it raised for the first time in the tire industry in 2014, aiming to develop an autonomous process for tire manufacturing, through an interconnected network of sensors, software and self-repairing systems that wean the machines almost entirely off humans.

Mesnac is a witness to the changing tides in the industrial scene in Qingdao, which in turn is a symbol of a China that wants to be known as a technology leader instead of "the world's factory."

The coastal city has turned its back to heavy manufacturing and went down the road of information technology and advanced equipment manufacturing, which are now considered Qingdao’s pillar industries.

In 2016, Qingdao's GDP crossed the one-trillion-yuan mark, as the city saw its high-tech manufacturing industries thrive at a time China is shifting to higher gears.