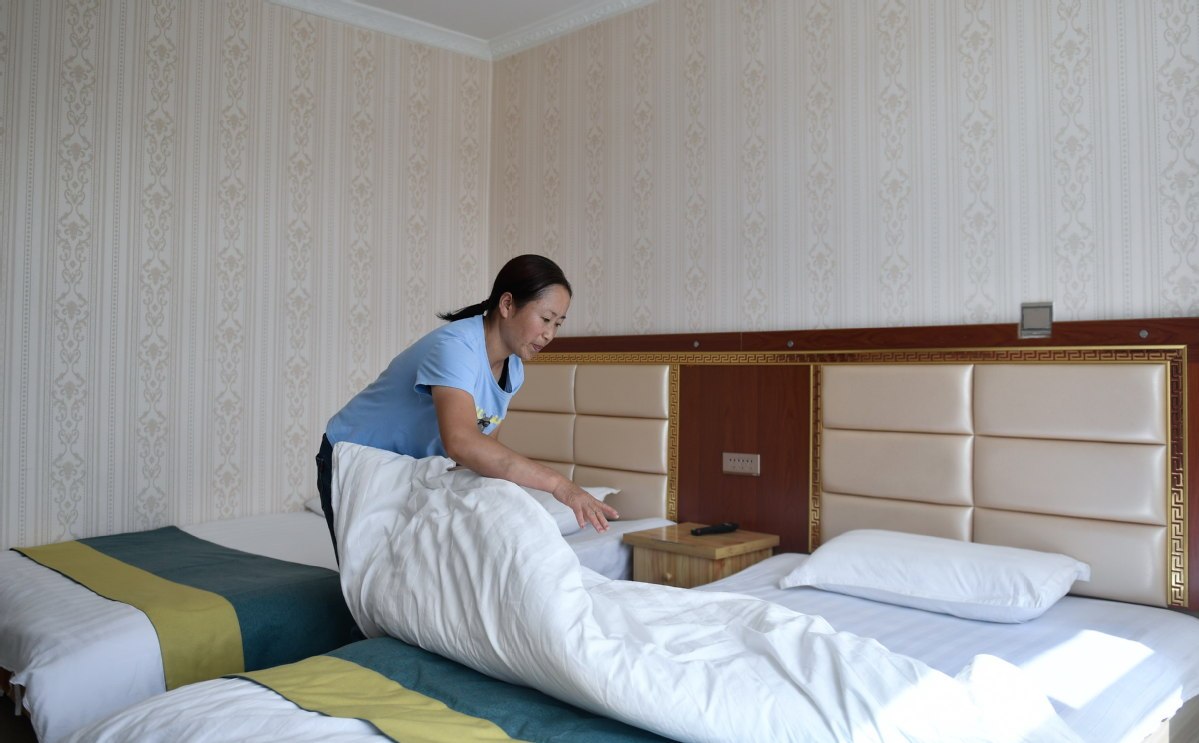 Shen Deping, a resident of Bayin village in Chaka, Qinghai province, makes beds at the hotel run by her family last month. Thanks to railway services, tourists are visiting the Chaka Salt Lake, allowing people like Shen to live better lives. (Photo: Xinhua)

XINING－The Qinghai-Tibet Railway, the world's highest and longest railway, has not only made travel convenient for residents on the Qinghai-Tibet Plateau but has also brought them enormous wealth.

"Our lives have changed a lot since we moved to Chaka township," said Shen Deping, a resident of the township's Bayin village. Along with other villagers, Shen and her family moved to the township from mountainous areas to shake off poverty in 2016.

"Before moving here, I planted wheat, highland barley and other crops to make a living. We lived a hard life," she said. Thanks to the booming tourism brought by the railway, Shen, like many other villagers, has now shed poverty.

Bayin is close to Chaka Salt Lake, a popular tourist attraction in Qinghai province, and the local government has encouraged villagers to run hotels and has provided subsidies for them.

In 2016, the China Railway Qinghai-Tibet Group launched a tourist train service for the attraction, which has made more than 500,000 trips so far.

Shen's family hotel business has been popular, especially during this year's National Day holiday from Oct 1 to Oct 8.

"Some customers booked their orders more than a month in advance," she said. Since the launch of the train service, the family has doubled its income and can earn around 300,000 yuan ($44,000) each year.

"I am planning to expand our business and hire more waiters, Shen said. "It is possible for us to double our income again."

Besides tourism, the railway has also promoted the development of logistics on the plateau. More than 800 households in Sema village in Lhasa city, capital of Tibet autonomous region, escaped poverty in 2015 thanks to the industry.

"There was not even a decent electrical appliance in my house before the railway was open to traffic," said Nyima Tserin, a villager in Sema.

In 2007, the village established a logistics company with the support of the local government. Starting with 30 minivans, the company now has more than 100 large vans.

"The per capita income of villagers increased to 10,000 yuan in 2018 from the original 2,000 yuan," said Nyima Tserin."Our job managing logistics is busier than before, but we are also happier than before."