China’s railways and airlines saw an increase in passenger flows as the three-day Qingming Festival holiday started on Saturday.

The total number of passenger trips topped 51.43 million on Saturday, official data showed. The reading jumped 157.26 percent from the same period of last year, according to the Ministry of Transport.

A peak of more than 14 million passenger trips in a single day took place on Saturday, a 276.7 percent increase year on year, according to the China State Railway Group.

The latest data also show that airlines handled over 1.5 million passenger trips in China on Saturday, a jump of 360.6 percent compared to the first day of the holiday last year.

The Yangtze River Delta region had a daily record-high number of railway passengers for the year on Friday. A total of 2.64 million people took trains in the region, up 1.9 percent from the same day in 2019, China Railway Shanghai Group said on Saturday.

That figure was estimated to surpass 3 million on Saturday, a day before the Tomb-sweeping Day.

Tomb sweepers and tourists account for the majority of passengers. Railway stations including Shanghai Hongqiao, Hangzhou East and Nanjing South have had big crowds from 8am on Saturday, the group said.

An additional 59 trains will be put into service on Saturday to cope with the growing demand. 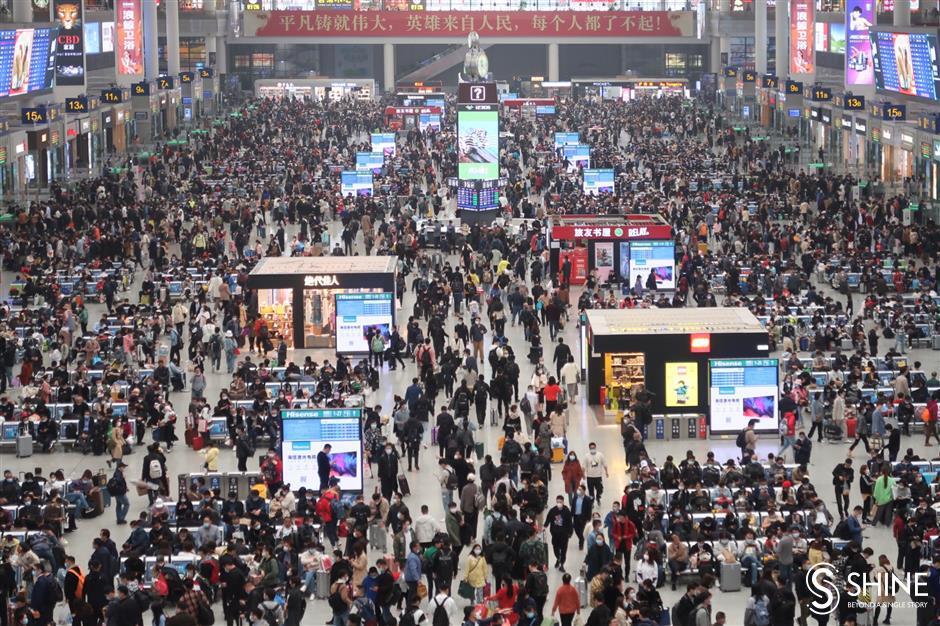 Tomb-sweeping Day, also known as Qingming Festival, was on Sunday. It is a traditional Chinese holiday during which people pay tribute to deceased family members. Many also spend the holiday traveling.

Shanghai’s 54 cemeteries and columbariums were visited by 1.068 million tomb sweepers on Sunday alone as of 4pm. This was 51 percent down from the Qingming Festival in 2019 under a reservation system, local authorities said.

Since March 27, when the city’s tomb-sweeping peak season began, cemeteries and columbariums in the city have been visited by 3.43 million tomb sweepers.

China’s Ministry of Civil Affairs said that over 32,000 funeral-service agencies with on-site tomb-sweeping services were open across the country on Saturday, receiving about 19.3 million people.

Meanwhile, about 1.85 million Chinese people opted to mourn the deceased through 1,900 online platforms, the ministry added.