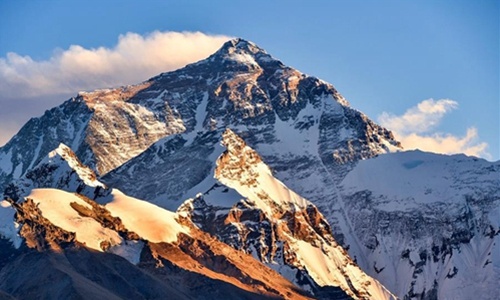 Chinese netizens have been dazzled by views of the north side Mount Qomolangma, the world's tallest peak which few can see in real life, after connecting to a livestream broadcast from the highest terrestrial 5G signal station in the world at an altitude of more than 5,000 meters.

Built by China Telecom, one of China's big three telecom firms, the livestream displays the beauty of Mount Qomolangma, known as Mount Everest in the West, 24/7 through a 4K HD live broadcast with a 360-degree VR rotating view.

One netizen, in a poetic post on China's Twitter-like Sina Weibo, described the views as "white clouds flowing in the blue sky upon the snowy peak, the golden sunset and starry night."

The broadcast has accumulated viewers since Thursday on multiple livestreaming platforms after China Telecom deployed three 5G broadcast stations at Qomolangma base camp at an altitude of more than 5,000 meters. The mountain, often referred to as the roof of the world, is 8,848 meters above sea level.

Construction of the three base stations had to overcome a series of difficulties such as workers suffering from altitude sickness, equipment transportation and geo-surveys. The stations were completed on April 13, and are the world's highest 5G signal base stations, Liao Hongfeng, a spokesperson of China Telecom, told the Global Times on Sunday.

China Telecom has installed two sets of cameras at the 5,300-meter camp, one set pointing at the camp and another at the snowy peak. A set of 360-degree VR cameras were installed on high ground at 5,000 meters.

"We want to provide a chance for Chinese people who are staying at home due to the coronavirus to enjoy panoramic views of the mountain's beauty through cutting-edge technology," Liao said. Most routes in the Qomolangma peak region are closed due to COVID-19 control and for environmental reservation and protection.

The broadcast is a result of joint efforts from firms that include tech giant Huawei, industry media Communication Information News reported.

Chinese netizens were enthusiastic about the livestream. Some said they would love to see a livestream of a summit attempt in the future.

"It's so different from pictures. The stillness of this sacred mountain is so real. The technology closed our gap and its beauty makes me forget about the pandemic temporarily," said one Weibo user.

After the 1960 feat, the spirit of Qomolongma stood for tenacity and courage, which inspired generations of Chinese people to become climbers.

"The views through VR are just immersive and impressive. Maybe I'll never have a chance to climb it, but our predecessors must have been really courageous and determined when facing such a spectacular but harsh environment," said a netizen on Weibo.

"With 5G, I was able to look over at the construction of Huoshenshan [COVID-19 field hospital in Wuhan, Hubei Province] and now I can appreciate the beauty of an extreme environment. Technology can overcome human limitations and connect people to surmount any difficulties, including epidemics," said a net user.

5G technology enabled 200 million Chinese netizens to observe the construction of Huoshenshan Hospital in Wuhan when the city was being hit hardest by the pandemic. The 24-hour livestream helped people feel they were standing together with Wuhan residents at their most difficult hour, netizens said.