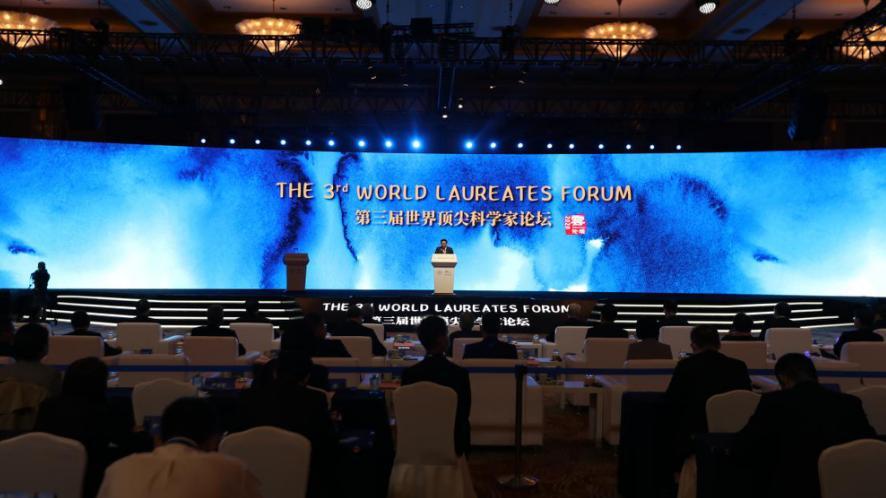 The Third World Laureates Forum kicks off in Shanghai on Oct 30, 2020. (Photo: cctv.com)

Quantum physics was a key focus of leading scientists at the third World Laureates Forum, which concluded in Shanghai on Sunday, as they addressed the frontiers of science and the development of disruptive technologies.

Nearly 140 world-class scientists, including 61 Nobel Prize winners, attended subforums during the three-day event, in person or virtually, to discuss the latest advances in fields including brain science, artificial intelligence and quantum physics.

The event opened the day after the conclusion of the Fifth Plenary Session of the 19th Central Committee of the Communist Party of China, which mapped out a course for the country to make major progress in developing core technologies in key areas and become a global leader in innovation by 2035.

Three subforums in Shanghai were dedicated to quantum physics, with five Nobel Prize laureates in physics and two Chinese academicians taking part, reflecting the importance given to the cutting-edge field by President Xi Jinping last month.

Xi, who is also general secretary of the CPC Central Committee, said during a group study session of the Political Bureau of the CPC Central Committee in mid-October that quantum science is at the forefront of a new round of scientific, technological and industrial revolutions, and China will need to advance its development with more strategic planning and supportive policies and investment.

Quantum physics gives a precise description of the basic force of nature and leads to achievements explaining how matter and light interact through basic processes involving fundamental particles such as atoms and photons. It will have major applications in the development of communication, computing and precision measurement, according to Serge Haroche, 2012 Nobel Prize laureate in physics and a professor at the College de France.

He said in a subforum that the world is undergoing a second quantum revolution, and China is playing an important role in quantum communication research.

However, the strange behaviors of quantum particles were not fully explored in the development of classical computers or satellite navigation systems, which was the key difference from today's second revolution.

"We have now acquired the ability to isolate and manipulate single quantum systems and directly reveal their strange behavior," Haroche said. "We hope we will be able to harness this quantum strangeness in new devices with amazing possibilities to improve computing, communication and measurement."

One example is the quantum satellite. Haroche said the technology is based on the principle of quantum entanglement, an idea that posits that two quantum systems can still be somehow linked even if they are light-years apart, a phenomenon that Albert Einstein called "spooky action at a distance".

Detection of entangled photons provides a key for coding and decoding secret messages, and China has used it to develop the Micius satellite, launched in 2016.The satellite has successfully transmitted unbreakable information to ground stations 1,200 kilometers away, establishing a steppingstone for an ultra-secure communication network.

"Quantum information is a very promising field of research," Haroche said. "It illustrates the deep link between basic science, motivated by curiosity, and applied research aimed at developing innovative devices."

In a subforum with the theme "frontiers of science and disruptive technologies" on Friday, Norwegian neuroscientist Edvard Moser and his wife May-Britt Moser, who both received the Nobel Prize in physiology or medicine 2014, introduced their findings on cells that constitute a positioning system in the brain. They were followed by Takeo Kanade, a Japanese computer scientist and one of the world's foremost researchers in computer vision, who presented his studies in autonomous driving.

Such disruptive technologies are arguably at the frontiers of science, but they are also the subject of public concerns over potentially disruptive effects on society, such as the safety of self-driving vehicles, as well as ethical issues about whether advances in neuroscience could lead to mind reading or manipulation, said Poo Mu-ming, a Chinese-American neuroscientist who is also an academician of the Chinese Academy of Sciences.

Calling himself a firm believer in the potential for AI to be smarter than humans, Kanade said people will never be able to outsmart machines in some facets, such as the amount and speed of calculations, but the application of AI will still take a long time.

May-Britt Moser said: "Scientific research is a process where we discover solutions, and it is up to humans ourselves to decide whether to apply them. If we don't study neuroscience, more people, including more children, may lose their lives due to diseases. If we don't do research on autonomous driving, more people may be killed in traffic accidents.

"These too are ethical issues. It is not easy for us to find an absolute balance."