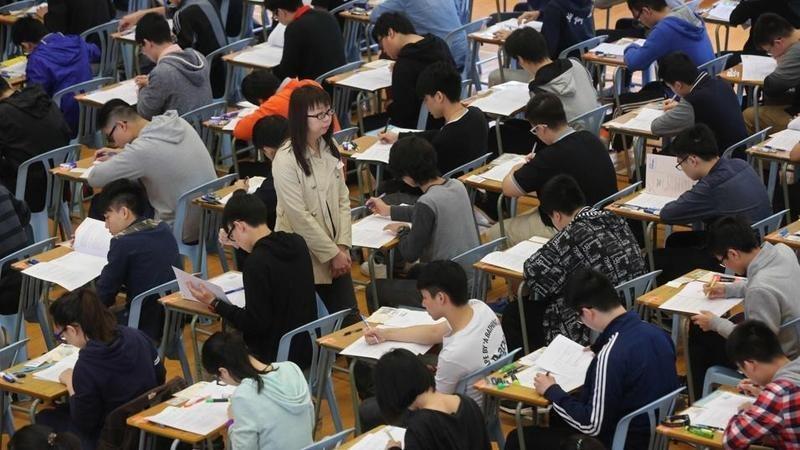 Some mainland students who have been working for years, studying to take part inHong Kong's university entrance exams, fear their efforts have been for nothing. Control of the novel coronavirus has become everything around the world. The Hong Kong government has imposed restrictions on border-crossings as early as late January.

Rainbow, a 17-year-old high school student from the mainland, is left with faint hopes that she will be able to sit the exams, scheduled to begin on March 27. She was turned away by border authorities on Monday. She agreed to be interviewed under a pseudonym.

The young woman saw dozens of other exam entrants like her who have been denied entry early this week by authorities at the Shenzhen Bay control point.

Hong Kong's Diploma of Secondary Education (DSE) exams are open to qualified, non-local students. Some mainland students aim for them, hoping that a high score will give them the key to admission to world-leading universities.

Rainbow was ready to undergo a 14-day quarantine demanded of all who cross the border from the mainland. She planned to continue her revision for the tests, and then, to be among the over 50,000 students who signed up for the exams.

The Education Bureau said this year's DSE exams would kick off as scheduled, and continue until early May, with written and oral tests.

Rainbow's visa allowed her to stay in Hong Kong for 14 days for the exams. She had hoped to extend her stay with the approval of the Hong Kong Immigration Department after her arrival. That plan went off the rails.

"I was thrown into a panic," she recalled.

Rainbow and some of her peers went to the control point again on Tuesday, hoping for a better outcome. It didn't happen. Turned away by Hong Kong immigration officers a second time, they waited at the entry point for almost eight hours until officers demanded they go, or face being barred from entering Hong Kong altogether.

Some of them cried. "I'm too anxious to sleep, because there is only this one opportunity every year," Rainbow said.

If Rainbow doesn't sit the DSE exams this year, she has only two choices -give up or try again next year.

The Security Bureau in a written reply to China Daily said visa holders of stay no longer than 14 days, the time required for the mandatory quarantine, would be refused entry.

The restriction affects all mainland DSE entrants, whose travel document would permit only a 14-day quarantine before exiting Hong Kong.

Things were different last year and the years before. Students came to Hong Kong on seven-day travel visas issued by the mainland. Students would take the exams, go to Shenzhen on the weekend, and renew their visas. This went on throughout the examination period as the exams might take over a month. That's no longer workable, now that everyone who enters from the mainland is put under mandatory quarantine.

The Education Bureau makes clear that non-local students may sit the DSE exams, but the matter of visas is not under its purview.

"If these entrants cannot attend the exams, the Hong Kong Examinations and Assessment Authority will refund their examination fees," it added.

The loss of opportunity to sit the exams would come at far greater cost than the loss of HK$3,500 ($450) examination fees.

Xie, the father of a mainland DSE entrant, said it cost him more than 200,000 yuan ($28,673) last year for a tutoring school in Shenzhen, where his daughter prepared for this year's exams, as well as for other courses and living expenses. The school offers all-day DSE exam tutorial courses and assists mainland students to take exams in Hong Kong.

"If my daughter cannot take the exams this year, all the efforts she and I made in the past 12 months, the energy and money, will have been wasted," Xie said.

Xie said he was desperate when he learned the "terrible news".

He had rented a flat for his daughter to sit out the quarantine while continuing to prepare for the exams.

His daughter, a final-year high school student, declined to sit Gaokao, the mainland's college entrance exams. Her year was spent preparing for the DSE exams.

On Monday night, Xie's daughter called, in tears, saying she was worried about the border control and feared she would miss her opportunity to sit the all-important exams.

"I can feel, clearly, she is distressed," a helpless Xie said.

Alternatives exist, but there are risks. Some students flew to countries that accept travelers from the Chinese mainland without insisting on a quarantine. Staying there for 14 days would make them qualify to enter Hong Kong without subjecting to the mandatory quarantine, as they would have not traveled to virus-hit areas, in this case, the mainland in the past 14 days.

It would make them just in time for the exams.

But rules change as fast as the coronavirus's pace around the globe.

For example, Thailand had allowed Chinese travelers to cross its borders freely until Wednesday, when it slammed the door and demanded quarantine. Some parents bought air tickets to Thailand and booked hotels for their kids. They were forced to cancel. Some students had flown to Thailand on Wednesday but were rejected in and had to book air tickets to another country.

Xie recounted that his daughter's tutoring school in February advised students to choose Thailand, Cambodia or South Korea as "an interchange" before proceeding to Hong Kong for the exams. In the intervening period, Thailand and South Korea have imposed restrictions on travelers.

South Korea is among the worst hit countries outside China, with at least 7,755 patients. Of the three, only Cambodia remains an option.

Sending his daughter to another country was Xie's last choice. "I'm worried about my daughter's health. The disease is spreading faster overseas than in China," Xie said.

"The possibility of infection on the trip is high, and you never know whether the country where you're staying will have a spike in cases in another two weeks, and when new border controls will be introduced," he added.

Barrister and lawmaker Priscilla Leung Mei-fun believes the government should consider giving a chance to mainland DSE entrants, except for those from Hubei province, the epicenter of the outbreak.

She argues that once the students with valid travel documents arrive in Hong Kong, it's at the discretion of the Immigration Department whether they can stay longer. Students should be permitted to file applications to the department to complete the exams.

After all, she said, the exams have a significant meaning to these young people's future.

Leung urged the Education Bureau and the Security Bureau to work together to find a flexible solution.

Friday brought no word that the government is seeking alternative measures to help the distressed students.

By press time, the Security Bureau had yet to reply to a China Daily inquiry about whether mainland DSE examinees' stay in Hong Kong can be extended.

Rainbow had gone to Macao on Tuesday evening. She decided to stay there two weeks before heading to Hong Kong for exams. Xie's daughter, on the other hand, boarded a flight to Phnom Penh, the capital of Cambodia, with a classmate at the last minute.

With things remaining uncertain, their future will rest on their own choices of different paths of uncertainty.