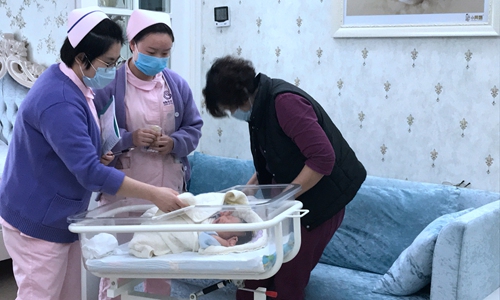 Compared with other service industries hit by the novel coronavirus (COVID-19) pandemic, the postnatal sector is expected to recover the fastest. Many employees at postnatal care centers in Wuhan, Hubei Province, told the Global Times that expecting mothers due to give birth in June should make reservations now as demand is surging.

With the spread of the pandemic, people have wondered whether there will be a "baby boom" in October. The theory is based on how couples were forced to stay home during the pandemic, which provided them with more time for intimacy.

NBA reporter Keith Smith suggested on Twitter that babies born nine months from when the pandemic started could be referred to as "Coronals." And when they grow up, they could be called "Quaranteens."

Whether a baby boom would arrive as expected requires data to explain, which might be reflected on postnatal center bookings.

Zheng Heng, general manager of Hubei Yuexi Health Management, told the Global Times that postnatal centers are generally booked and reservations are made after a woman has been pregnant for three to six months.

During the COVID-19 pandemic, most postnatal centers in Wuhan were closed while others remained partially opened. The postpartum center operated by Zheng is only one of 18 nationwide, with ten in Wuhan, making it the largest postnatal business in Central China.

According to Zheng, during the pandemic, six out of the ten centers in Wuhan remained open but did not admit new clients.

On Saturday, a blackboard in the lobby of the company's flagship store that had "January Event" written on it indicated that normal operations had been suspended following the city lockdown that was issued on January 23.

This flagship store isn't far from the Huanan Seafood Market. As the epidemic became a pandemic, there were five new mothers who couldn't return to their homes and were forced to stay at the center.

Manager Wang Yijuan told the Global Times she tried to persuade the mothers to return home early, but they thought it would be safer if they remained at the center. According to Wang, the last mother left the postpartum center on February 18.

The center reopened on April 1 and has since received seven clients. The facility offers six types of rooms in four different packages. The package prices start at 19,988 yuan ($2,842), and extend upwards of 60,000 yuan.

"We did not stop paying employee salaries. Meanwhile, we have provided employees off-duty with minimum living allowances, and the wages of those on duty have doubled from the daily rate," Zheng added.

On Saturday, Zuo Ping, a salesperson, received a couple who came to sign their contract. According to Zuo, they provided online consulting to their clients in February and March. Since business has resumed, more people have visited the maternity center to make their reservations in person. Zuo believes that there will be a buffer period after the pandemic, but the situation will improve.

Two postpartum facilities, one in Wuhan Lingjiao Lake, has sold out. Another, which bills itself as the only medical-level club that offers postpartum services, said many of their clients added the club's WeChat contact while the center was closed.

"The demand is very large," said the customer service staff. Both underscored their sterilization and security capabilities.

Zheng said it would probably take three to six months for the industry to recover, due to the ongoing regulations in Wuhan communities, and because many companies are still closed, most commercial centers have not resumed normal operations.

Compared with maternity centers, hotels will need more time to fully recover, Zheng said, given the current economic downturn and the slowdown in tourism.