Xiaoshawo village, on the banks of the Tianjin-Shandong section of the Jinghang Canal, 25 kilometers west of northern China’s Tianjin municipality, has a 300 year history of radish planting. 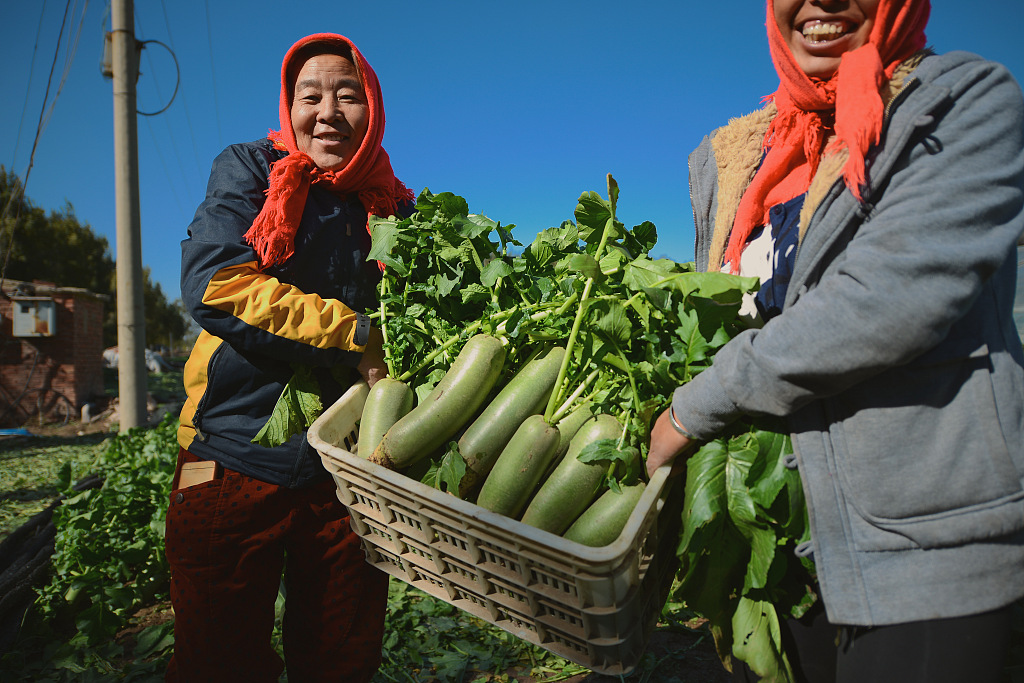 The radishes grown there are as green as jade, crunchy and juicy. Being of high medical value, the radishes have enjoyed a high reputation since ancient times. Now, they are products that are labeled boasting of their geographical origin.

With the arrival of the Spring Festival, Xiaoshawo village was once again busy with seed selection and growing seedlings.

“We are enthusiastic this year. This time last year we still had inventory, but this year we sold all the radishes during the Spring Festival, and the price also doubled,” said Feng Yuanhong, secretary of the village Party branch.

The growing and storing techniques of Xiaoshawo radishes have been listed as an intangible cultural heritage of Tianjin, and a radish cultural center has been built in Xinkou township, where Xiaoshawo village is located. In addition, nine companies have joined an incubator for agricultural scientific enterprises to promote local development.

“Xiaoshawo radishes enjoy a high reputation because of the soil they are planted in, the local irrigation water, and the diligent farmers,” said Li Zongxun, a renowned agricultural expert and technical adviser of the Shuguang Cooperative, an organization that sells Xiaoshawo radishes.

“Ecology is also contributing to the popularity of the vegetable,” Li added.

In 2010, when Li went to Hong Kong for an Asian agricultural exhibition on behalf of the cooperative, Xiaoshawo radishes were very popular among the buyers. But Li hesitated when he was about to sign agreements.

“I was not confident back then, in that the buyers wanted to visit the place of origin, but the river was black. I was afraid that would be a dealbreaker,” Li remembered.

Now however, the skies couldn’t be bluer and the water more crystalline. Thanks to the strong daylight, the radishes are also juicier. “That makes me confident,” Li said.

The popularity of the radishes benefited the founder of the Shuguang Cooperative Li Shuguang. Now, over 400 farmers are producing for the organization and sell their radishes through a unified channel.

“We sold 2.5 million kilograms this quarter, at a price of 16 yuan ($x.x0) per kilogram. Nearly 80 percent of the radishes were sold through e-commerce platforms, and we hired more than 120 people for packaging alone,” Li said.

High-quality greenhouses are a premise for standardized radish planting. Li Shufa, a farmer who has 20 years of experience in growing radishes, said it would cost nearly 100,000 yuan to replace his 1,333-square meter greenhouse with a new one.

“Our village has 133.3 hectares of land, which means we have to spend over 100 million yuan to upgrade greenhouses, roads and ditches,” noted Yu Fengjun, member of the Xiaoshawo village committee, hoping that they could get more preferential policies and subsidies from local government.

However, there are many limitations on using subsidies, and Tian Hua, deputy head of Xinkou township, gave an example. She said that if a project was granted a 500,000-yuan subsidy, the town government had to provide the same amount. Much of the expenditure was on non-agriculture activities, such as collecting bids, finding intermediary agents, and hiring designers, she noted. As a result, the town government had to deal with the subsidies in a cautious manner as they are intended for agricultural use, Tian said.

Small-scale production is an obstacle for agricultural development. According to villager Li Jianguo, he has to operate his small-scale farm machinery three times in the morning because his 2,000-square meters of cropland is separated into three parts. “With such small lots, heavy machines are not applicable,” he said.

“From my point of view, human resources are what we are short of,” said 55-year-old villager Zhang Guangxiang. He believes that the inheritance of agricultural skills is the key to the success of the Xiaoshawo radish.

“More than 300 people have gone to study in other places in recent years. We don’t have as many young laborers nowadays in the village, so we have to think of new ways to attract them back to agriculture,” he explained.

“The government is planning to build a specialty town centered on radishes to drive the economy,” Ren said.