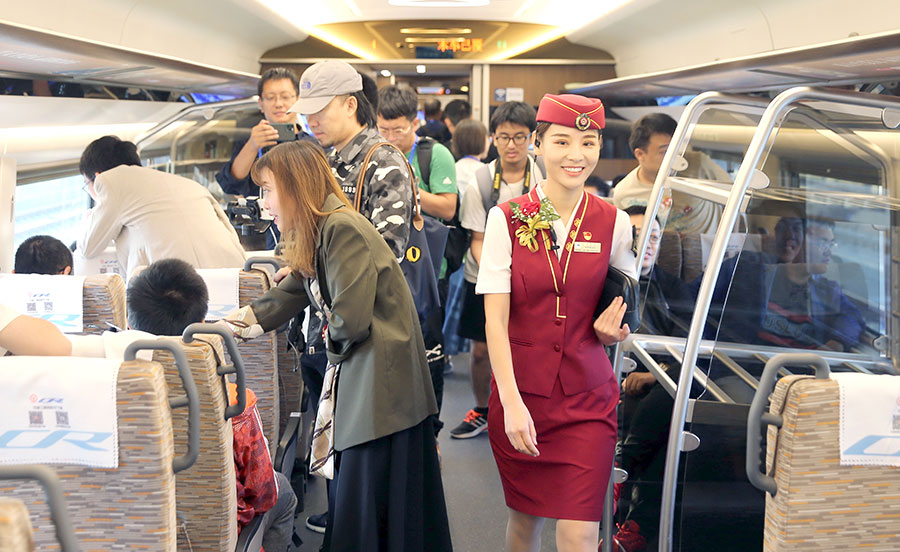 The Beijing West Railway Station-Beijing Daxing International Airport section of the intercity railway linking Beijing with Xiongan New Area was put into operation on Thursday, further boosting travel efficiency between the downtown area and the new airport, according to the country's railway operator.

The 48-kilometer line starts from Beijing West Railway Station, the busiest railway station in the capital, and ends at the Daxing airport, according to the China State Railway Group.

The first train, C2701, left at 6:56 am and stopped about 30 minutes later at Daxing airport, which went into operation on Wednesday.

The line features Fuxing bullet trains of eight carriages, which are able to carry more than 1,100 passengers, and operates 24 trains on a daily basis, according to Zhu Dianping with Beijing Railway Bureau.

"A total of 27 luggage racks, which can hold seven 28-inch suitcases, were installed on the train in line with passengers' travel needs, as well as full coverage of free Wi-Fi," she said, adding that the train has also torn down seats to make more space for luggage storage.

It costs 30 yuan ($4.30) for second-class, 48 yuan for first-class and 90 yuan for business-class at regular prices. Passengers will also enjoy discounts as much as 17 percent depending on the train's departure time.

The line also allows passengers to check in without a paper ticket along the entire rail route. It is the first line to do so in the Beijing-Tianjin-Hebei region, according to the company.

Wang Kai, 32, who works for an accounting company in Beijing, was headed to Daxing airport to catch his flight to Yantai in Shandong province. As a fan of the country's high-speed trains, he chose the rail trip.

"I had no options before but to hail a taxi or take the subway to the Beijing Capital International Airport," he said. "It's a different experience to take our wholly self-developed bullet train to the new mega-airport, both of which are among the world's best."

The e-ticket service and the special modification of the train made the trip very convenient, comfortable and time-saving, he said.

The whole intercity railway line, set to be operational by 2020, will be an important link between the urban areas of Beijing, Beijing Daxing International Airport and Xiongan New Area.