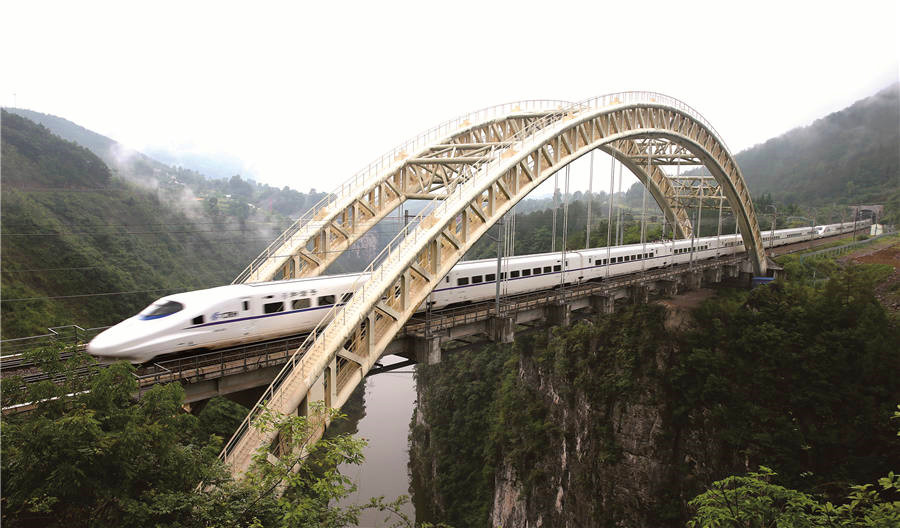 A bullet train passes through a bridge in Enshi, Central China's Hubei province on July 1, 2014. Enshi is the first autonomous prefecture in China that had access to the high-speed railway, which helped lift the region out of poverty. (Photo: China Daily)

Since 2013, the company has invested 3.3 trillion yuan ($503 billion) for railway infrastructure construction in deeply poverty stricken areas, representing about 78 percent of the company's infrastructure investment.

Also since that year, a network of 36,000 kilometers of railways connecting deeply poverty-stricken areas has been under construction, of which 20,000 km are high-speed railways. When completed, the network will reach 274 poor counties. Among them, more than 100 of those counties have been newly connected with railway services.

It will be the first high-speed railway with a designed speed of 350 kilometers per hour in the autonomous region. When the line opens, travel time between the capitals will be reduced to two and a half hours from the current time of more than five hours.

Zhou Junwei, director of the Guiyang-Nanning high-speed railway construction project, was struck by the inconvenience of the local transport network at the beginning of the project. When he and his colleagues conducted field research, it took them more than eight hours to walk 6 km to a construction site, which was in a mountainous area.

"For local people, it is so important to have a better transport network," he said, sharing his thoughts about poverty alleviation at a State Council news conference on Wednesday.

"When the line opens, it will attract more people and logistics to these mountainous areas. It will also help local people get out more easily. More businesses will be attracted to settle here and also create more employment opportunities, enabling local agricultural products to be sold across China," he said.

Zhou also said that the new line will attract tourists who can enjoy the beautiful scenery along the railway.

According to Zhou, the company built 165.5 km of roads to transport materials for railway construction and connect villages in the mountains. The project hired more than 7,000 local workers and has paid them more than 68 million yuan in salary.

Slower trains in poverty stricken areas have also fulfilled people's needs and given them a better life by taking students to school and farmers to market, for example.

To boost sales of agricultural products from poor areas, the company has sold those products on 1,396 bullet trains.