Rainbow trout can now officially be labeled as salmon in China 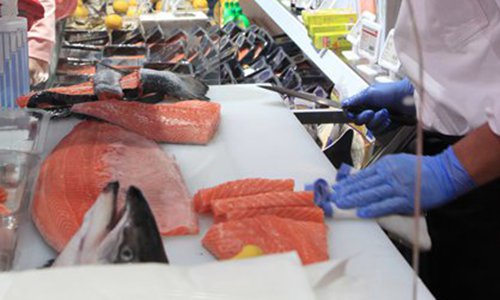 Rainbow trout can be labeled and sold as salmon, according to new rules issued by a government-run fishery organization and 13 Chinese fishery companies.

The ruling is intended to resolve complaints that China-produced rainbow trout is being mislabled as salmon, amid concerns that eating rainbow trout raw would lead to parasite infection.

The ruling says salmon is the umbrella name of salmonidae fish, and rainbow trout also belongs to this category, the China Aquatic Products Processing and Marketing Alliance (CAPPMA) said on their website.

The CAPPMA, a social organization under the Ministry of Agriculture, along with 13 fishery companies, issued the controversial standard.

The sale of salmon has been increasing in China in recent years, but a lack of standards has raised the concern of many Chinese consumers.

In May, some media reports claimed that a lot of what is sold as salmon in China is in fact rainbow trout, produced in Northwest China's Qinghai Province.

Later many netizens began to claim rainbow trout from the Qinghai-Tibetan Plateau is being mislabeled as salmon, and is infested with worms and painted to resemble salmon.

This claim was refuted by the China Fisheries Association (CFA), who said domestic rainbow trout is fed hygienically and quarantined carefully. "Whether salmon has parasites does not depend on whether it is bred in sea water or fresh water."

Because of a close resemblance, some restaurants directly label rainbow trout as salmon.

The standard issued by CAPPMA also has strict rules to control worms in salmon, and asks restaurants and companies to put a label on  fish products, so that consumers know where the fish comes from and their precise species.