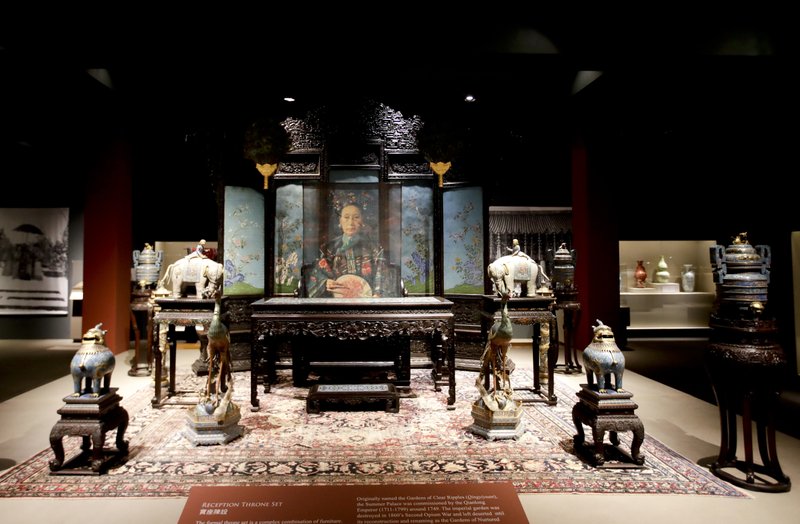 For more than a century she has been known as the woman behind the throne, the empress who through skill and circumstance rose from lowly imperial consort to iron-fisted ruler of China at a time and in a place when women were believed to have no power at all.

But it turns out Empress Dowager Cixi was much more than that. The 19th century ruler, who consolidated authority through political maneuvering that at times included incarceration and assassination, was also a serious arts patron and even an artist herself, with discerning tastes that helped set the style for traditional Asian art for more than a century.

That side of Cixi comes to the Western world for the first time with Sunday’s unveiling of “Empress Dowager, Cixi: Selections From the Summer Palace” at the Bowers Museum in Santa Ana. The wide-ranging collection, never before seen outside China, will remain at the Southern California museum through March 11 before returning to Beijing. 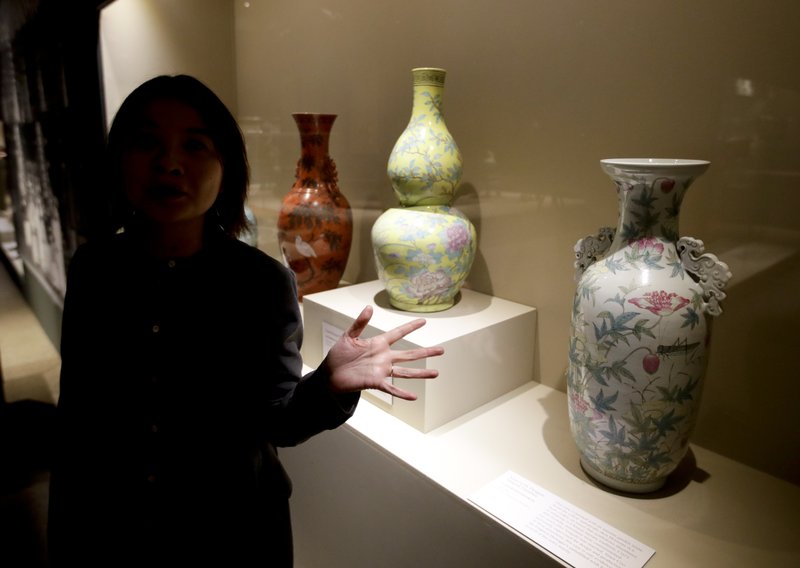 Consisting of more than 100 pieces from the lavish Beijing palace Cixi called home during the final years of her life, “Empress Dowager” includes numerous examples of intricately designed Chinese furniture, porcelain vases and stone carvings, as well as several pieces of Western art, rare in China at the time, that she also collected. Among them are a large oil-on-canvas portrait of herself she commissioned the prominent Dutch artist Hubert Vos to create.

Other Western accoutrements include gifts from visiting dignitaries, among them British silver serving sets, German and Swiss clocks, a marble-topped table from Italy with inlaid stones in the shape of a chessboard and even an American-built luxury automobile. The latter, a 1901 Duryea touring car, is believed to be the first automobile imported into China and as such may have involved the empress in the country’s first automobile accident when her driver is said to have hit a pedestrian. 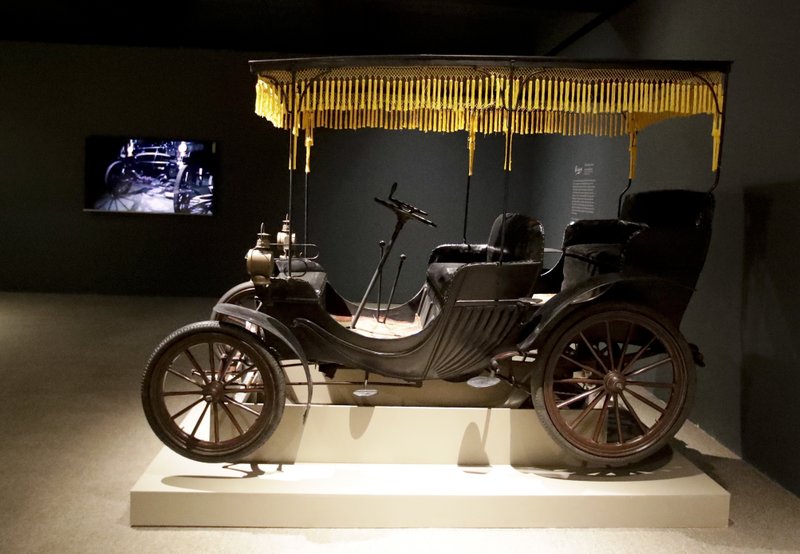 “We already have a lot of scholarship on who she is and how she ruled China. But this show brings you a different angle,” said exhibition curator Ying-Chen Peng, as she led a recent pre-opening tour of it through the museum that was kicked off by a raucous performance of Chinese lion dancers accompanied by musicians loudly banging gongs cymbals and drums.

“This exhibition seeks to introduce you to this woman as an arts patron, as an architect, as a designer,” the American University art historian said. 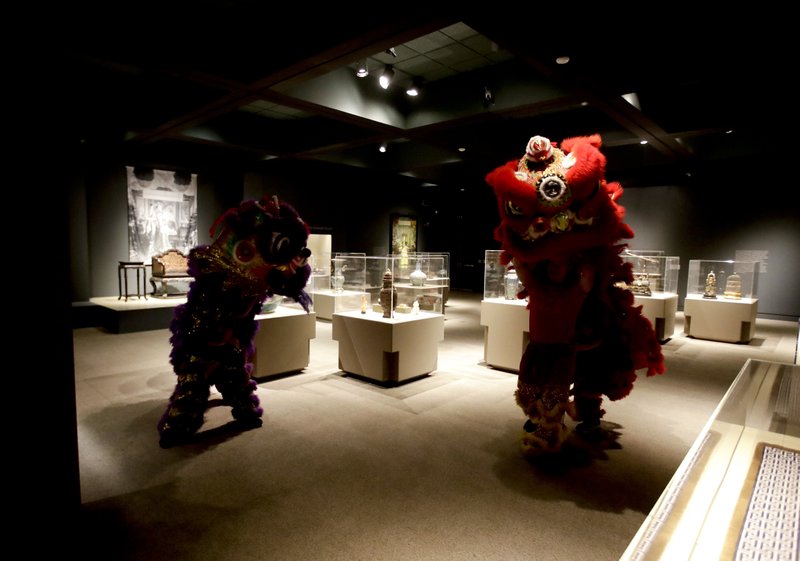 That’s an approach that may finally have gotten it to the Western world. Anne Shih, who chairs the museum’s board of directors, noted recently that she spent 10 years trying to persuade the Chinese government to lend Cixi’s art.

The Bowers has built an impressive international reputation over the years by hosting exhibitions of priceless, historical, often larger-than-life artworks from Tibet, the Silk Road, the tomb of China’s first emperor and other historic sites.

However, Shih says the Chinese government initially turned her down repeatedly. Officials told her the empress, who outlived two much younger emperors, including one who died mysteriously of arsenic poisoning, was just too controversial. She’s been portrayed in numerous films and books and not always positively. 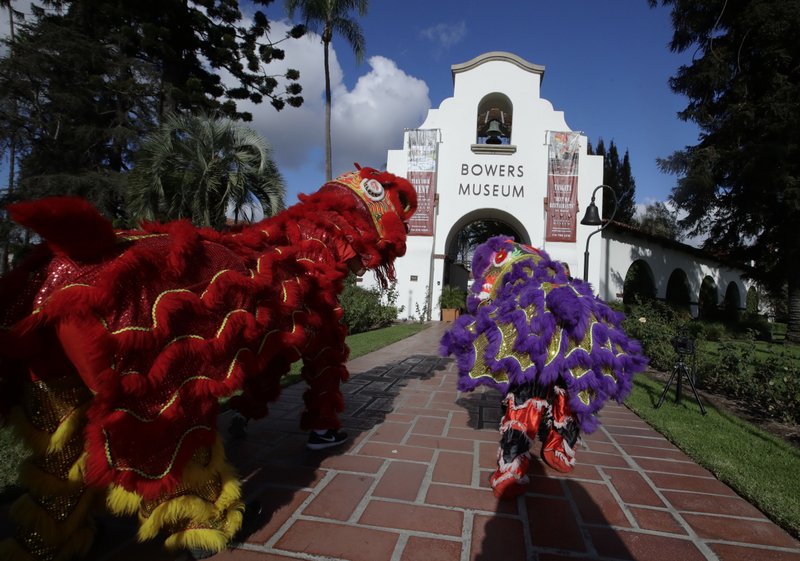 Shih finally prevailed, however, when she emphasized this show would focus on art, not politics.

Although it does, it still becomes apparent to visitors what a formidable presence Cixi must have been as they enter a recreation of her throne room to be greeted by a larger-than-life portrait of her covered in jewels and razor-sharp fingernail protectors as she glares ominously at her audience.

Nearby, however, are objects that quickly make her passion for art clear. Prominent among them is a towering calligraphy work of black ink embossed on a sheet of paper that, stretching to about 6 feet (2 meters), is taller than the dowager was. She is said to have made it by wielding a large heavy brush while standing on a stool as some of the eunuchs who served her stretched out the paper. 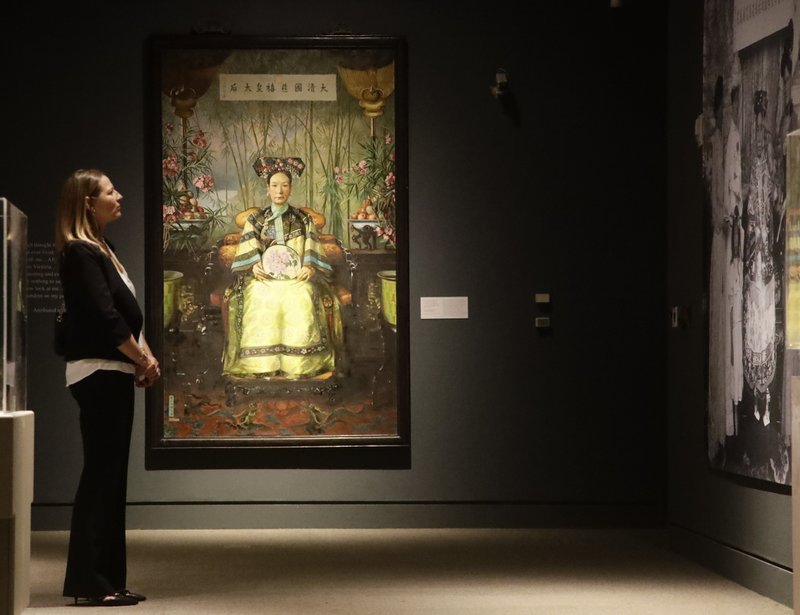 Not far away are ink-and-paper drawings of flowers the empress also created, although Peng notes with a laugh that when it came to painting, Cixi was a much better calligrapher.

Placed into the emperor’s harem as a low-level teenage consort, she quickly elevated her status by giving birth to his only son in 1856. When the emperor died six years later she installed the boy as his successor and, as the woman behind the throne, ousted opponents, brought in loyalists and ran the country herself for the next 43 years. She died in 1908 at age 72.

Although she led her country through numerous wars launched by foreign invaders during those years, she also found time to visit with dignitaries from other countries and to pursue her own passion for art.

Her real artistic skill, however, lay not in making art but in envisioning works that would stand the critical test of time and then finding skilled artisans to create them.

“Her personal preference actually led to the further development of these very ornate designs,” Peng said, observing some of the intricately carved, gold-inlaid furniture and hand-painted porcelain objects. “Nowadays when you go to antique shops, you can see quite a few pieces in this style. You can say she was a trendsetter.”