Rare child hospice tries to give comfort to patients and parents 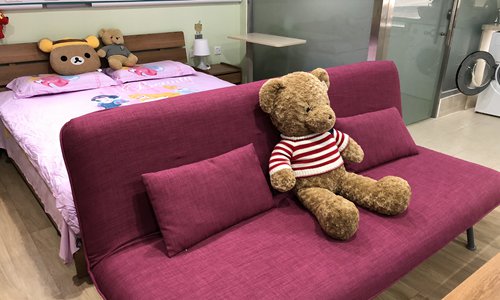 Ten-year-old Taotao died on June 22, 110 days after he checked in to Chuju Zhijia (Home of Daisy), Beijing's first and only hospice for children with cancer.

The boy had suffered from neuroblastoma, one of the most common childhood cancers. Before his death, Taotao made his mother a golden ring with a snack package. "The mother said that the ring was a token her son gave to her so that he could recognize her when she goes to the other side," Cao Ying, who is in charge of the ward in Chuju Zhijia, told the Global Times.

Zhou Xuan, a founder of the hospice, who is also a chief physician at the hematological oncology department of Beijing Children's Hospital, told the Global Times that after seeing the pain these terminally ill children go through before death, she wanted to do something to ease it.

Jointly established by the New Sunshine Charity Foundation and Beijing's Song Tang Hospice on October 31, 2017, Chuju Zhijia occupies three wards on the second floor of a building in the hospice.

The wards previously contained eight beds, but have now been adapted into a home-like ward with two rooms. Through a white door is a living area with kitchen equipment and a dining table. In the bedroom, light green walls, a king-sized bed and cartoon decorations turn the ward into a warm and cozy space.

"We want to give these children a warm memory at the end of their lives," Zhou said. "Most children in the late stages of cancer have serious symptoms of different types, and they tend to suffer a lot and die in great pain after being discharged from hospital and are without access to medical support. Their parents also suffer because they are unable to do anything to help."

"Those children who die in ICUs were so lonely when they left the world without relatives around, which also hurts the parents a lot," Zhou told the Global Times.

Chuju Zhijia aims to provide a ward with a home environment. The king-sized bed is designed for parents and children, and a well-equipped kitchen allows parents to cook the children's favorite food, Zhou explained.

At the Song Tang Hospice, medical workers are on 24-hour standby, and volunteers come every day to play with the children.

Accommodation fees are paid by New Sunshine Charity Foundation Pediatric Palliative Care Special Fund, and families that have checked in only pay medical expenses. As children in hospice care do not require a great deal of examination and treatment, and Song Tang charges less than other hospitals, parents don't need to pay much in Chuju Zhijia, Zhou said.

A professional medical team is the most important part of the operation. Chuju Zhijia currently has a 19-member medical team, and most of them are doctors and nurses from children's hospitals.

After medical care, the most important aspect of Chuju Zhijia is the spiritual care.

"The priority is to control the symptoms, which have the biggest impact on their lives," Zhou said.

For most children in Chuju Zhijia, the priority is pain relief. "As long as the children feel comfortable, parents will feel better," she said.

"Comforting families is the most difficult part," Zhou told the Global Times. "We are trying to minimize the pain of losing their children."

Zhou said that there is no formula to follow in terms of how to ease the suffering of the devastated parents.

"They go through very complex emotions such as sadness, anger and fear when they see their children in such pain," Zhou told the Global Times. "Some families fall apart after their child's death."

Experienced and licensed social workers are available to provide families psychological support to relieve their grief as much as possible or help them get through this devastating period with some peace of mind.

"The key is constant communication (with the families)," Zhou explained. When facing a child's death, most parents also feel regret that they have failed the child and ask themselves if there was anything they could have done to keep their child alive. Some parents simply refuse to accept the reality that their child is dying.

"We will tell them the truth on the premise of controlling their child's pain and tell them that whatever you do to make your child comfortable is the right thing to do," said Zhou. "They will eventually accept the reality when they see their child is weak, in peace, and free from pain."

When the child has just a day or two left to live, parents can even talk calmly about what clothes and memorial they will prepare.

Zhou believes that hospice service levels are directly connected to social, economic and medical development. "I think it's the overall development of a society that allows people to pay more attention to their dignity."

There are a large number of children with late period tumor who urgently require hospice services, but the reality is that China has underdeveloped children hospice services and related resources.

In China, approximately 30,000 to 40,000 children are diagnosed with cancer every year, most commonly leukaemia, lymphadenoma and solid tumors. Fortunately, 80 percent of children with leukaemia can be cured thanks to medical advances. However, the 20 percent who cannot be cured still face a large shortfall in children hospice resources in China, Zhou said.

In large and public hospitals, it is hard to spare even a small amount of medical resources for patients without hope of a cure, as critically scarce resources need to be distributed to treat patients with a greater chance of survival. The situation is even more critical in children's hospitals, as clinics and wards are crowded with patients all year round, according to Zhou.

Zhou is planning to add more wards to Chuju Zhijia, giving more sick children a respite from their suffering at the end of their lives.