Rare dinosaur footprints have been discovered in East China, documenting the movements in the region over 100 million years ago of the largest animals ever known to walk the Earth, Chinese and US paleontologists revealed on Tuesday. 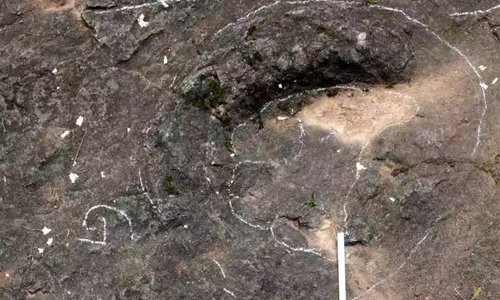 Picture shows the footprints of dinosaurs dating back to 100 million years ago. They were discovered in Baxiangang, a village in Lanxi, East China's Zhejiang Province, Chinese and US paleontologists revealed on October 8. (Photo: Courtesy of Xing Lida)

More than 20 footprints of different sizes were found at the site, the largest 82 centimeters and the smallest 22.7 centimeters, according to a statement sent to the Global Times by Xing Lida, a dinosaur footprint expert at the Beijing-based China University of Geosciences and a leading member of the research team that discovered the site.

Located in Baxiangang, a village in Lanxi, East China's Zhejiang Province, the site has significant meaning in researching the distribution and evolution of dinosaurs in the mid-Cretaceous period, about 100 million years ago, in China, Xing said.

The research team and authorities are planning to protect the site and conduct further research, the statement said.

All the footprints were left by sauropods, which had a height of between 3.8 and 14 meters, Xing said.

Sauropods are the largest known animals to have ever existed on the land. They have long necks to reach food like leaves on the top of trees that other dinosaurs could not get, like giraffes of today. Since they were so heavy, they usually walked on four legs.

"This discovery shows that many sauropods populated the Lanxi area 100 million years ago, as it could be an area gifted with water and plants," Xing said.

Another leading member of the research team, Martin Lockley of the University of Colorado, said in the statement that the footprints clearly show the toes of the dinosaurs, indicating the toes were very strong and could help dinosaurs grab the ground.

Local folklore led the paleontologists to the discovery: The footprints were said to be left by the Eight Immortals of Chinese mythology.

Resident Chen Yongqian was inspired by the discovery of dinosaur footprints in Southwest China's Guizhou Province earlier this year and guessed the footprints in Baxiangang might also be dinosaurs'. Chen reached out to Xing, a famous science influencer on China's Twitter-like Sina Weibo.

Much folklore in China has proved connected to dinosaur footprints, including the "Big Footprint" found in a cliff in Qamdo, Southwest China's Tibet Autonomous Region, in 1999, which residents used to think was left by a god, Chen Yu, a paleontologist at Beijing's Capital Museum, said in the statement.