Rare French book handed over to National Library of China 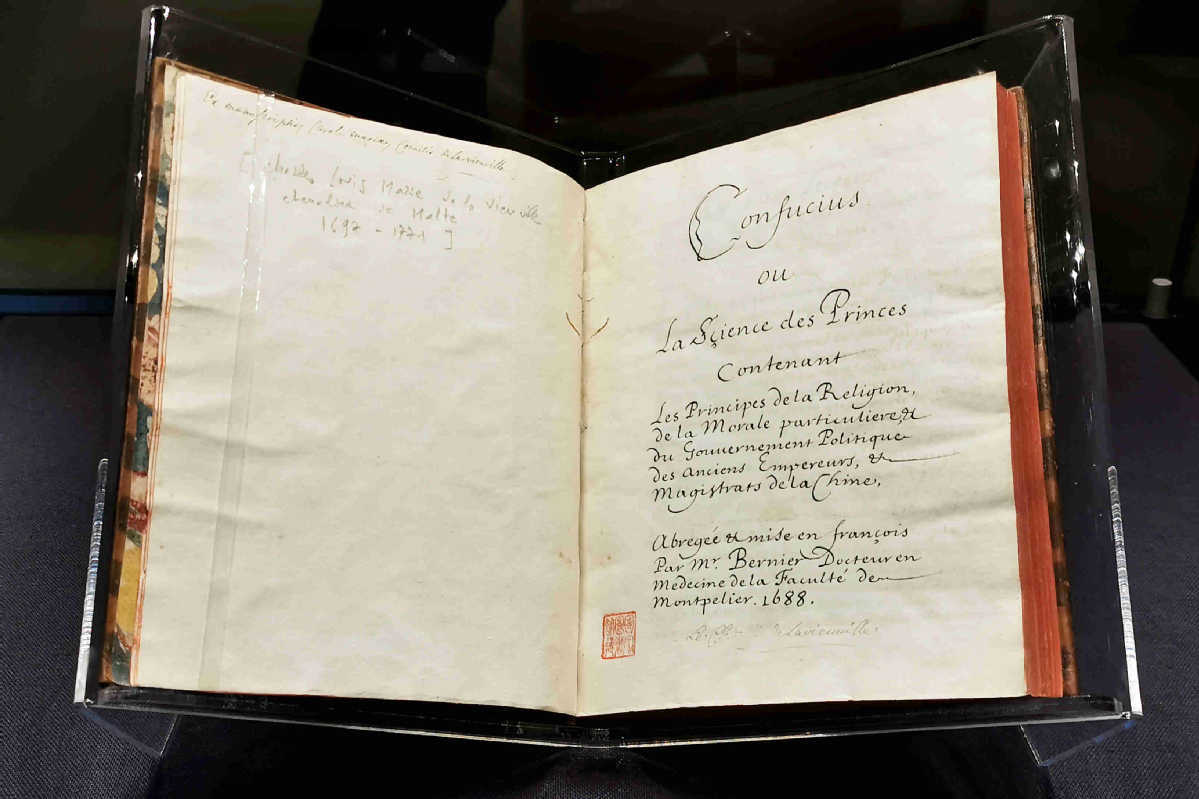 A rare 17th-century French book on Confucius, which was given as a national gift to President Xi Jinping by French President Emmanuel Macron last year, was officially handed over to the National Library of China in Beijing on Wednesday. (Photo: China Daily)

A rare 17th-century French book on Confucius, which was given as a national gift to President Xi Jinping by French President Emmanuel Macron last year, was officially handed over to the National Library of China in Beijing on Wednesday.

Confucius ou la Science des Princes (Confucius, or the Science of the Princes), which was handwritten by the French explorer and physician Francois Bernier in 1688, was the earliest known French-language book introducing the ancient Chinese philosopher and educator Confucius (551-479 BC), according to Rao Quan, director of the library.

It is also the first European manuscript from the Age of Enlightenment to be included in the library's collection, he said.

In March 2019, during President Xi's state visit to France, Macron presented the book before their meeting in Nice, and said that translations of Confucius' works in France had enlightened philosophers such as Montesquieu and Voltaire.

Recognizing its rarity and importance, Xi said it would be taken back to China and put in the collection of the National Library of China.

The 206-page book, which has an exquisite cowhide cover, contains translations of The Analects, The Doctrine of the Mean and The Great Learning, the three main Confucian classics, as well as some annotations.

"The author hoped that young rulers and nobles in Europe could learn from ancient China and it would enhance their morals and political wisdom," Rao said.

In 1687, a printed version of the Latin book Confucius Sinarum Philosophus (Chinese Philosopher Confucius) was edited by the Belgian priest Philippe Couplet and published in Paris.

It was the first systematic introduction to Confucianism in Europe, according to Zhao Daying, a researcher at the library. One such copy is already in the library's collection.

Bernier translated the Latin book into French almost verbatim, but he cut some annotations on history.

"Bernier never came to China, but he lived in India for a long time," Zhao said. "He therefore had a broad view on cultural differences and promoted communications between the East and West."

That probably explained why he was eager to translate the Latin book into French only months after its publication.

Two shorter versions of copied manuscripts of Bernier's book from that time are now housed in the Arsenal Library in Paris.

However, their existence was long neglected by the public as the book was not printed, and Bernier died shortly after he wrote it. Before being presented as a national gift last year, Confucius ou la Science des Princes was in a private collection for a long time, Zhao said.

"China, where Confucius was born, is the best home for this book," Laurent Bili, French ambassador to China, said at Wednesday's ceremony in the library. "The high value of this first French translation of Confucianism is immeasurable."

Rao, the library's director, said further studies centering on the book will follow to explore its meaning, as well as dialogues and mutual understanding among different civilizations.

The book is planned to be on display to the public at the National Library of China until Dec 6, together with Confucius Sinarum Philosophus and other copies of early European books about ancient Chinese philosophy.