CHINA Rebirth of Asia's once largest open-pit mine

Rebirth of Asia's once largest open-pit mine 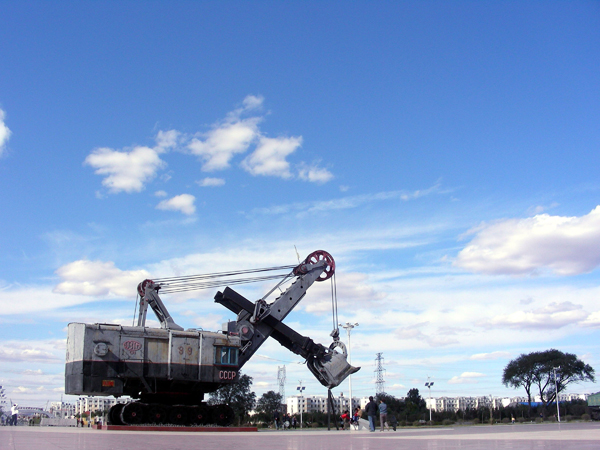 An excavator on display at the Haizhou Coal Mine in Fuxin, Liaoning province. (Photo: China Daily)

SHENYANG, May 13 (Xinhua) -- The glory days are gone for the once-bustling Haizhou coal mine that used to be the largest of its kind in Asia located in the northeastern Chinese city of Fuxin.

Nowadays, all that is left is a giant mine pit that is nearly 4 km long, 2 km wide and over 300 meters deep.

Over the past decade or so after the mine was closed, problems have continued to plague Fuxin as the resource-depleted city urgently seeks to restructure.

The sheer size of the pit makes it easy to imagine it being the first and largest open-pit mechanized mine after the founding of the People's Republic of China.

On January 1, 1951, the construction of the mine began and six months later, the ambitious project had been put into operation with a designated annual output of 3 million tons, quite a landmark project after China began to beef up its industrial sector.

"Scenes back then were spectacular," said Min Shibiao, a previous chief truck driver at the mine.

"During the peak days, more than 20 electric picks were working in the pit at the same time, along with over 7,000 workers busy on the front-lines," Min said.

In 1988, Min Shibiao, a then fresh graduate from a coal mine technical school in Fuxin, was assigned to work at the Haizhou coal mine.

"I was too thrilled to fall asleep the day I received the news," said Min. "It was a great honor for people to work for the mine."

As China pushes ahead with its ambitious economic plan, the Haizhou mine had made a substantial contribution. During its mining history of more than half a century, it has produced 244 million tones of coal and paid 3.345 billion yuan in profits and taxes.

On May 31, 2005, the coal mine with a total area equivalent to the size of 38 Palace Museums, was officially closed, followed by over a decade-long treatment for geological hazards.

"Villagers who lived in the areas surrounding the mine were a force to relocate as the pit expanded," said Bai Fengqin, a resident of the Taiping District where the pit is located.

"Once it rained, residents had faced the risk of landslides," Bai said. "Windows must be firmly closed during windy days. Otherwise, there would be a layer of dust and ashes in the rooms."

"Both the surface and underground techniques adopted in the Haizhou mine have led to many geological environmental difficulties such as depressions, landslides and outbreaks of fire," said Liu Yang with the city's bureau of natural resources.

"We prevent landslides and ground fissures, considered most likely to occur, by cutting slopes and backfilling, and a series of measures were taken to stabilize the soil," said Dai Xiaodong, an official with the local government.

"Dozens of tree species were planted and failed to grow due to the polluted earth, but the ones that survived, mostly drought-tolerant and adaptable trees, gradually took root by the thousands in the barren land," Dai said.

Experts believe that it is a daunting task to deal with mine pits, and Dai said discussions and research have continued for a long-term campaign.

The mine pit along with a vast observation deck and a nearby theme park displaying obsolete coal train carriages have become popular tourist destinations in the city, gathering locals and nostalgic visitors who are willing to take a glimpse into the blazing history of the mine.

"A total of 7.19 square km of land in the mine area are still left unmanageable, so we have a long way to go," said Han Jinlong, vice director of the city's bureau of natural resources.