CHINA Reckoning of developed nations' luxury emissions - As extreme weathers hit many parts of the world, some attempt to dump blame on China

Reckoning of developed nations' luxury emissions - As extreme weathers hit many parts of the world, some attempt to dump blame on China 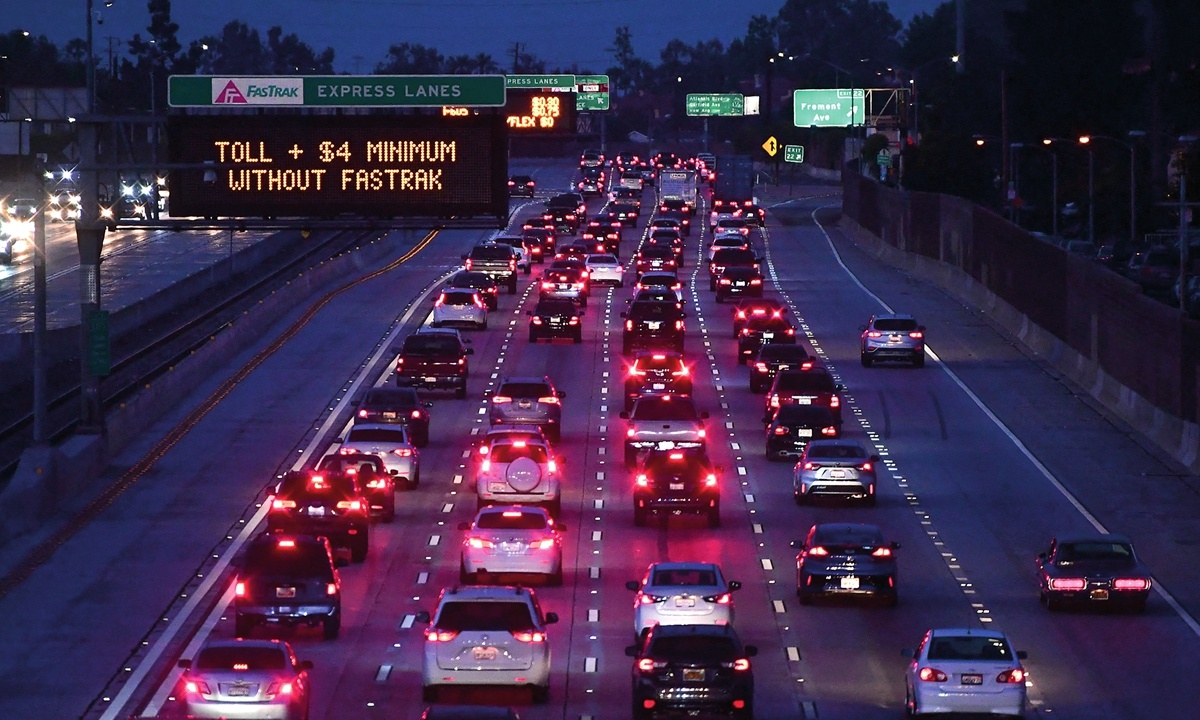 Brakelights come on as vehicles head out of Los Angeles on the Interstate 10 freeway on May 27. (Photo: AFP)

Torrential rain in Central China's Henan Province, typhoon In-fa on the East China Sea, deadly floods in Europe, heatwaves in North America, and severe sandstorms in Mongolia... The world has witnessed plenty of instances of extreme weather in 2021. Mother Nature has warned human kind time and again, in her own ways, that man and nature coexist in the same ecosystem, and that mankind must respect and protect nature, and follow its laws.

In September 2020, China took the initiative to pledge that it will strive to cut carbon dioxide emissions after 2030 and achieve carbon neutrality before 2060, otherwise known as the "3060" target. Following China's announcement, many other countries updated their emission reduction targets with a view to better tackle the climate issue.

However, those with ill intents still claim that China's "3060" target is not ambitious enough, sensationalizing the notion that "China is the largest greenhouse gas emitter" in a bid to negate China's emission reduction efforts.

It is the lavish lifestyle of Western countries that has mainly contributed to massive carbon emissions. Perhaps it's time for the reckoning of their luxury emissions, which are the extra carbon emission generated from luxuries, distinguishable from essential needs.

According to a study by China International Capital Corp, in 2017, household carbon emissions accounted for 60-80 percent of the total emissions in wealthy developed countries. Meanwhile the figure in China is 40 percent, which is only half of the US.

In terms of electricity consumption, industrial production contributed to more than 70 percent of the total power consumption in China, while in the US the figure was less than 30 percent. Per capita, the electricity consumption of US households in 2019 was six times higher than that of Chinese households. According to an article published in 2020 on the Journal of Cleaner Production, a renowned journal on environmental science, per capita, the carbon footprint of the US is 18.1 tons, which is conspicuously higher than the global average of about 5 tons.

These numbers shed light on the high carbon lifestyle of developed countries, particularly the US, which values living in luxury over reducing their emissions for the greater good.

When torrential rain, wildfires hit Mother Earth as a result of climate change, Western countries still use the blame game on China rather than focusing on changing their domestic lavish lifestyles, which are a major contributor to the world’s massive carbon emissions. (Graphic: Global Times)

If food waste was a country, it would be the third largest greenhouse gas emitter in the world, said a United Nations report in 2013.

Its no wonder that many wealthy Western countries like France, Germany, the UK and the US were among the world's top 10 producers of food waste, according to statistics from the UN Food and Agriculture Organization. 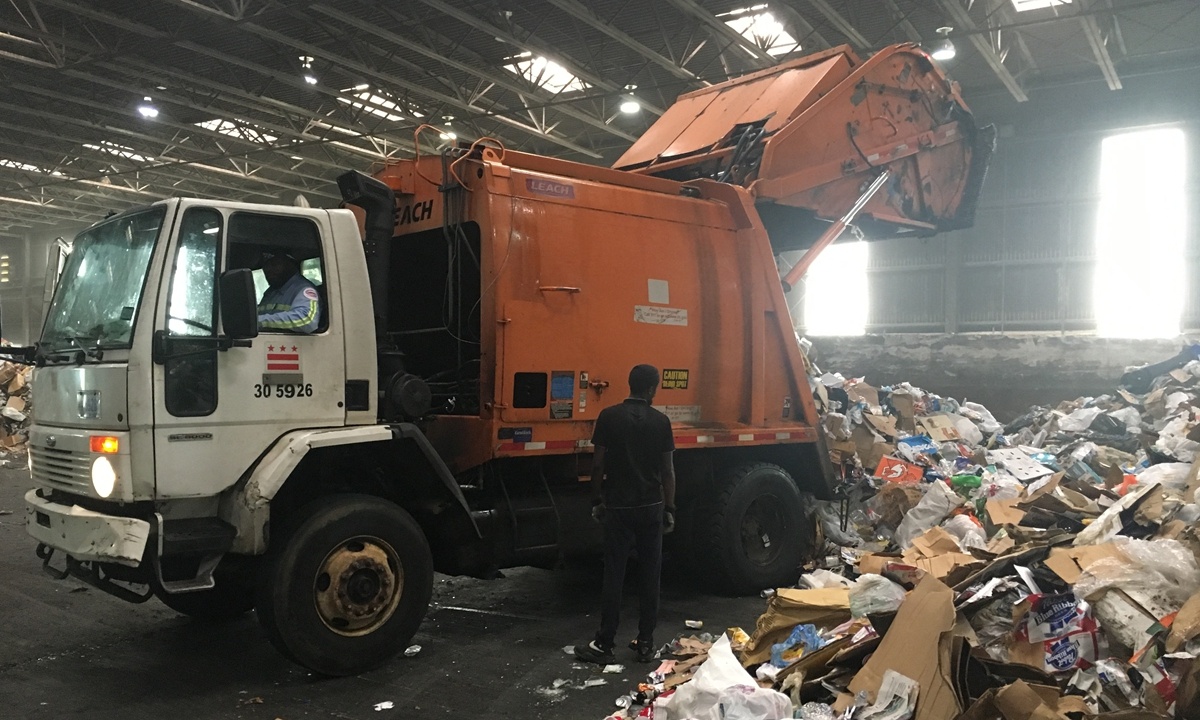 Trucks deliver trash at a transfer dtation in Washington DC, the US on July 10, 2018. (Photo: AFP)

The meat-heavy diet of the Westerners leaves a high carbon footprint. Livestock produce gases like methane, and meat consumption creates much more carbon emissions than eating vegetables or fruits.

As a 2020 study by the University of Michigan's Center for Sustainable Systems shows, in Western countries like the US, meat is the largest contributor (56.6 percent) of carbon emissions of an average meal. In contrast, meat only accounts for 36.6 percent of the carbon footprint of an average Chinese meal, according to Beijing Review due to a tendency to consume rice as the staple food.

Clearly, the Western media's narrative that the Chinese consumption of meat is the main culprit for climate change goes against evidence.

The US boasts its large territory and low population density. While Americans enjoy the abundance of land, they have also squandered vast amounts of resources.

According to the US Census Bureau, the average living space per person for new single-family US houses surpassed 98 square meters in 2015. Plus, many Americans are used to keeping their air conditioners on 24/7. The bigger their houses, the more air conditioning they need, hence more waste of energy. At the same time, high-carbon household appliances such as coffee machines, ovens, dish washers and dryers are must-haves for lots of American families.

According to the American Association of Home Appliance Manufacturers, an ordinary dryer in a US household consumes 1,079 kilowatt-hours of electricity annually. This alone is equivalent to the annual power consumption of an average Chinese family.

US' transportation emissions are strikingly high

The US is a nation on wheels. Traditional models of vehicles like American muscle cars and pick-up trucks, which are famous for their powerful engines and high fuel consumption, are popular in the US. Meanwhile, Chinese roads are increasingly filled with electric vehicles.

Car ownership statistics show that in 2019, Americans have 0.8 vehicles per person, four times higher than that of Chinese. In 2016, 21 percent of American households owned three or more cars, while only 9 percent didn't have access to a vehicle.

Moreover, the US public transit is troubled by obsolete facilities and few users. It may be surprising in the the US, the No. 1 developed country in the world, that the majority of regional public transit systems are underdeveloped. Issues like the lack of bus stops, long intervals between departure times and safety risks are common.

As a study by the Cato Institute underscores, the nationwide public transit ridership in the US has declined since 2014 and only 5 percent of American passengers now choose public transit to travel. Less than 3 percent of the US population in the 50 largest urban areas commute to work via public transit. Poor public services have pushed more Americans to drive themselves, which leaves a larger carbon footprint behind.

Western playbook all too familiar

Though Western countries live larger carbon footprint lives, they dictate the standards of the carbon footprint and can therefore still control the narrative. The West has played a dominant role in formulating the existing emissions calculation system. This system has yet to provide an effective calculation of luxury emissions, and indirectly allows for a grey area where anti-China powers make false allegations against China.

It's easy to see that the lifestyle of the Chinese people is much more environmentally friendly than developed nations like the US. 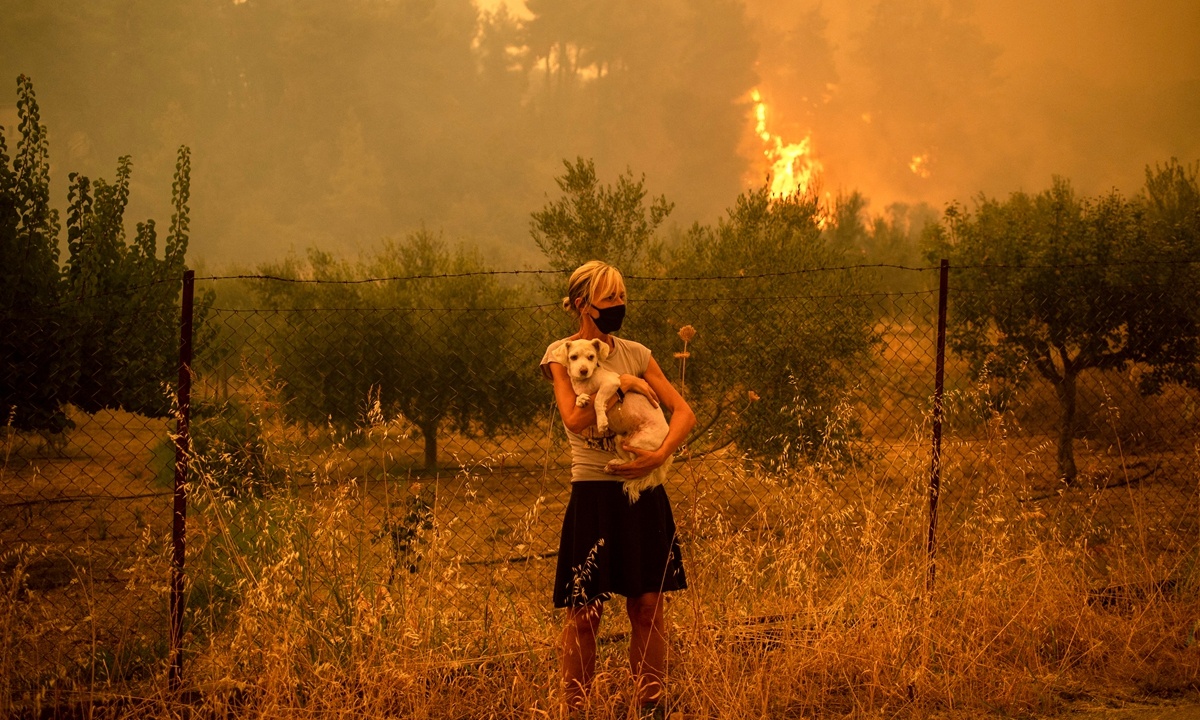 A woman holds a dog in her arms as forest fires approach the village of Pefki on Evia island, Greece on August 8. Greece and Turkey have been battling devastating fires for nearly two weeks as the region suffered its worst heatwave in decades, which experts have linked to climate change. (Photo: AFP)

A recent article by a German climate expert, Uta Steinwehr, also points out that the per capita carbon dioxide emissions of China is 7.1 tons, which ranks 48th in the world and is much lower than Western countries. Even though the US obsessively blames China, the American per capita emissions is 16 tons, which is twice China's number and then some.

There is no denying that China's carbon emissions have risen in recent years, but this increase came from a quickly developing manufacturing sector. This is an inevitable component of rapid economic development and a by-product of being the world's factory.

At the same time, a higher quality of life for 1.4 billion people naturally means some increase in carbon emissions. As people in the West love to say, if everyone is equal before God, Chinese people are also entitled to a decent life.

With a first-mover advantage in the Industrial Revolution, leading Western powers achieved modernization within a short period of time. However, this achievement came at the expense of severe damages to the global environment and emissions that catalyzed climate change. Now, these countries suddenly have a conscience and lecture the developing world to produce less carbon emissions. In reality, this is an attempt to cling to their privileges by curbing the development of other countries.

The Western playbook is all too familiar: Act recklessly with no regard for the consequences, then apologize and make up for the mess. Surely, China will not follow this old trick because China knows that clean waters and lush mountains are invaluable assets. More importantly, China has long championed fairness and justice in climate change, particularly the principle of shared but differentiated responsibilities. China has firmly stood for the development interests of developing countries.

Announcing the ambitious "3060" target means China, a developing country with 1.4 billion people, is determined to complete a mission in just three decades what would take developed nations 50 to 60 years. It speaks volumes about the conviction and responsibility of China.

As a verse from Chairman Mao Zedong's poem goes, "In a peaceful world, young and old share alike warmth and cold." To foster a community of life for man and nature, solidarity and cooperation are the only choice. At this critical juncture, if the West still makes climate action into a card in geopolitical games, a tool to attack other countries, or an excuse to raise trade barriers, then it's time for a reckoning in history of not only this old blame game but also these new luxury emissions.