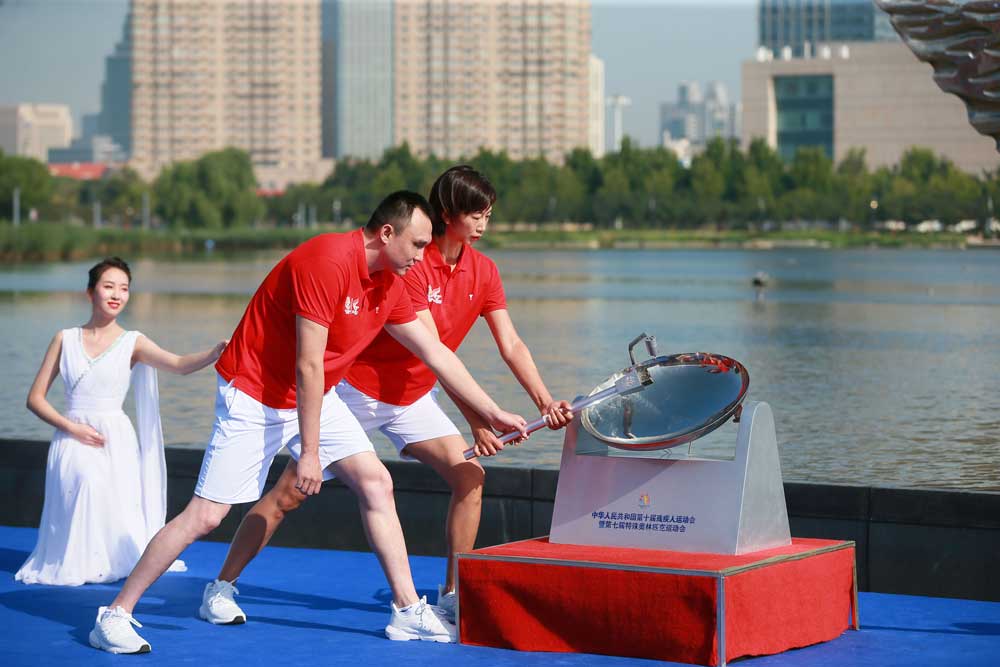 The flame for the 10th National Games of Disabled Persons and the seventh Special Olympics is ignited on Aug 18 in Tianjin. A torch relay will last from Aug 18 through Aug 25 in this coastal city. (Photo: China Daily)

Two songs－You Can, I Can and Big Sky, sung by local hearing-impaired children－kicked off the opening ceremony of China's 10th National Games for People with Disabilities and the 7th National Special Olympics Games in the northern city of Tianjin on Sunday.

A total of 3,481 disabled athletes－a record high－representing 35 teams from across the country will compete in 43 sports, with the first gold medal to be contested in the swimming pool.

"The twin sports events mark several firsts in the history of sports galas for people with disabilities and the Special Olympics in China," said Cao Xiaohong, vice-mayor of Tianjin and deputy director of the organizing committee for the two events.

It is the first time winter sports like curling and ice hockey will be contested at the games. In addition, for the first time earlier this year, some events were opened to participation from community athletes.

Wang Meimei, deputy director-general of the China Disabled Persons' Federation and deputy director of the events' organizing committee, said 11,348 people with disabilities had joined the community sections, "boosting their happiness from sports and their enthusiasm in rehabilitation".

Majid Rashed, president of the Asian Paralympic Committee, spoke highly of the efforts China has made to develop sports for people with disabilities.

"China has made great achievements in the field due to its clear goals, strategic planning and hard work," he said.

Zhao Sujing, head of the federation's sports department, said the events provided great opportunities for athletes to prepare for the 2020 Paralympic Games in Tokyo and the 2022 Beijing Winter Olympic and Paralympic Games.

"China has topped the gold medal tally and total medal tally at Paralympic Games four times, but the upcoming events next year in Tokyo are expected to see tougher competition," she said.

Cao said Tianjin was ready to assist all the athletes at the games.

Cao Zhenhua, a gate ball athlete, said she was surprised that the organizing committee held a birthday party for her 22nd birthday on Saturday, upon her arrival in Tianjin.

"The sports give us (people with disabilities) confidence in life and the unexpected birthday party was a warm blessing for me," she said.

The host city is also making efforts to be more accessible.

Some 500 new buses equipped with facilities for people with disabilities have been put into service by the government, and local service providers like subway staff and bus drivers have learned sign language to help people in need.

Starting from this month, the Tianjin Metro App has been offering facial recognition access to local people with disabilities. They can travel on subway trains free of charge after they register online.

An app known as Rongchang was also launched this month to help people with disabilities check barrier-free facilities in public areas and plan routes.