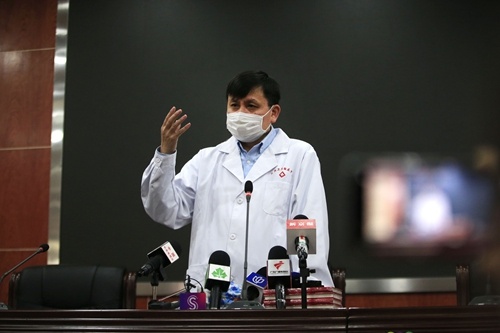 Doctor Zhang Wenhong dismisses concern that recovered COVID-19 patients who test positive again might transmit the infection to others, at a press conference held in Shanghai on Saturday. (Photo: Global Times)

Despite some cases of recovered patients testing positive again for COVID-19, a top expert in Shanghai brushed off the concerns saying there has been no case reported that confirms such patients would transmit the virus to others.

"Based on the national data, no case has been reported that confirms the coronavirus patients who test positive after recovery are infectious," Zhang Weihong, head of the Shanghai COVID-19 medical expert team, told a press conference in Shanghai on Saturday

There are two possibilities that result in some recovered patients testing negative twice initially but positive after discharge from hospital: one is the sample is taken from patients' laryngeal part of pharynx while the patient is at a low viral load at the critical point, and the other possibility is the sample quality is not good, said Zhang.

Shanghai has made advance plans to extract further samples within two weeks from those recovered patients testing negative for the nucleic acid diagnosis, Zhang said.

Those recovered patients testing positive again will be isolated and kept under medical observation for another 14-days, Zhang said.

"It's still hard to say whether the recovered patients will have further syndromes but I care more about how to solve the problem," noted Zhang.

It's unnecessary to worry about whether the testing is positive or negative, but we do need to be cautious about whether those recovered patients testing positive are infectious, noted Zhang.