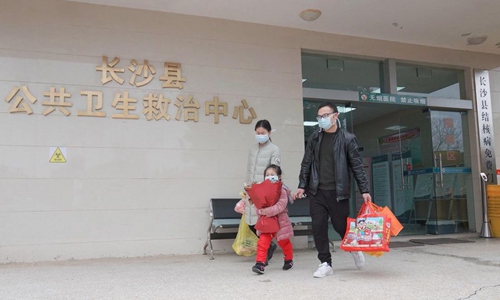 A 4-year-old patient leaves hospital with her parents in Changsha County, central China's Hunan Province, Feb. 1, 2020. The girl has been cured and discharged from the hospital. She is the first coronavirus-infected patient that was cured in Changsha County. (Photo : Xinhua)

Positive signs have emerged from the novel coronavirus outbreak as recovery rates have exceeded death rates in recent days and nationwide preventative and control measures have yielded positive results, despite the rise in the number of confirmed cases of the novel coronavirus.

As of the end of Sunday, China reported 2,829 new confirmed coronavirus cases, within which 2,103 were in Central China's Hubei Province where the deadly disease originated. The new numbers brought total confirmed cases to 17,205 as of Monday morning, and the death toll hit 361, surpassing confirmed fatalities of the SARS outbreak.

The total confirmed cases in Hubei also exceeded 10,000, accounting for over 60 percent of the total coronavirus cases in China, followed by East China's Zhejiang and South China's Guangdong in terms of current confirmed cases.

Data and analysis models designed to track the spread of the Wuhan coronavirus in China showed positive signs.

Although confirmed cases have been growing sharply in Hubei, other provinces recorded slightly moderate growths in confirmed cases, showing that locking down the epicenter is an effective countermeasure in containing massive human flows which are likely to add to the odds of accelerating the spread of disease.

"The inflection point for the nationwide campaign of fighting the coronavirus is expected in the near future," he said, noting that Hubei, however, is still facing a severe situation as the numbers keep growing, with both high critical cases and death rates.

Since the pneumonia outbreak and subsequent lockdown of Wuhan, residents have been encouraged to stay indoors, and persons who had been to Hubei are required to quarantine themselves for 14 days. The State Council, China's cabinet, also extended the Spring Festival holidays to contain the spread of the coronavirus.

As people are returning to work in first-tier cities like Beijing and Shanghai, increased human flows may pose fresh challenges to these cities in containing the spread of the virus.

Although the death toll of the coronavirus surpassed that of SARS in the Chinese mainland, analysts said the nature of the coronavirus is different. "Its infectiousness is much stronger than SARS, which has led to a significant surge in the number of infections, but the mortality rate is generally much lower than SARS," Yuan said.

Meanwhile, the outbreak which has spanned across  the Spring Festival holidays and the massive migration during this period has added difficulties for prevention and control efforts, he said. "It's also believed that with proper measures, the epidemic could be under control."

Also, suspected cases grew sharply on Sunday, with 5,173 cases being reported, the highest daily rate since January 21. With more test kits being distributed, helping hospitals to diagnose more suspicious cases, the number of confirmed cases is also expected to climb in the near future, according to analysts.

China has stepped up efforts to contain the virus. The Standing Committee of the Political Bureau of the Communist Party of China (CPC) Central Committee on Monday held a meeting, which urged accelerated research into the source and into identifying the transmission route of the coronavirus as soon as possible, and urged efforts to closely track the mutation of the virus.