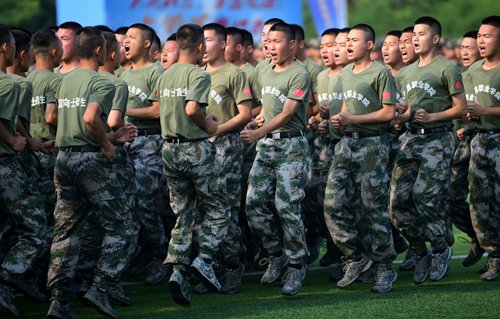 A military recruitment drive and press conference were held on May 31 at Wuchang Polytechnic College in Central China's Hubei Province to attract more young students to join the military.

At the ceremony, college students and non-commissioned officers studying in the college took part in military boxing and dagger gymnastics to get a taste of what military training is like.

It was the largest recruitment ceremony in the province in nearly a decade and the first news conference dedicated to recruitment.

The event aims to introduce the law and policies regarding military service, and encourage more youngsters to join the army.

Military service organs at all levels should keep up with the reforms of the military service system, strengthen research and innovation, make scientific planning and strict organization to effectively provide troops with high-quality personnel and complete the annual conscription targets and tasks, Zhao Haishan, the deputy leader of the provincial army recruiting group, stressed at the ceremony.

He called for various forms of promotion to encourage the majority of college-age youth to join the army and serve the country, and allow them to understand how they are responsible for national defense and security.

Ma Xu, one of China's first female airborne troops, gave a speech and launched an initiative for young students to join the army, which was warmly received by the audience. Ma was one of the winners of the 2018 "Touching China" awards, an annual award presented by China Central Television to honor 10 people as China's inspiring role models.