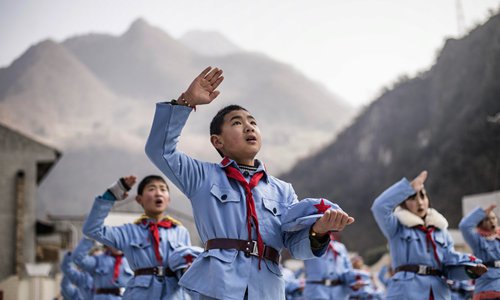 Singing revolutionary songs, reciting martyrs' stories, putting on performances that eulogize Chairman Mao Zedong. Such are the daily scenes of more than 200 Red Army primary schools across China.On campus, students wear Red Army uniforms, including octagonal caps and red scarves; in class they sing songs from the old revolutionary years, discuss the history of the CPC and learn the history of local soldiers.Red Army primary schools, which were initiated in 2007, are schools named after influential figures of past revolutionary periods, such as Mao Zedong Red Army Primary School and Deng Xiaoping Red Army Primary School, or significant events or sites such as Xibaipo Red Army Primary School. A nationwide project, Red Army schools aim to carry on the revolutionary genes while improving educational conditions for children in China's impoverished areas that used to be revolutionary bases, mainly through funds allocated from the project council and financial support from local governments.Red Army primary schools have been expanding across the nation over the past decade, following the footprints of China's Red Army, covering revolutionary bases in 29 provinces. As the scale of the project continues to expand, donations to the schools have also expanded from the initiators, who were mostly revolutionaries or soldiers and their relatives, to cover all of society."Calling them 'Red Army' opened a channel for donations from all people in our society," said Feng Haibo, vice principal at Bayi Red Army Primary School in Xibaipo, Hebei Province, where three primary schools are named "Red Army."

Demonstrating red principals"I'm [one of] the new generation of little Red Army soldiers. The blood of the predecessors surges in my body," are lyrics to a song titled "Song of Red Army Primary Schools," the official school song for the Xibaipo Red Army Primary School.The lyrics were written by Li Zhaoxing, China's former foreign minister, and writer Han Shengxun. The project council for the Red Army schools, which is in charge of fundraising, building and the management of these schools, issued it to all Red Army schools in 2011.After being named Red Army, three schools in Xibaipo compiled red textbooks. At Bayi Red Army Primary School, the textbook introduces the history of the school and the local area, followed by a chapter titled "Leaders in Xibaipo." In an article titled "Mao Zedong's Xibaipo Complex," it writes, "Mao has been very concerned about the well-being of the people in this unknown small village and missing them so much.""The textbooks need to demonstrate the principles of Red Army schools and the characteristics of primary education, which is examined and kept on record by education authorities," explained Feng. The school currently offers two classes every month about revolutionary traditions, and also organizes class meetings to let students tell the story of the revolutionary martyrs from their local area, and put on performances to learn about history. The culture of these Red Army schools has become a highlight of the county. The local education bureau encourages the schools to demonstrate their revolutionary tradition by performing on stage whenever there are big events in the county.Cultivating red revolutionary culture is a task that all Red Army schools are trying their best to accomplish.To experience what the Red Army went through in history, students from many Red Army schools across China imitate battle scenes, climb iron chains, use wheelbarrows to carry grain and lift rescue stretchers like ambulance men.At Loushanguan Red Army Primary School, the Young Pioneers from first to sixth grade are respectively named Loushanguan, Jinshajiang, Daluhe, and so on, which are important sites related to the Long March of the Red Army."This aims to get the Long March spirit penetrated into the entire process of the school's education," said Yuan Sihai, principle of the school. Yuqing Red Army Primary School, also in Zunyi, has integrated revolutionary education into its daily teaching. Even mathematics lessons there are special, where students need to resolve questions like calculating the distance of the Long March.In celebrating the 90th anniversary of the founding of the People's Liberation Army, all Red Army schools watched the films The Founding of An Army and Wolf Warriors II to enhance patriotic education.If there are any controversies about certain martyrs, such as Qiu Shaoyun and Lai Ning, the council calls on students and teachers to make a clear distinction between right and wrong, which requires teachers to be sensitive [about information input] in the Internet era.Carrying on the flagThe Red Army school project was initiated 10 years ago to carry on patriotism among Chinese youth.The primary school in Louguanshan became the first to be crowned "Red Army" due to the historical role of the Loushanguan Battle, which, in 1935, was the first battle the Red Army won during its Long March. This victory ensured the opening of the famed Zunyi Conference, a life and death turning point for the CPC.After the founding of the People's Republic of China in 1949, students and teachers from the local area volunteered to search for and bury the remains of the deceased Red Army soldiers. Then Xinhong Primary School also joined the seeking campaign. When the Red Army school project started in 2007, Xinhong Primary School in the area was renamed the "Red Army" and became the first Red Army school.The project, as introduced on the council's official website, was initiated by Li Ruihuan, former chairman for the CPPCC, along with the families of revolutionary pioneers including Xue Ming, wife of General He Long. Xue said the project was to "let the flag of the Red Army continue to fly in people's hearts."Many revolutionaries, previous Red Army soldiers and their families donated to the project. Xue herself donated 40,000 yuan ($6,046), her life savings, prior to her death in 2011. Zhuo Lin, wife of late Chinese leader Deng Xiaoping, donated 100,000 yuan.When the project started, some initiators had already died, so their children joined in, including Li Na, the daughter of Chairman Mao.Fang Qiang, secretary general for the project council, told media that they allocate about 250,000 yuan to each primary school relying on the donations from CPC members and Communist Youth League members nationwide, senior revolutionists' families and descendants of the Red Army soldiers.Aside from donations, local governments also provide financial assistance to help transform or rebuild the schools. For example, the Xibaipo school applied for 1.15 million yuan from education authorities for its rebuilding after being named a Red Army primary school in 2015.The school proposed for the "honor," as Xibaipo is a revolutionary base despite the fact that the local economy is underdeveloped. Many schools from remote revolutionary bases have managed to gain attention and educational resources from the government and members of society in this way.A donation channel

Over the past decade, many CPC and State leaders have made comments about the project. Every Red Army primary school features the slogan "Raising the Sun for Tomorrow," which was written by President Xi Jinping.Education authorities have also increased their support for Red Army primary schools. In 2015, the Ministry of Education held a football training program for teachers across China and set aside a special quota for Red Army schools. Nearly 200 principals and teachers joined in.The Red Army school project originally planned to help build only 80 primary schools, but today the number of schools has surpassed 230.Recently, eight Red Army schools in Jiangxi Province received 1 million yuan from Jiangxi military area command. In a widely circulated story, Fang Yaoxiong, a retired official in Shanghai who lives a very frugal life, including using furniture made in the 1960s, donated to Red Army primary schools 1 million yuan he had personally saved.Donations from enterprises have largely improved the hardware facilities of these schools. In Bayi Red Army Primary School, wooden desks that have been used for more than 10 years were now upgraded to iron desks. Each classroom also installed new projectors.The principal for Xibaipo Red Army Primary School, Chang Junguang, established a charity fund for education in Xibaipo, and also organized people from society to help poor students one-to-one. Since then, many large companies and prominent individuals have contacted Chang to donate money or supplies.Some enterprises have also begun to invest in infrastructure and tourism resources in the region, in the hopes of developing local real estate or taking advantage of the growing relationship between Red Army schools and local governments.