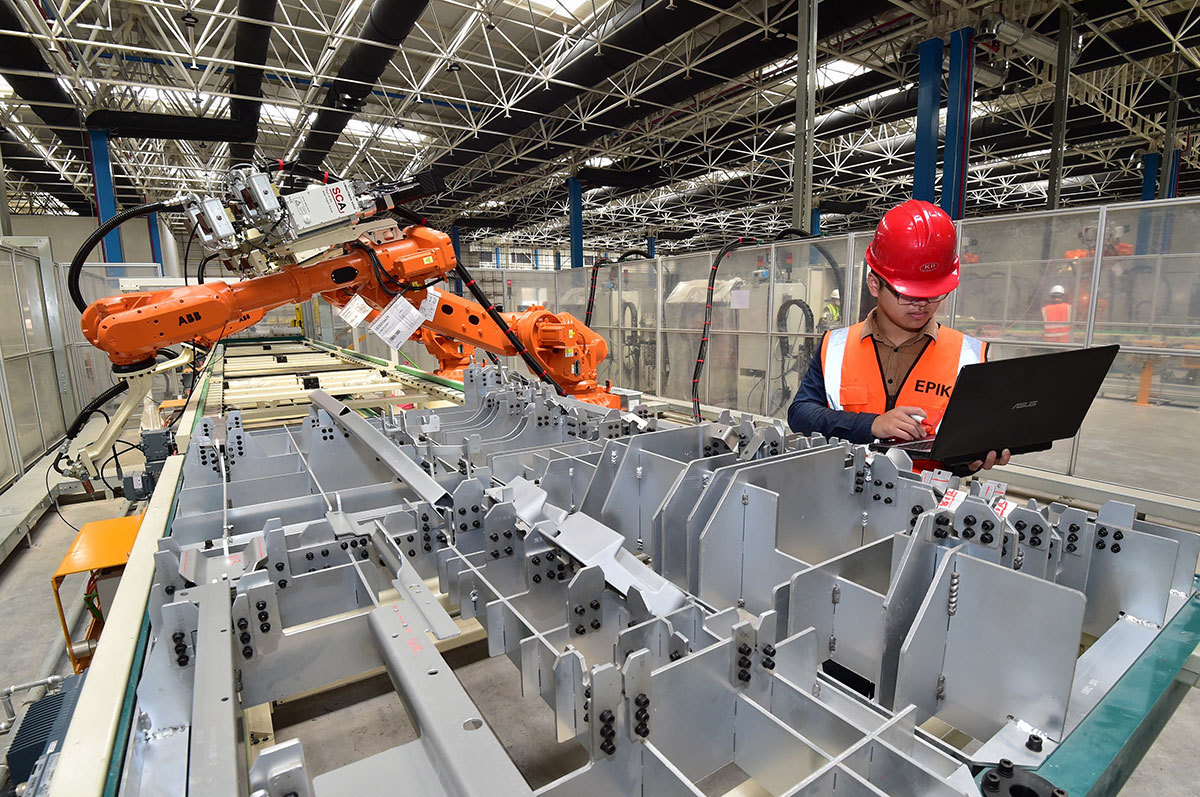 A technician programs an industrial robot at a factory of Geely Automobile Group in Yiwu, Zhejiang province. (Photo: China Daily)

Zhejiang province represents a juncture of China's past and future. The birthplace of the Red Boat spirit, the eastern province embodies the country's revolutionary hallmarks of innovation, hard work and dedication.

For the Communist Party of China's 90.6 million members, Nanhu Lake in the city of Jiaxing is far more than just a scenic attraction - it's the physical birthplace of the Party.

"Since June, at least 10,000 tourists a day have flocked to visit the lake at weekends, double the usual weekend average of tourists of around 5,000 to 6,000," said Lu Yi, deputy general manager of the Nanhu Tourism Development in Jiaxing. The higher numbers are due to both the upcoming 70th anniversary of the People's Republic of China and the summer holidays, Lu said.

In 1921, the first CPC National Congress reconvened in a red boat on the lake after being interrupted by authorities in Shanghai's French concession area. It was here the 13 delegates announced the official founding of the CPC, with the Red Boat becoming a symbol of the courageous and pioneering spirit of the early Party leaders. The meeting encapsulated China's revolutionary spirit.

In October 2017, the CPC's newly elected top leadership, headed by General Secretary Xi Jinping, visited the site, where they vowed to stay true to the Party's original aspirations and serve the people. It was Xi's first domestic trip after the 19th CPC National Congress. The congress elected a new CPC Central Committee and drew up a blueprint for the country's development in the coming decades.

"We cannot forget the road that we have taken no matter how far we march," Xi said during the visit.

That Red Boat spirit has strongly influenced the development of Zhejiang, an economic powerhouse that has evolved into a cradle of scientific and technological innovation over the past decade.

In 2003, Jiaxing Science City, a platform for innovation, was established to help upgrade the local industry.

Home to the Yangtze Delta Region Institute of Tsinghua University, the Zhejiang Institute of Advanced Technology of the Chinese Academy of Sciences and the Shanghai University (Zhejiang-Jiaxing) Emerging Industries Institute, it has successfully explored a new way to leverage the strengths of academic agencies.

Given the favorable conditions and availability of talent, a number of enterprises have set up in the city, according to Wang Liting, director of the science city's exhibition hall.

"Innovation has become the lifeline of all businesses in Jiaxing," said Zhu Jinsong, general manager of Jiaxipera, a leading manufacturer of refrigerator compressors.

His company is an international supplier and has partnerships with some of the world's biggest refrigerator manufacturers including Siemens, Bosch and Haier.

Jiaxipera is a leader in the development of small and variable-frequency compressors helping China to become a research and development hub for refrigerator compressor manufacturing.

The central government's elevation of the integration of the Yangtze River Delta region to "national strategy" status has helped Zhejiang's development of areas such as the digital economy, infrastructure, culture and tourism.

More than 200 key projects with a combined investment of more than 1 trillion yuan will be launched in the future, according to an action plan released in June.

On July 12, the provincial government listed three main tasks for this year: economic transformation and upgrading using the resources of Shanghai, and Jiangsu and Anhui provinces; greater opening-up of the province; and pushing forward with infrastructure to improve people's lives.

Che Jun, Party chief of Zhejiang, emphasized the importance of innovation in an article published in the Study Times on Aug 2, writing that the region would pursue innovation-driven development to help transform and upgrade local industries.

The G60 Science and Innovation Corridor, a high-tech manufacturing zone connecting Shanghai and eight other cities in the delta, is included in the integration plan and is intended to drive the region's technical and economic development. Initiated by Shanghai's Songjiang district, the G60 corridor takes in the cities of Hangzhou, Jiaxing, Jinhua and Huzhou in Zhejiang.

"The new technologies and innovative achievements in Shanghai are being transferred to Zhejiang, injecting new vitality into the province's high-quality development," said Nan Cunhui, chairman of the Chint Group, a leading industrial electrical equipment and new energy company based in Zhejiang.

Huang Xianhai, dean of the school of economics at Zhejiang University, said the delta region - covering less than 4 percent of China's land area - contributes one-third of the nation's foreign trade, accounting for roughly 60 percent of investment from abroad.

"There is no doubt that high-quality integrated development of the region will become a forerunner to tap a new path for China's economic development over the next 10 years," Huang said.

The Red Boat Spirit is also inspiring ecological restoration in the coastal regions of Zhejiang.

Dongtou district in Wenzhou is located on the province's southeastern coast, facing the East China Sea. In 2016, China initiated a project named Blue Bay with the aim of restoring the ocean ecology. Wenzhou was chosen as one of the first 18 pilot cities and Dongtou, with a seafront area of more than 2,700 square kilometers, was one of the ecological battlefields.

With financial support from the central government, a series of innovative measures targeting coastlines, wetlands and islands were undertaken in the district.

Dongao village in southeastern Dongtou has been a big beneficiary. According to Hong Qiuwei, head of the village, it used to be very difficult to develop maritime tourism in the village due to the underdeveloped and harsh geographical conditions.

However, the transformation of beaches and residential buildings, a result of the ocean restoration, has helped turn the tables.

Nowadays, the annual per capita income of the villagers in Dongao has grown to more than 20,000 yuan from 8,000 yuan in 2010. A sightseeing industry, with Dongao village serving as a key area, is taking shape in the district.